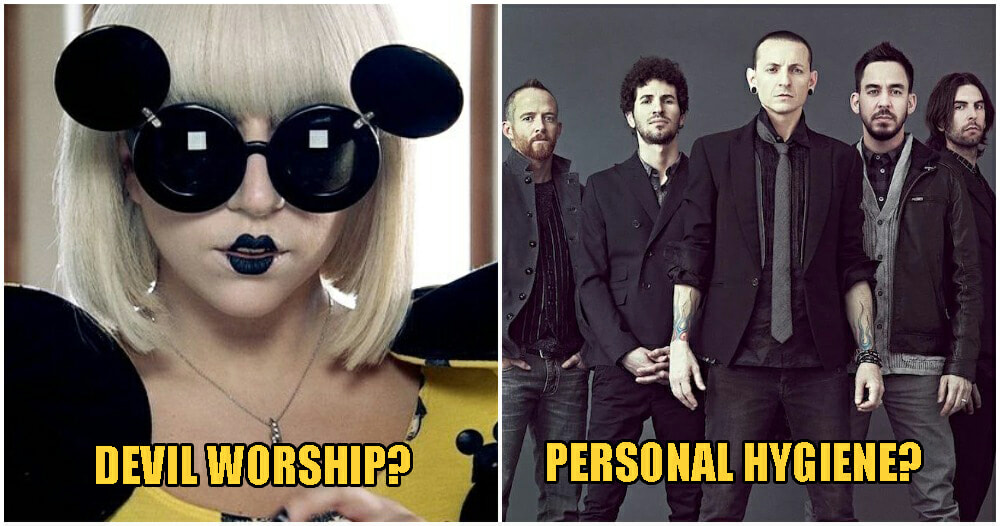 Disclaimer: We have absolutely NOTHING against the music that is being made now, but it’s pretty much an indisputable fact that the golden era for music was in the 90s and the early 00s.

Being born in the late 90s, many of us grew up listening to the music of the early 00s and catching their music videos on YouTube when the site was still new. I, for instance, vividly remember being a wide-eyed 11-year-old watching Boom Boom Pow on loop on YouTube.

However, listening to these songs and watching the music videos as kids and as adults is a totally different experience. As adults, we realise that the songs we listened to on repeat during our childhood don’t actually mean what we thought they meant. In fact, these songs often contain hidden messages and other details that we might not have noticed before.

1. “Mambo No.5” was about the singer’s sexual conquests

This 1999 super hit song by German musician, Lou Bega was a chart-topper and sold 2.3 million copies until 2013.

There was just something about the names of Monica, Erica, Rita, Tina, Sandra, Mary and Jessica that couldn’t make us stop hearing the song.

But did you know that while we sang the song unknowingly, the lyrics actually referred to Bega’s sexual conquests in different continents! Not only that, but this song was also embroiled in a plagiarism controversy. You can listen to the song that was allegedly the original version here.

2. “Mr Brightside” was about a cheating girlfriend

Admittedly, we’ve all yelled the lyrics to this song without really knowing what they meant, but turns out it’s actually pretty dark.

The first impression this song probably gives us is that the singer is someone who just looks at the bright side of life and is pretty much doing fine. But turns out, as you take a deeper look into the video, you can sense that the girl seems to be having multiple relationships.

Bustle reported that the singer Brandon Flowers had a gut feeling that his girlfriend was cheating on him and actually managed to catch her red-handed at a local bar.

In the days of Covid-19, our ears are used to hearing people requesting us to take good care of our personal hygiene, but who knew Linkin Park did it all the way in 2006?

It’s literally right there in the song title if you flip the words the other way round. In a video by WhatCulture Music, at the 5.21-minute mark, they explain that when played backwards, you can clearly hear Chester Bennington (RIP Never Forget) saying the phrases “You should brush your teeth” and “You should wash your hands” four times! So creepy!

4. “Hey Ya” was about staying in an unhappy relationship

You probably thought this song was just a peppy-light hearted number about having a good time, but does it actually mean that?

According to Unilad, you can notice a darker meaning behind the lyrics referring to people forcing themselves to stay in unhappy relationships.

This was even confirmed by Andre 3000 in an interview with MTV where he mentioned that it was about the relationship in the 2000s.

“It’s about some people who stay together in relationships because of tradition, because somebody told them.”

5. “Hey There Delilah” was inspired by a real-life Delilah

Confession time, I’ve heard this song multiple times with my head on the bus window and a made-up scenario playing in my head as I imagine myself going to meet my non-existent girlfriend.

Turns out the truth behind this song isn’t that far off!

According to Teen Vogue, the real-life Delilah was a competitive cross-country runner who  NEVER dated the lead singer of Plain White T’s, Tom Higgenson before. They met at a party once and he actually wrote the song in hopes of impressing her. Who knew?

Okay, admittedly this one is a bit out there but hey, sounds fun?

So, in a video by WhatCulture Music, at 6.49, the narrator explains that if you play this song in reverse, the phrase “Evil save us, these stars above, we model it on the arts of Lucifer!”

7. “Cry Me A River” was Justin Timberlake throwing shade at Britney Spears

If you think Taylor Swift was the only expert in throwing shade ar her exes in subtly written songs, think again!

Justin Timberlake wrote this song with Britney Spears in mind according to Song Facts. Music producer, Timbaland, said that after a heated phone call with Spears, Justin Timberlake just vented his frustration into the song.

You can even notice that the actress who plays his girlfriend in the video looks A LOT like Britney Spears.

8. “When September Ends” was the artist’s way of dealing with his father’s death

You probably would’ve known that this sombre song by Green Day wasn’t actually about a couple dealing with the guy’s deployment to Iraq for the war.

Instead, the song was actually about Green Day’s lead singer Billie Joe Armstrong dealing with his father’s death from cancer in 1982 when Billie was just 10 years old.

According to y101fm, at his father’s funeral, Billie cried, ran home and locked himself in his room. When his mother asked, he just said “Wake me up when September ends” hence the inspiration to the song’s title.

Not only that, Americans mostly associate the month of September with the 9/11 tragedy, so this song also deals with handling the loss of your loved ones.

What are some hidden messages from your other favourite songs that wasn’t mentioned? Let us know in the comments section!

Also read: This Is NOT A Drill, Backstreet’s Back & Plans To Tour With NSYNC In A 90s Concert Dream Come True!