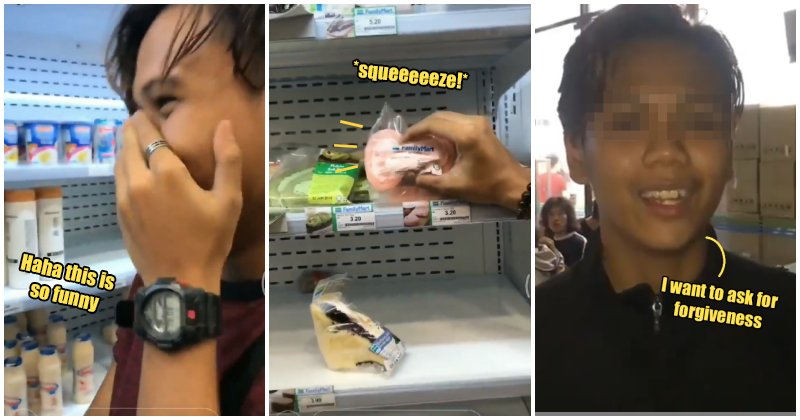 Following the backlash received by some boys who thought it would be funny to video tape themselves crushing and vandalising food items from FamilyMart, the boys have since released a video explaining and rationalising their behaviour.

The video starts off with the videographer informing the public that the video is meant as an explanation for what they had done, before Luqman launched into his speech.

“Don’t simply talk, do your research before speaking. All that I did earlier (referring to the video of him vandalising the food items), I had already purchased the items prior. I’ve already taken the items away. I had bought the items already. I’m not stupid to go and vandalise the items. Use your brains.”

Luqman’s friend also made weird faces, belted out a line from Taylor Swift’s ‘Shake it off’, going ‘haters gonna hate, hate, hate’ and ended the video by saying something along the lines of “You are not us, so be quiet”. 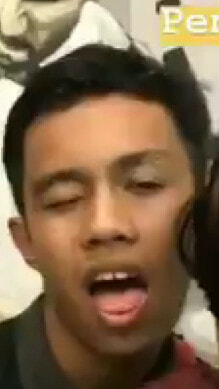 In the midst of the video, the videographer took the opportunity to showcase the CCTVs in the store while adding his own opinion.

“Do you think we would simply do anything, if you can see there are so many CCTVs. There were also people behind us.”

Little did they know that netizens wouldn’t take too kindly towards their explanation, as they felt it lacked remorse and instead overflowed with arrogance.

This comment reads, “Show the receipt. There is no plastic packaging on the table or the bottle he opened. And he’s vaping.”

This comment goes, “Not entirely sure if he was born stupid or just enjoys being stupid.”

After adding fuel to the fire they started, the added backlash probably hit them where it needed to as Luqman released another video on his Instagram, this time apologising for his behaviour and actions, though the apology video basically contradicted everything he said in the explanation video.

“Assalamualaikum, I am the boy you saw in the viral video where I was pinching the breads and drinking from the unopened bottles. I’d like to ask for forgiveness from the netizens who had to watch that unpleasant video. I’m currently at FamilyMart, I want to apologise to those working here and I take responsibility to pay for the items (so he lied when he said he had bought the items prior?). Thank you and I will never do it again.”

It’s no surprise that netizens are still not having it, questioning his sincerity.

Merida’s posting has since garnered over 4,700 shares.

We hope these boys have now learnt their lesson. That it does not pay to do stupid stunts like this! 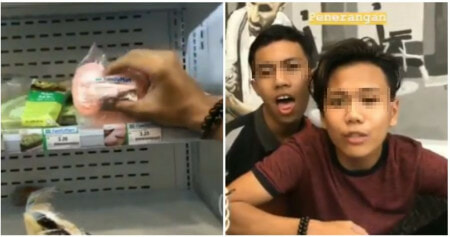