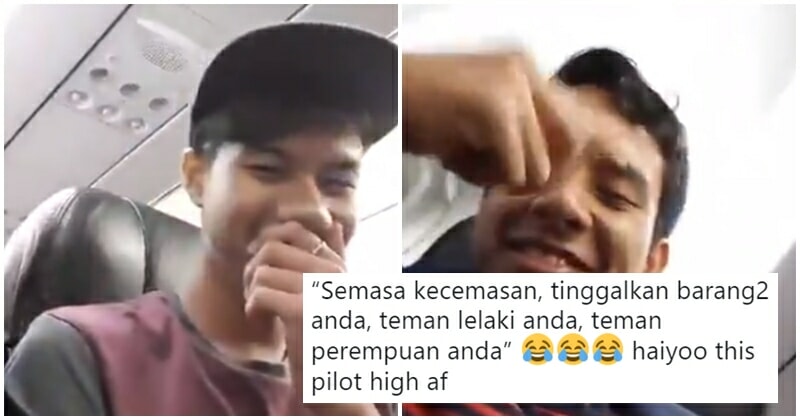 Flying might be the fastest way to travel but you don’t have to look very hard to find plenty of reasons to hate it.

Picture being stuck in a big stinky cabin, surrounded by people who make it their life mission to annoy the crap out of you.

But sometimes they can be great too! Add an attentive flight attendant or a brief waiting period and it is easy to find the positives when it comes to flying.

Taking to Twitter, netizen @AzrulAkmal1216, shared a tweet of his experience boarding an AirAsia flight that featured a rather hilarious announcement made by a senior flight attendant.

In the 1-minute video clip, began his safety speech,

“In the case of an emergency, please leave behind all belongings…your boyfriend…your girlfriend…and leave the aeroplane.”

“In the case of a fire always remember to ‘tunduk…tunduk…tunduk’…and use the illumination on the floor to guide your way out.”

But he did not end there.

“These emergency instructions are made available on the safety leaflet included situated in the back pocket.”

“Please read them carefully. There many interesting pictures in them… except me.”

“We would like to remind you that this is a non-smoking flight, and smoking in the lavatory will trigger the fire alarm (makes an odd beeping sound).”

It is always nice to see how people go out of their way to make others feel more relaxed during a flight.

Netizens responding to the tweet were in full praise of the cabin crew. 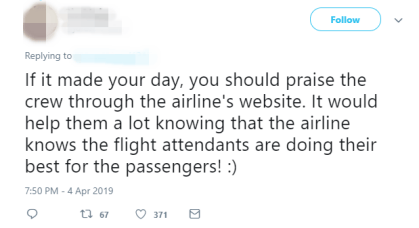 One netizen wrote, “If it made your day, you should praise the crew through the airline’s website.”

“I would help a lot knowing that the airline knows the flight attendants are doing their best for the passengers.”

Listen to his hilariously cringy English announcement as well

@AzrulAkmal1216‘s tweet also received a response for the flight attendant responsible for the hilarious announcement himself.

Salam bro akmal, can i have this for my staff performance record ? If u dont mind 😉

His response writes, “Salam bro Akmal, can I have this (video clip) for my staff performance record? If you don’t mind.”

It pays to do well at your job, doesn’t it? 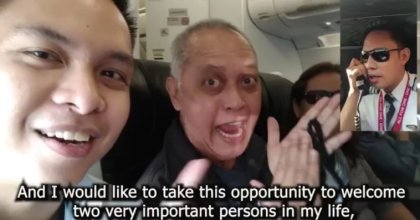