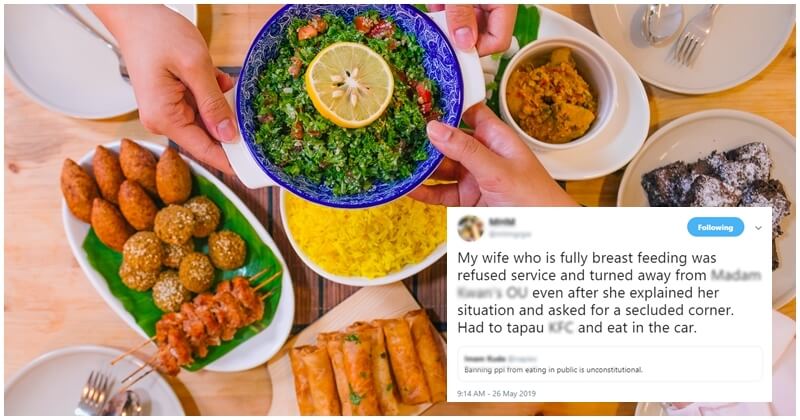 Fasting in the month of Ramadan is one of the five pillars of Islam, and it is necessary for every Muslim to fast.

However, there are specific provisions that allow the individual not to fast, such as illness, menstruation, travelling, and in this case, being a breastfeeding mother, as it is widely known.

Even then, a woman was not allowed to have her meal at Madam Kwan’s One Utama where the staff refused to serve her! 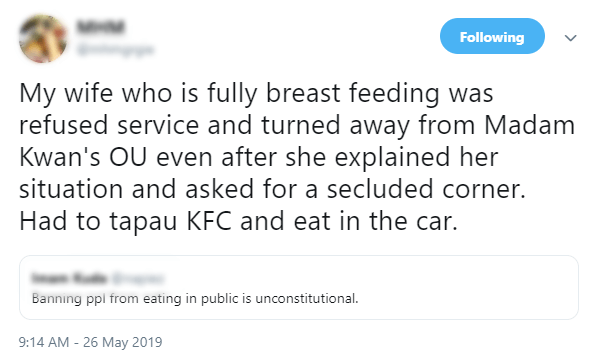 She even explained to the staff that she was breastfeeding and was thus allowed to eat according to the faith, but they didn’t care. In the end, she had to tapau KFC to eat in the car after.

Madam Kwan’s actions are, according to some netizens, against the law.

Netizens, however, were divided on the tweet with some stating that there is nothing wrong with eating takeaway in a secluded area.

Another also lamented on the fact that there is nothing wrong with not eating at a restaurant. They write, “There is no fault in buying Subway or chocolates and eating in the car or in a toilet. You won’t die, right? Do not force the restaurant staff to commit an offence.” 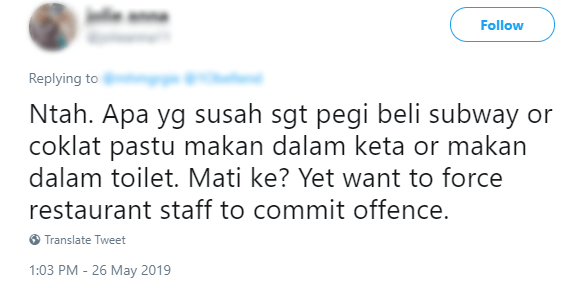 To understand the reason as to why some restaurateurs refuse service to fasting Muslims, we need to look at the Syariah law in place.

As the law differs from state to state, an example of a Syariah law that prohibits the selling of food or eating in public is one that is highlighted in Selangor’s Section 19 of Syariah Criminal Offences. It states that,

Any person during the hours of fasting in the month of Ramadhan who – (a) sells to any Muslim any food, drink, cigarette or any form of tobacco for immediate consumption during such hours, or

(b) openly or in a public place is found to be eating, drinking or smoking,

shall be guilty of an offence and shall on conviction be liable to a fine not exceeding 0ne thousand ringgit or to imprisonment for a term not exceeding six months or both.

So as you can see, it is not entirely the restaurateur’s fault for denying service.

But not all hope is lost as one netizen shared her experience attempting to feed her adult autistic son in public. 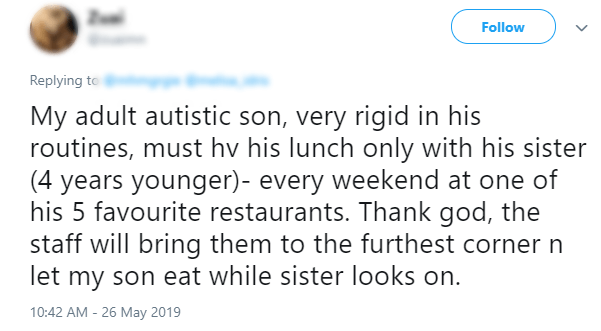 One netizen responding to the tweet congratulated the staff for doing the right thing.

Based on the arguments given in the above, there is a need for the State Religious bodies to lessen the rigidity of Section 19.

While most Islamic scholars believe that breastfeeding women can eat in public during Ramadan, it seems that our local Syariah laws haven’t caught up.

Should religious bodies lessen their stranglehold? Or should restaurateurs rely on their own discretion when it comes to feeding Muslims in public? Share with us your thoughts in the comments section.

Also read: 102 People Kena Kantoi Eating in Public Locations in Johor, Get Arrested for Not Fasting 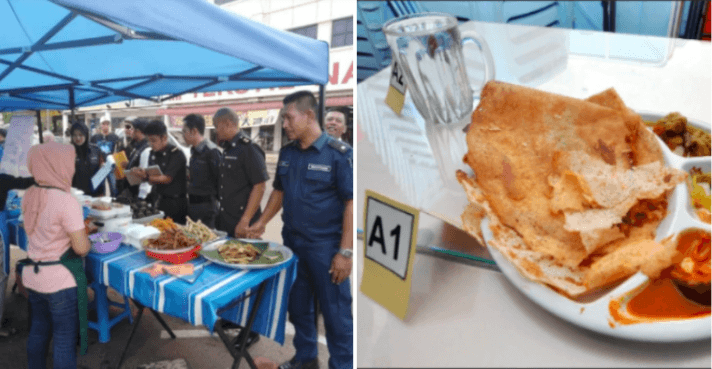