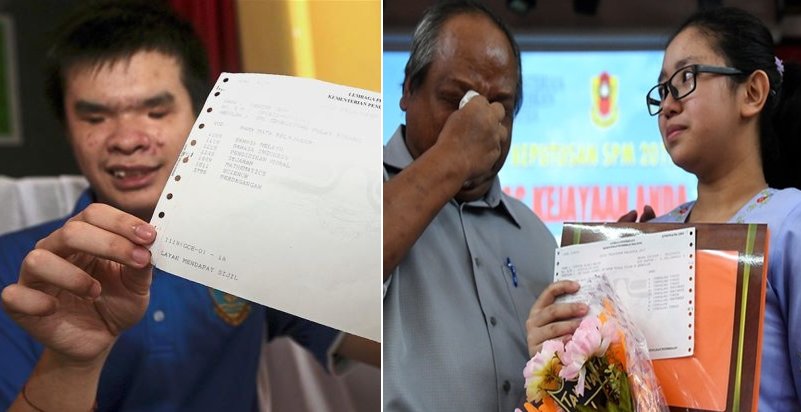 SPM results came out on 15 March! And a lot of us who sat for our SPM examinations years ago probably remember attending a ton of expensive tuition classes and buying a bunch of pricey, inch-thick revision books to prep for our exams. For some reason, many of us, as well as our parents, always had the mindset that the more we spend on tuition fees, reference books and herbal suppliments, the higher our chances of scoring straight A’s.

Then again, are all these really necessary to score good results? Well, we found a couple of incredibly inspiring students who prove that you can come from any type of background, or financial status–whether rich or poor–and still be able to achieve stellar results: 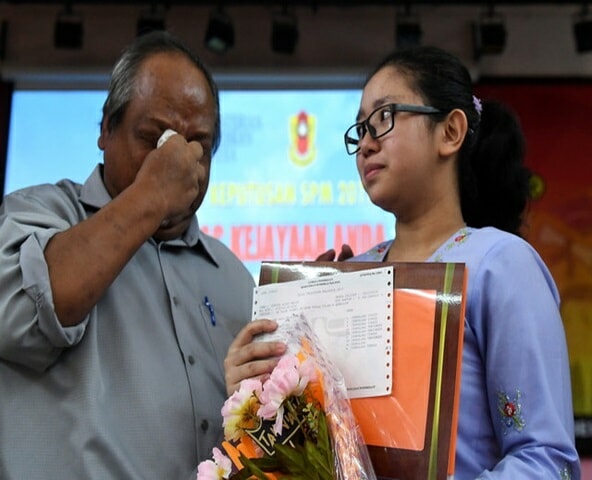 According to Bernama, Sufiza, 18 is the seventh of nine children who went to Sekolah Menengah Sains Tuanku Jaafar. With a monthly household income of just RM500, Sufiza made a promise at the young age of 13 that she would work hard and even decided to live in the hostel of her school. She did this so she wouldn’t have to trouble her parents and travel 30km everyday to and from school. 30km, say what!?

“I don’t want to be a burden to my family, so no matter what I had to study hard and I’m grateful that my effort and sacrifices paid off with my 9A’s result. I really didn’t expect it.

“Coming from a huge family, I’ve never experienced the easy life that other families experience. In view of this, I wanted to use my studies as a way to prove that even the orang asli can succeed like everyone else,” Sufiza says.

And she did it! She proved her point. You go girl! 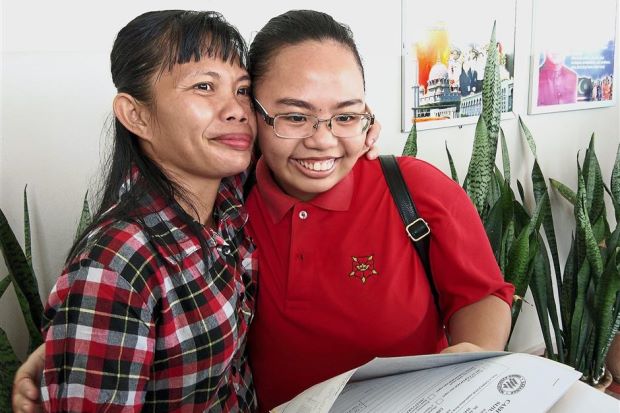 According to The Star, Rhana, 18 an Iban girl who lives in abject poverty and studied in SMK St. Elizabeth had managed to score 4A+, 4A and 1A- for her SPM examinations.

However, life was never smooth sailing for Rhana. Her father was the sole breadwinner of the family of five but only worked as a construction worker with an unstable income.

“Rhana’s father is paid on a daily basis and does not work when it rains, so it can be a struggle to put food on the table, especially when it’s the monsoon season,” Rhana’s mother, Kelang Lawang said.

Furthermore, because of their financial difficulties, Rhana’s family could not afford to send her for tuition classes.

“We have no money for tuition, she only studied with her friends and used her textbooks,” Lawang added.

It goes to show you really don’t need pricey revision books or tuition classes to succeed if you really put your heart into it!

Rhana, whose ambition is to become a counselling teacher in the future also highlighted that the reason she was motivated to do well was because she wanted to be a good example to her two other siblings. 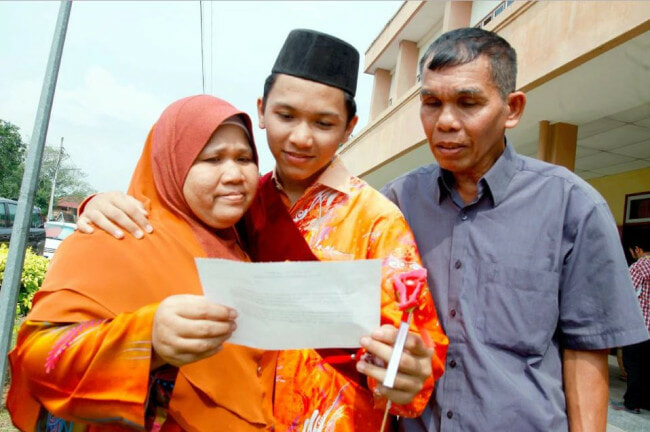 “Getting good results would’ve been enough for me, but I was shocked to find out I was one of the 16 “pelajar cemerlang” (brilliant students) of my school who scored 11A’s.”

According to Berita Harian, Amir, 18 who studied in Sekolah Menengah Kebangsaan Agama Al Irshad happens to also be the son of a humble factory worker.

Unlike Sufiza, Amir did not live in his school’s hostel. Instead, he travelled to and from school everyday which made his revision time inconsistent. However, because of this, Amir made sure he paid full attention during classes and would get help from his classmates. His parents also never pressured nor scolded him about his studies, rather, they would just advise him accordingly.

“This is how I managed to score so well,” Amir explains.

4. Muhammad Zharif, son of a burger seller who scored 11A’s 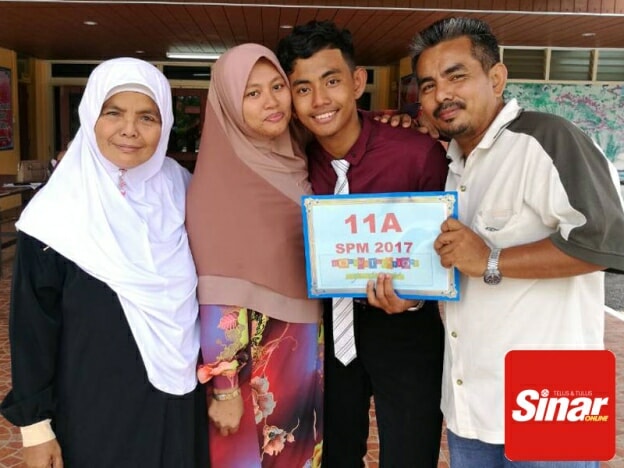 Zharif, 17 from Sekolah Menengah Kebangsaan Agama Baling who scored only 5A’s during his SPM trials was shocked when he found out that he had scored 11A’s for his actual SPM examination.

According to Sinar Harian, even Zharif’s parents were only expecting him to achieve “normal results”.

“When the teacher read out his results in the hall, my wife, mother and myself couldn’t hold back our tears,” said burger seller Fazli Mohd Desa, father of Muhammad Zharif.

Even the counselor of his school stated that, based on his trials results, all his teachers only expected Zharif to get roughly 7A’s for SPM, not 11.

“After my trials, I started to pay more attention to the subjects I didn’t score well in and thankfully, my hard work paid off,” Zharif said. 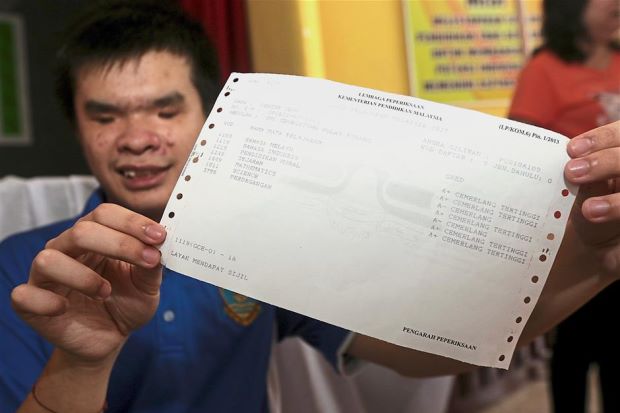 Yeoh, 18 from SMK Georgetown who was born blind, is the youngest of three siblings. According to The Star, Yeoh emerged as one of the top scorers in his school with 5A+ and 2A-.

With his results, Yeoh plans to study Computer Science so that he can develop software to help the blind and deaf community in the future.

“My ambition at first was to be an inventor, but I realised it would be impossible as I would not be able to do so physically.

That’s when I decided to learn programming. It’s something that interests me,” Yeoh said.

Yeoh’s father, Chin Yeau, 56 said that he would drive his son 45 minutes everyday to send him to school on the island as Yeoh’s friends were all here.

It was all worth it in the end for Chin Yeau and his wife, Thee Suh Pyng, 53 when they learnt of their son’s achievements.

Well, that’s it for today, but of course there are hundreds and thousands of other successful SPM scorers out there, and if you’re one of them, we at WORLD OF BUZZ want to congratulate you on a job well done! Time to treat yoself!

On the other hand, if you didn’t get the results you were hoping for, don’t be downcast! SPM results is not your whole life, plus, you can always try better in college or uni! Just do your best and keep moving forward!

Also read: 11 Inspiring Life Lessons We Can All Learn From Robert Kuok in Rare Interview 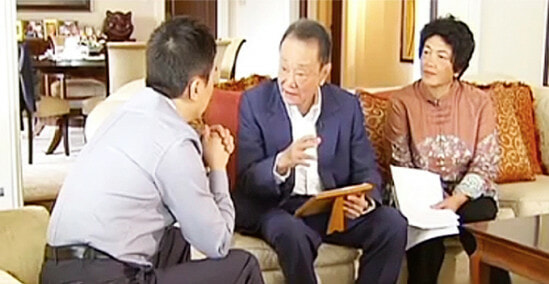