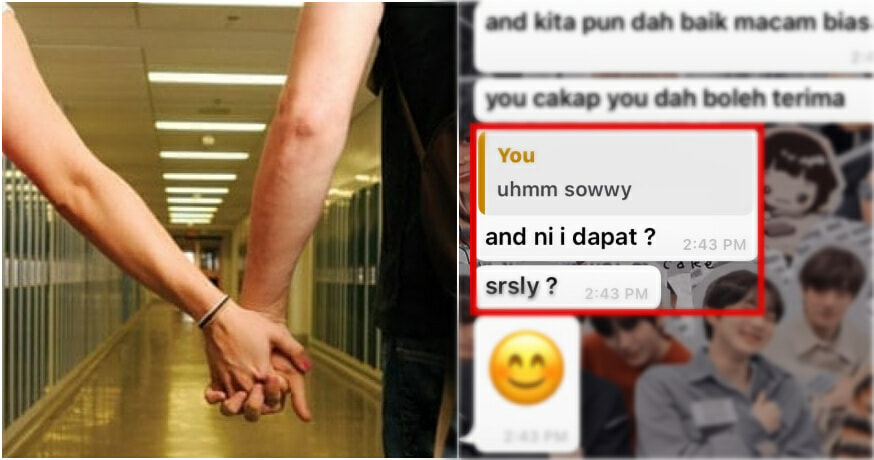 Sending your personal nudes to someone requires a lot of trust, and even then it’s still a risky thing to do. So, it’s totally understandable if you’re uncomfortable doing so and refuse to send lewd photos to others no matter what. But what happens when the person you’re dating feels entitled to your nudes even after you say no?

This is exactly what happened to 16-year-old Twitter user @fatenllysa just a few days ago when her boyfriend demanded she sends him her nudes.

In her tweet, she writes: “We only started dating yesterday and we broke up just now at 1pm… the story is he asked me to send nudes to him and I was like woah man I’m not gonna do that because it’s my privacy, then he can’t accept it just because I didn’t do what he asked…”

I’ve been couple w him baru2 ni like yesterday and we just broke up just now at 1pm..the story is he asked me to send nudes to him and i was like woah man I’m not gonna do that bcause it’s my privacy,,then he can’t accept it just because I didn’t do wht he asked… pic.twitter.com/PMaxQB3RPk

It started with her boyfriend asking her for nudes, to which she gently refused by saying sorry. But instead of taking the rejection like a champ, he goes on a rampage instead.

He writes: “Sorry? What do you mean? You’re lying, right? You said okay to everything earlier, and we were talking like normal. You said you accepted me, and this is what I get? Seriously?” along with a passive-aggressive smiley face emoji to match. 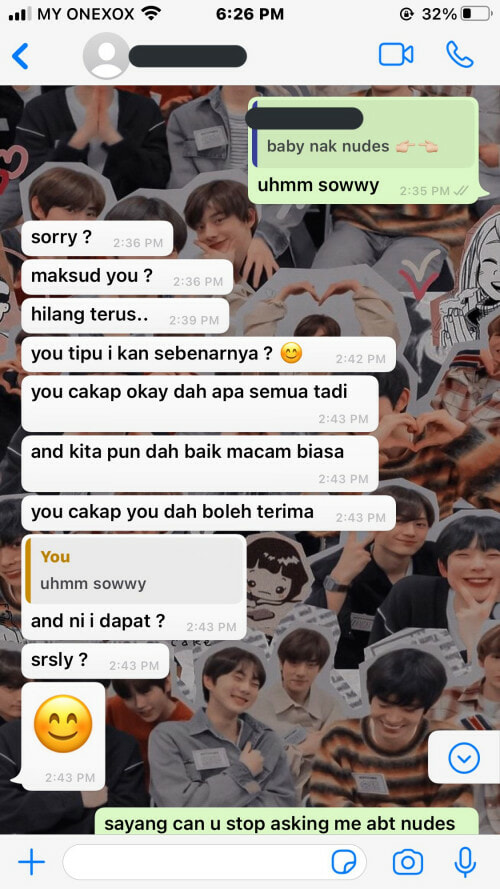 @fatenllysa tried to explain that she just didn’t feel comfortable sending him lewd photos of herself, but he refused to listen and instead continued to scold her and blame her for the situation. 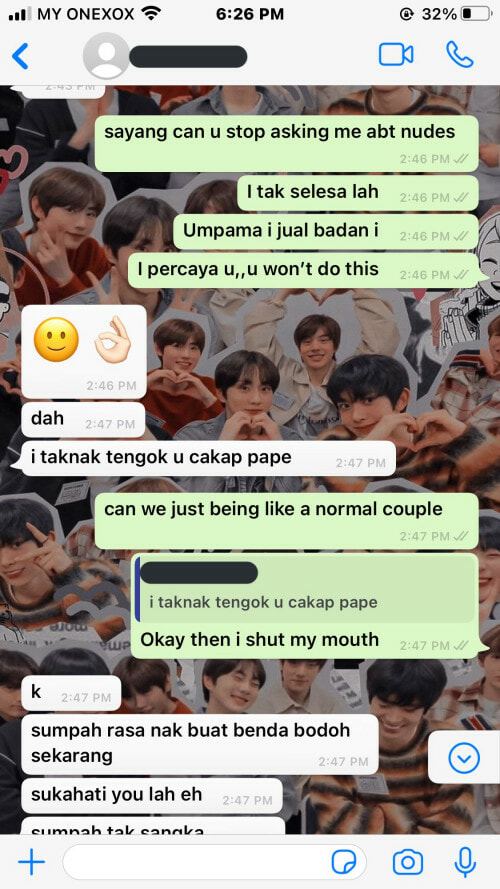 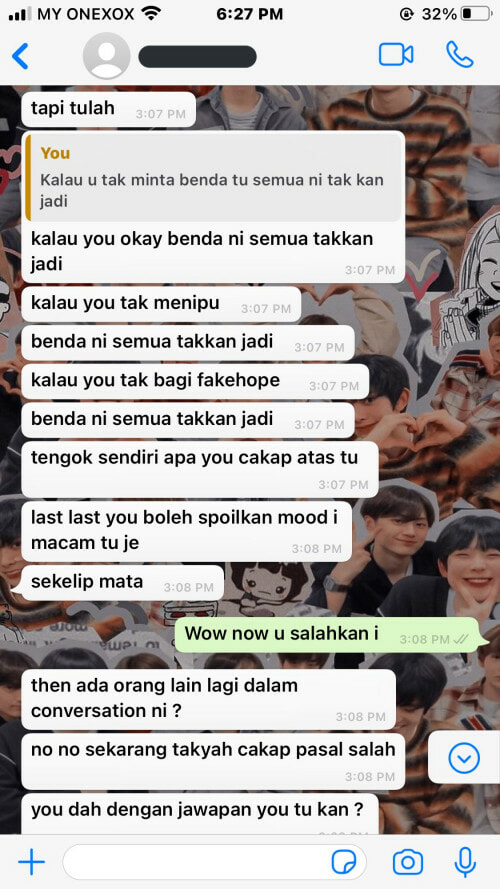 And to add insult onto injury, the guy then proceeded to guilt-trip her into thinking it was her fault for not trusting him!

“Don’t think you’re the only one who’s wrong, I’m at fault too. But when I’m with you I throw all those thoughts away because I TRUST YOU.” 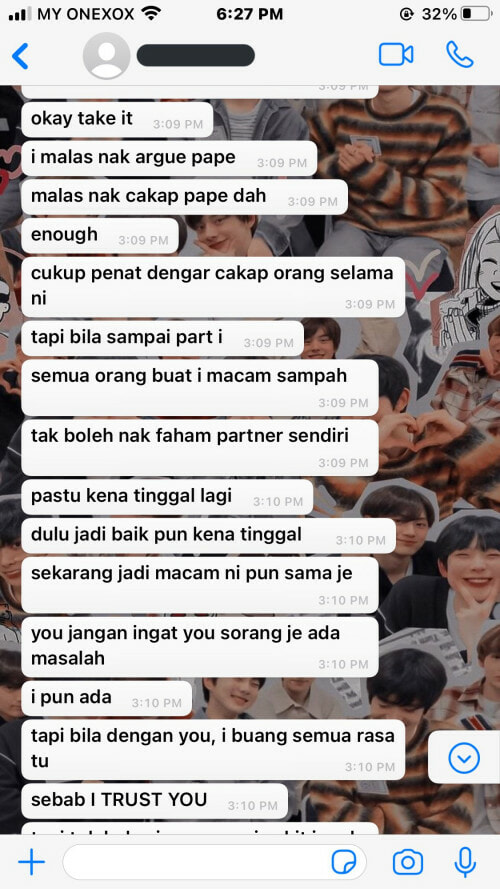 Fed up with his attitude and total disrespect towards her wishes, she decided to just break up with him right then and there. 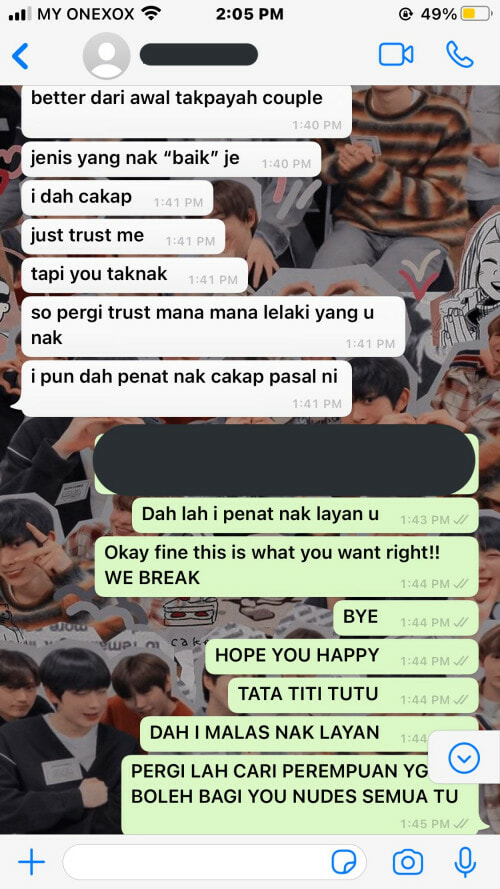 To finish up her whole Twitter thread, she warns other girls from possibly experiencing something similar: “I’m sharing this with everyone to remind girls to be wary of who you talk to, you can’t simply trust anyone, not even your boyfriend!”

I tunjuk ni sebab nak reminds to all the girls out there be careful siapa you berkenalan sekarang,,tak semua orang kita boleh percaya even your boyfriend pun u tak boleh 100% trust him!! please girl, be aware!!

Needless to say, that boy needs a lot more growing up to do before he can be in a proper relationship. Well, what do you think? Tell us in the comments!

Also read: Malaysian Girl Spreads Nudes of BF After Finding Out He Cheated on Her