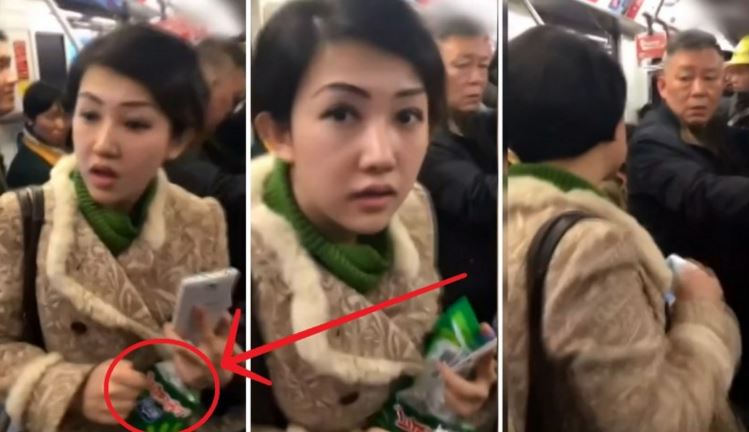 A lady who went onto the train last week appalled a few passengers for her uncivilized behaviour.

The lady was munching on some chicken feet while riding the subway and surprised everyone on the train when she spat out the chicken bones to the ground, littering the floor.

A few passengers criticized her for her disgusting actions to which she did not take lightly.

When she did not respond to the accusations, a passenger starting filming her in attempt to threaten her to behave.

The offended lady began cursing back at the lady asking her to shut her mouth and deny all accusations that she spat the chicken bones.

“When did you even see me littering?” asked the accused.

“Isn’t what you’re holding the same snack disposed on the floor?” replied the passenger.

“What I’m holding is the same to what’s on the floor doesn’t mean it’s evidence.” further denying the accusation.

She added by asking the passenger rudely, “which eye on your ass did you see me littering?”

A man who stood behind her quickly interrupt, saying “I saw it with my own eyes that you did!”

The argument went back and forth a little with the lady giving bad come backs to try to deny her mistake. Die die always don’t want to admit mistake.

The man who was assumed to be filming the whole situation asked everyone to stop arguing with her, “don’t follow her saying these dirty words. Her doing these kinda acts already proved she has a dirty heart. Her person as a whole wouldn’t be clean either.”

Apparently, netizens said that the lady was a professional violin teacher. I hope her music isn’t as crude as her personality.