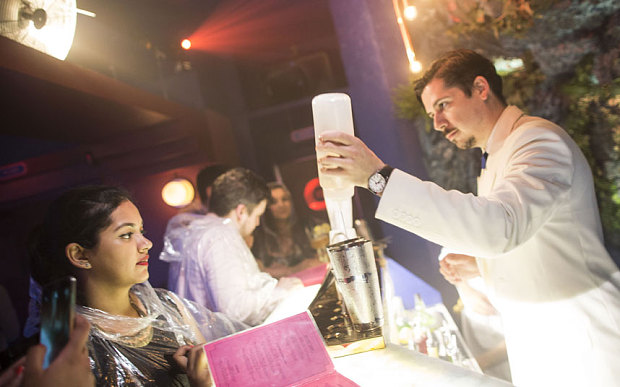 Brought to you by two genius bartenders, Sam Bompas and Harry Parr, they have created a bar filled with vapour cloud that contains gin, alcohol, water and aromatic plants.

The bar in London called Alcoholic Architecture has its interior set to 140% humidity. Customers are given a raincoat poncho before entering the misty chambers. Customers are encouraged to breathe in deeply while lounging. 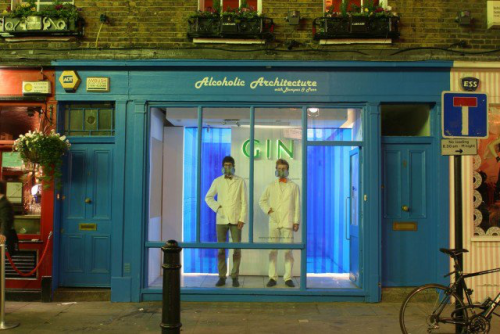 Alcoholic Architecture is located in London adjacent to a cathedral

Customers are given plastic ponchos before entering

Though visibility is less than three feet, Bompas pointed out the sensory advantages of the ambience to Bloomberg:

“It’s like going to the seaside and finding that fish and chips taste better. Part of that is that in a human environment, your ability to perceive taste is heightened. It’s the opposite of being in an aeroplane. Alcohol tastes better, with more nuances: You can detect more subtle flavors when it is humidified.”

For those who are looking to have a good time, inhalation is a very efficient means to that end. While drinking requires the alcohol to travel through the stomach and intestine before entering the bloodstream and reaching the brain, inhaling it produces an almost instantaneous effect.

Bompas explained to Wired that the time spent in the bar is correlated with the level of intoxication:

“An hour is approximately the equivalent of one drink. A strong one.”

However, Bompas said that no one got a hangover yet.

“Anecdotally, no one is getting a hangover. Maybe it’s a placebo effect, but I’ll take it.”

Entry to the bar costs 10 pounds ($16) during regular hours and 12.50 pounds ($20) during peak times. Guests are only given one-hour time slots so that they don’t become overly inebriated, and monk-themed mixed drinks for sharing include one served out of a human skull.