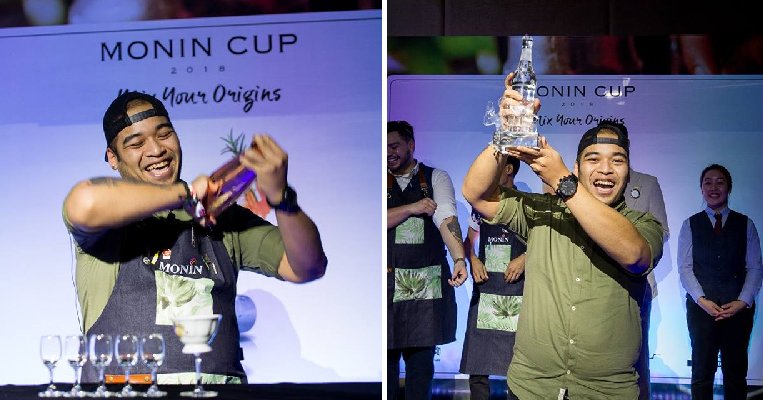 You’ve probably heard the term mixology before and thought that it’s a new term. However, this term has actually been used since the mid-19th century to describe the art of the cocktail. If you are a cocktail enthusiast, you may have also heard of Monin before, a brand that started in 1912 by Georges Monin when he was only 19 years old in the small city of Bourges, central France. 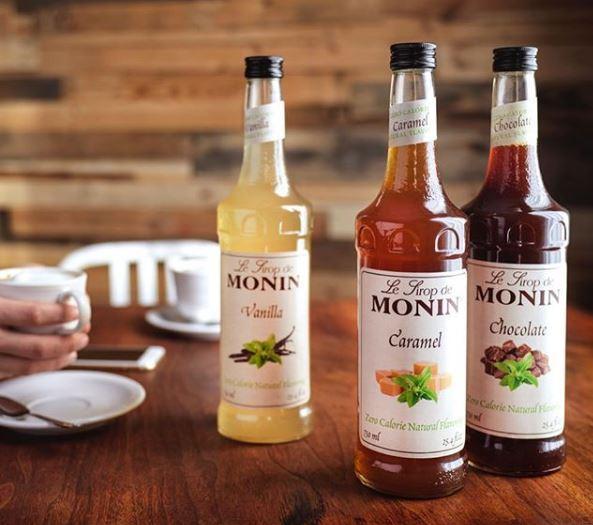 Monin is arguably one of the world’s leading producer for beverage makers from all walks of life who want to think out of the box. They create some of the finest flavoured syrups, gourmet sauces, and fruit smoothie and cocktail mixes available from premium and authentic ingredients.

This year, the biennial Monin Cup is back and the Asia Pacific Monin Cup Final 2018 recently took place on October 23 at Deep Blue @ The Face Suites in Kuala Lumpur and WORLD OF BUZZ was there to witness this spectacular event. This prestigious competition pits professional bartenders under 28 years old with the theme for 2018 is “Mix your origins”. Contestants had to come up with original cocktail recipes inspired by local ingredients and Monin products. 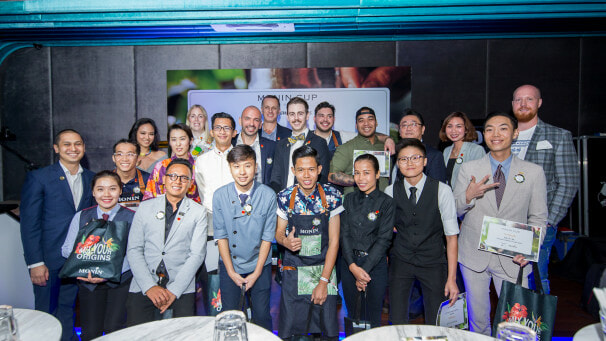 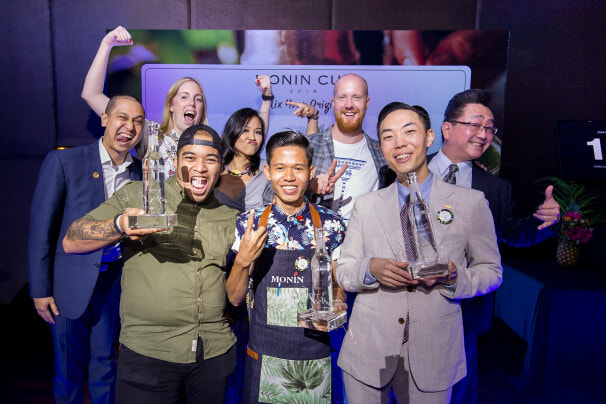 Winners of the APAC Monin Cup Final will have the chance to participate at the Monin Cup International Final in France in December and this year, we’re proud to announce that two young Malaysians got into the finals. Congrats!

One of them is 19-year-old Ivon Soon who is still a student at Berjaya University and the other contestant is Dino, a passionate bartender who has been in the industry for seven years and also competed with mixologists from Asia Pacific. 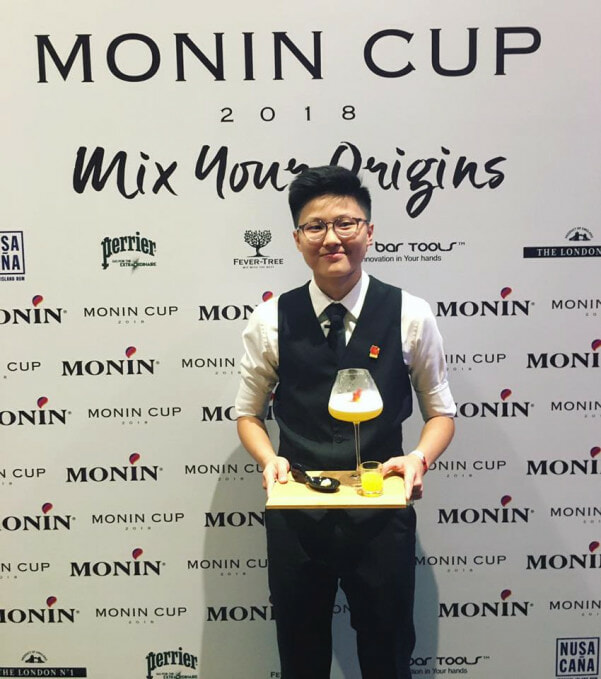 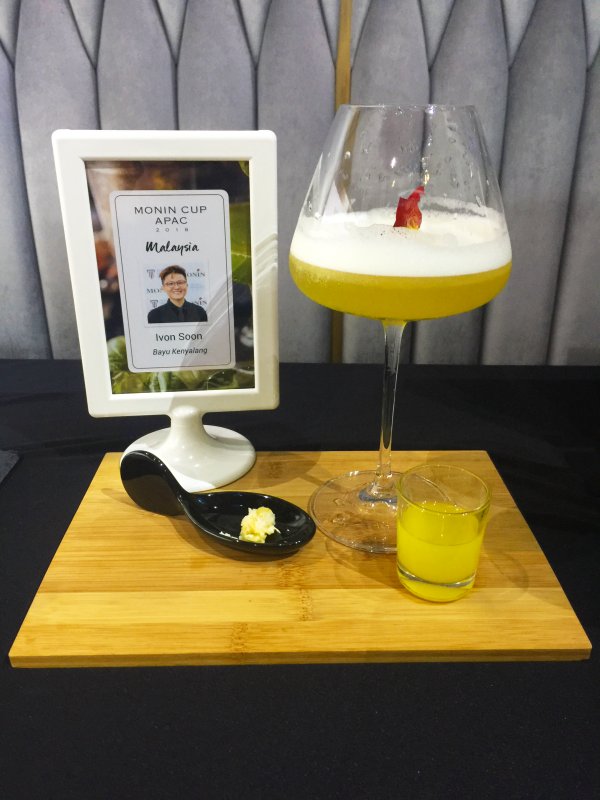 Ivon served up a yummy concoction known as “Bayu Kenyalang”, which is inspired from her Sabahan roots as the drink was made of tuak, bambangan (a fruit found only in Borneo), gin, spicy sesame oil, kaffir lime leaves, calamansi, egg white, Monin Spicy Mango Syrup and Elderflower Syrup. Meanwhile, Dino’s recipe was called “Kiss Me Later” with a durian theme that was inspired by his wife. That’s sweet! 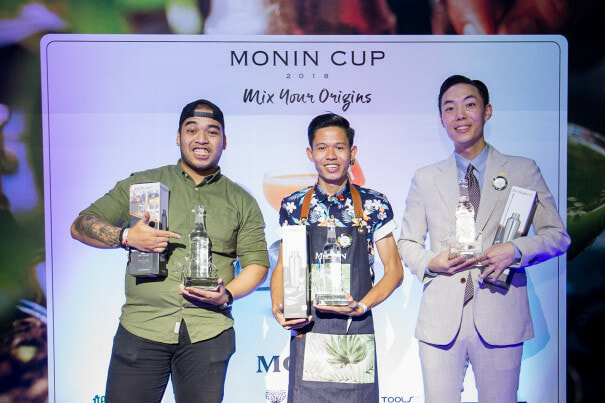 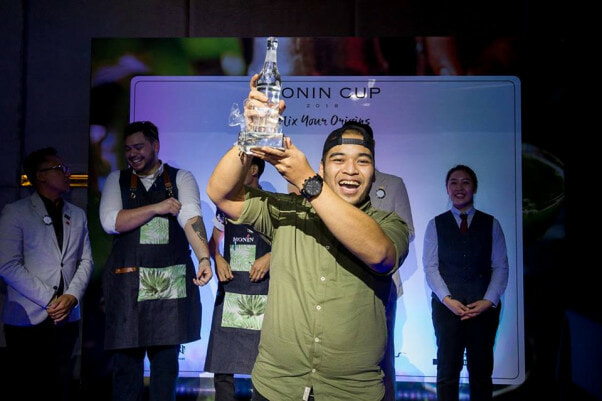 Dino’s cocktail was so awesome that he managed to get through the semi-finals and after that, he was announced as the second runner-up in the finals. Yes, that means he will be representing Malaysia in France! The champion was Nyan Min from Myanmar and the first runner-up was Son Seok Ju from South Korea. We had the chance to sit down with Dino himself and chatted with the 25-year-old mixologist about his journey in crafting cocktails, where he gets his inspo from and tips on making it in the F&B industry.

How Dino got started 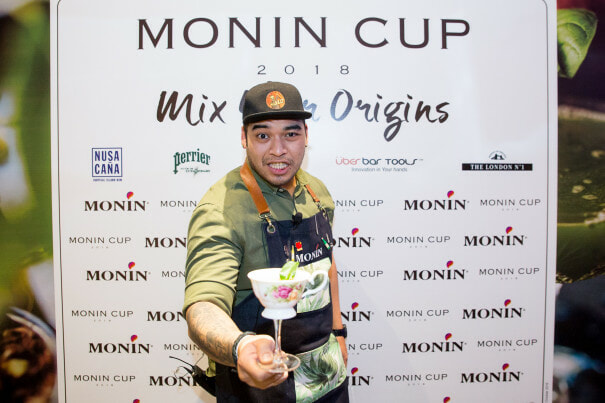 Dino got into the food and beverage (F&B) industry seven years ago but he only found his passion for mixology when he started working at Suzie Wong, the popular speakeasy in Kuala Lumpur, two years ago. When he was there, he worked under Erik Fiza, a veteran bartender who had been in the industry for 20 years and was inspired by him. He was so passionate about mixology that he quit his previous job as an assistant manager to pursue this! 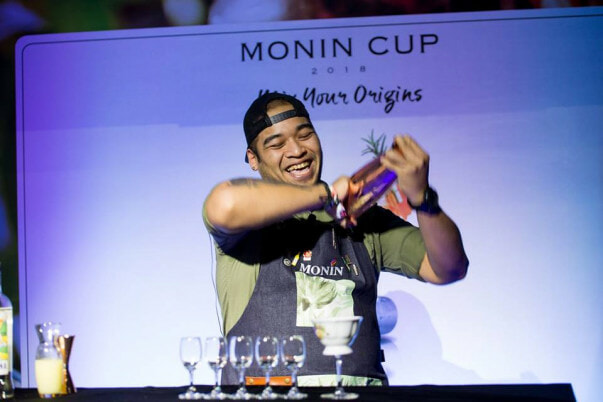 Dino had previously competed in the Malaysia Monin Cup 2018 and emerged as the first runner-up, which put him in the running for the APAC Monin Cup. That’s not all, this enthusiastic mixologist had also participated in three other competitions so we’re definitely expecting him to achieve even greater things in the future!

The inspiration for his winning cocktails 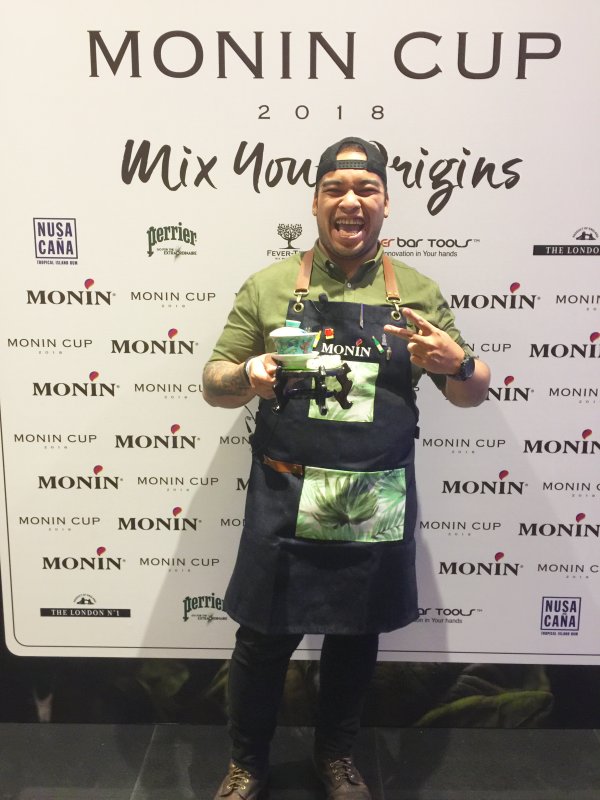 Dino posing with his cocktail, kiss me later | source: wob

Since the theme of this year’s Monin Cup is “Mix your origins”, Dino focused on using the King of Fruits, durian as his theme and created the “Kiss Me Later” concoction, which was inspired by his wife who loves durians and matcha lattes. The drink uses durian liquor, Le Frappe de Monin Matcha, Monin Caramel Syrup and Monin Popcorn Syrup to balance out the durian’s strong flavour. He told us that every time his wife eats durian, she would try to kiss him but he would tell her “later” as he does not like the smell. Aww, so cute!

He added, “I wanted to make a durian cocktail that everyone can accept because not everyone likes the pungent fruit. But for my creation, everyone would like it even if had a strong durian taste like the D24 or Musang King. When I served it to both durian lovers and haters, both groups told me that they like the drink although the durian taste was strong as the cocktail was well-balanced.” 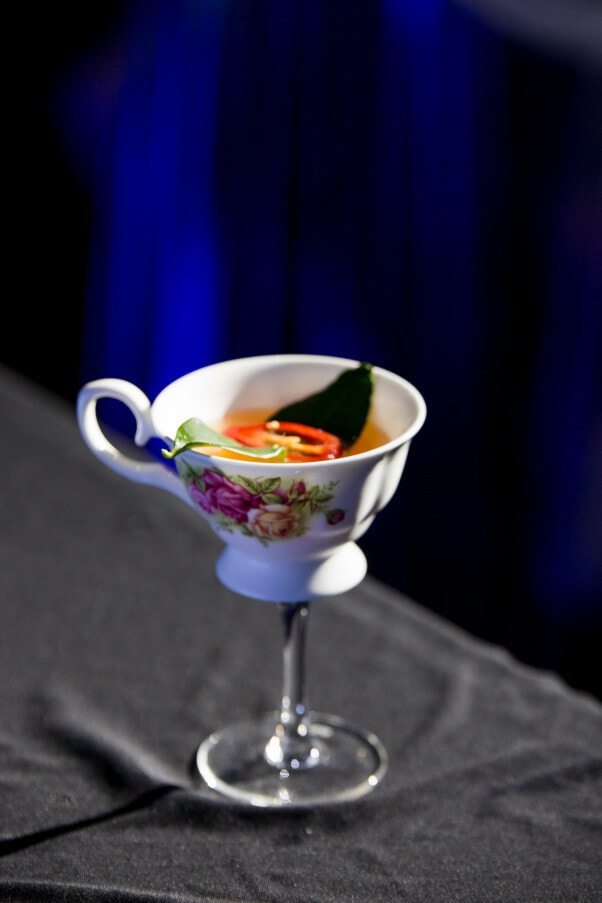 Dino was later shortlisted to be the top six finalists during the APAC Monin Cup and had to go through the black box challenge. Here, the finalists had to choose ingredients from the black box to make their drink and the concoction that Dino created was named the “Mangga Pedas” (which translates to spicy mango) comprising Monin Spicy Mango Syrup and even includes chopped red chillies inside. Sounds yummy! 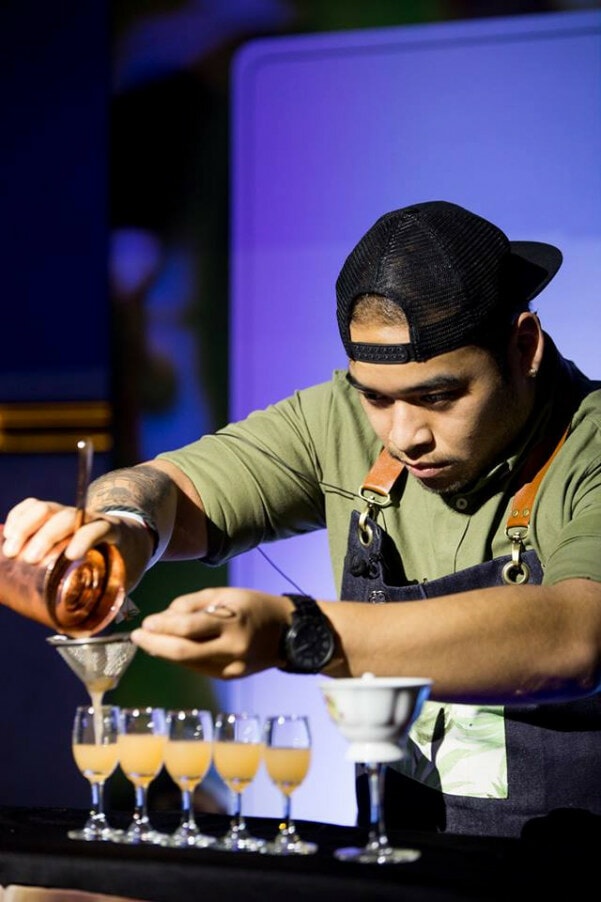 Being able to pursue your passion is something that we all dream about but sometimes, it just isn’t that easy! Especially if it doesn’t really pay the bills! So, we asked him for some advice for those of you who want to follow in Dino’s footsteps and he said, “Keep on trying and don’t give up! Throughout my journey, I made many mistakes but I learnt from it because it was all part of the process. Through trial and error, I managed to perfect my technique but I’m still learning constantly.”

He also said that working in the F&B line provided good experience as one can learn many things such as service, how to talk to customers and learning about the different types of drinks. “Probably one of the biggest struggles I faced was trying to make a drink that satisfied my customer’s taste buds. I talked to them and got to know what they liked and disliked as everyone has different tastes.” 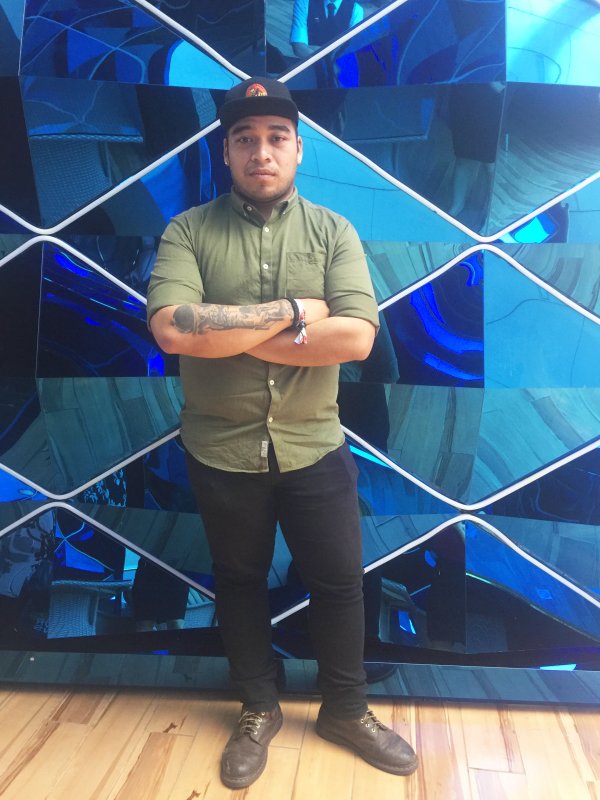 Ultimately, he said that one should always fight for their dreams and keep chasing their passion even if there are haters who try to weigh you down.

Congrats on your win, Dino! Good luck in the International Monin Cup 2018! 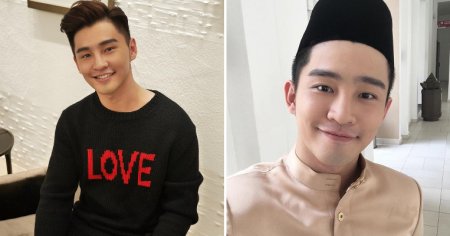