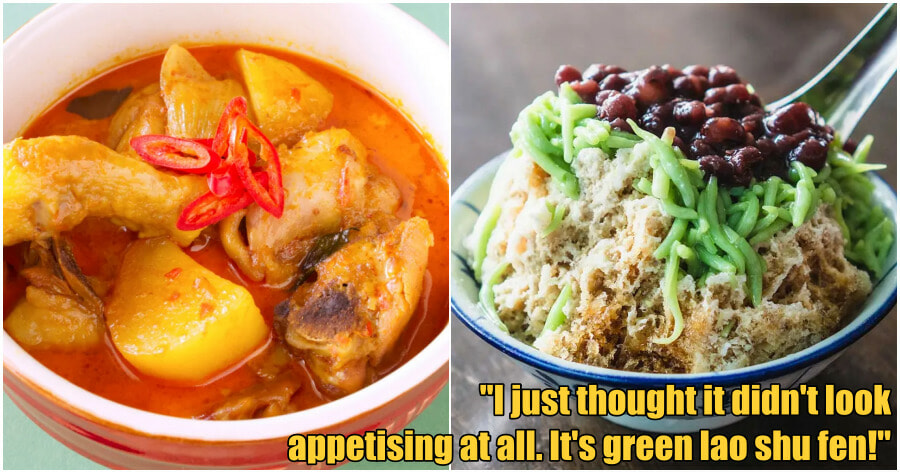 Growing up in Malaysia, most of us probably never even thought about how our beloved foods can be confusing or unusual, which is completely fair because they’re what we grew up with. They’re what we have always known.

Most of the time, it is only when we talk to our non-Malaysian friends that we realise that something as simple as teh can actually be super confusing to them!

As a result, ordering food at the mamak or in food courts can be a real struggle. 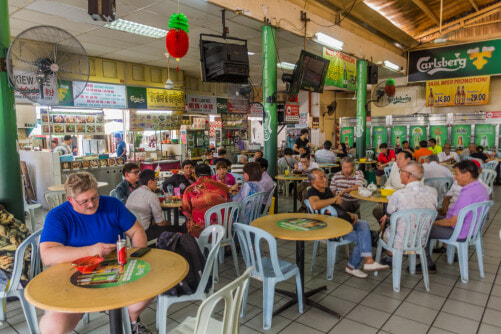 In an exclusive interview with WORLD OF BUZZ, Hung, a Taiwanese who recently completed her bachelor’s degree here, shared some of the things about her favourite Malaysian foods that she struggled to understand and eventually learnt too late.

Rendang and curry. It is no question. Any Malaysian would know that both are completely different dishes, but arguably equally amazing ones. 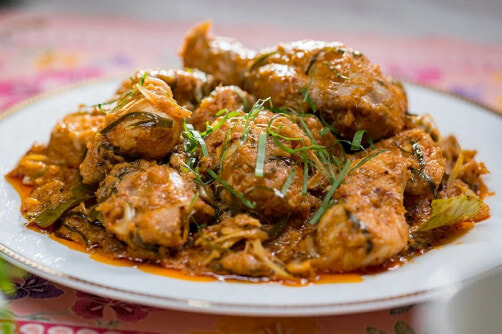 But they look similar, so it is totally understandable for someone who is less knowledgeable about Malaysian food to think of them as the same thing, especially if they are not familiar with the Malay language, which was what Hung struggled with.

Every time she made her way to her school cafeteria to have the mouth-watering rendang chicken, she would end up disappointed and confused as to why the stall operators didn’t give her the rendang chicken she wanted. 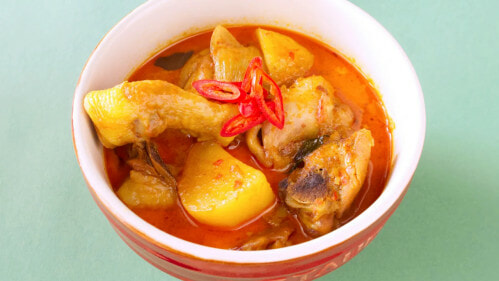 It was only during her last month ever in Malaysia after studying here for three or so years that she realised that she had got it all wrong. All this while, she thought that rendang and curry were the same thing!

“I would point at the rendang and say ‘curry’ and they would give me the curry instead of the rendang I pointed at!” she said while laughing. 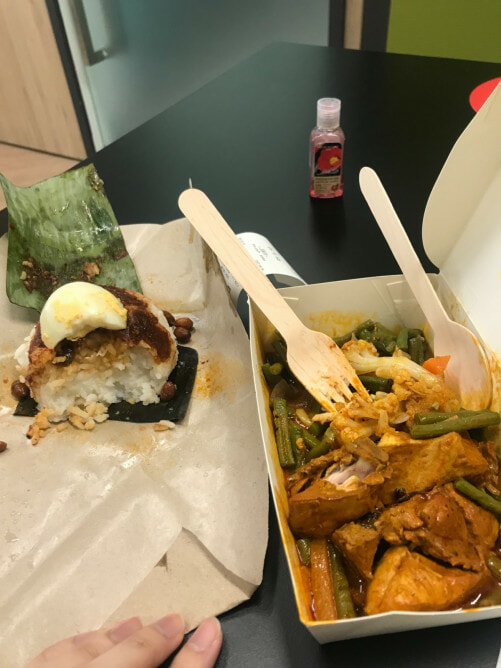 Real life photo evidence of the chicken curry hung had.

Well, at least now she can have rendang chicken to her heart’s content before leaving.

Apart from spicy chicken dishes, Hung also loved her Malaysian beverages, which is unfortunate because she also only learnt the names of the different tehs on Merdeka day of her last year here.

It was a busy day at the Ali, Muthu & Ah Hock restaurant at Dang Wangi when Hung had her first epiphany about Malaysian teh. 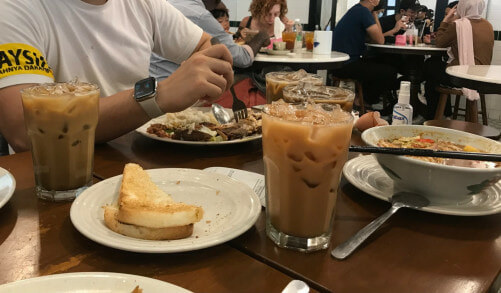 The different tehs hung and her friends ordered at ali, muthu & ah hock.

She was browsing through the list of tehs – teh tarik, teh o, teh c, teh ais – on the restaurant’s menu when she said to her friends, “Oh, I didn’t know there were so many different kinds of tea.” Epiphany number one.

After getting an expert rundown on the difference between each teh, Hung ordered a drink, hoping that it’ll taste like the one she previously had but didn’t know the name of. It didn’t taste the same. 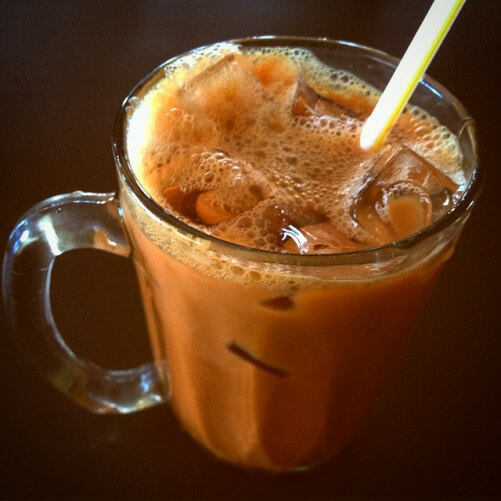 A few months later, Hung had her second epiphany. Taking a sip of the massive cup of teh ais she had ordered from a warong, she exclaimed, “This is the one I like!”

It looks like Hung will be having more of the brown liquid sugar now!

3. So many fried kuey teow

Another thing about Malaysian food that Hung learnt through a mistake she made at a zi char restaurant is that there is more than one version of fried kuey teow or char kuey teow (CKT). Of course, most of us would know the difference between at least a few versions, like Penang CKT, wet CKT like Wat Tan Hor and the Moonlight kuey teow.

But to a non-native, the nuances may not be so clear.

Having loved the fried kuey teow she had in Ipoh earlier, Hung was looking forward to savouring the delicious dish again when she ordered a fried kuey teow dish to share with her friend in a zi char restaurant. 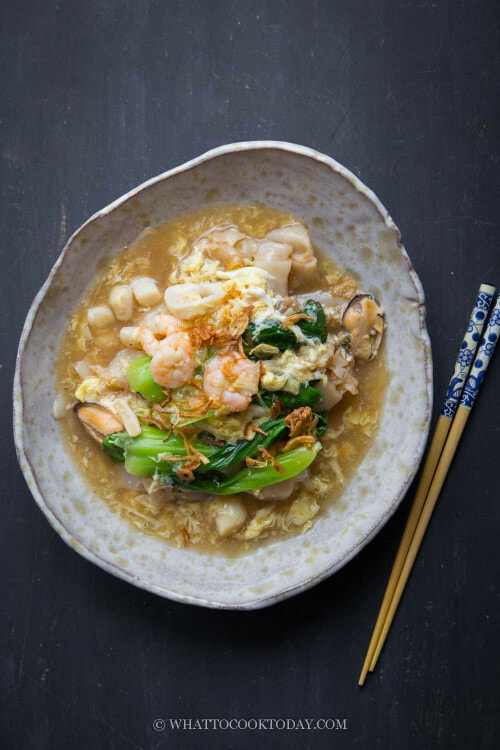 However, to her surprise, the fried kuey teow that arrived did not look like the one she had at all. She had unknowingly ordered a wat tan hor instead of the Moonlight Kuey Teow she enjoyed so much.

“I thought we ordered fried kuey teow, but the dish that was served was light in colour and wet!” she told WORLD OF BUZZ.

Afterwards, she received another quick lesson from her friend on all the different versions of fried kuey teow in Malaysia including those served in warongs and mamaks.

The last Malaysian food that Hung discovered the truth about too late is the colourful and refreshing iced sweet dessert, cendol.

Although having a sweet tooth, Hung was always hesitant to try cendol because she thought that the bright green jelly in it was lao shu fen or rat noodle, a variety of Chinese noodles.

This assumption was an immediate turn off as she was not a fan of the noodles, typically used in noodle dishes but occasionally used in desserts back in Taiwan. 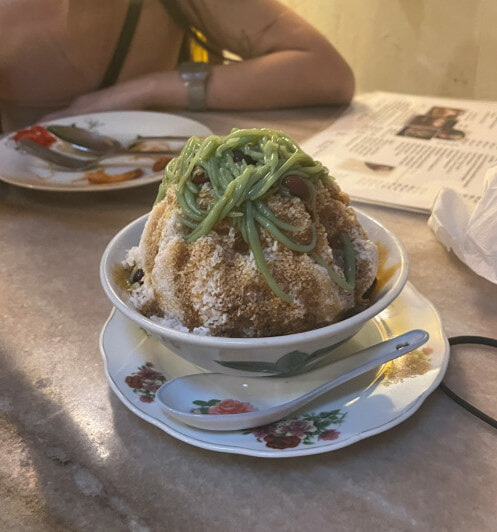 The cendol hung had in melaka.

It wasn’t until she took a short trip to Melaka that she found out about the truth and had a taste of the saccharine delight that could put some twenty-plus ringgit bingsu to shame.

“I asked her if it was lao shu fen and her face changed as if she couldn’t believe what I just said,” Hung described.

Then, her friend told her that it is actually just rice flour jelly with green colouring, which convinced Hung to try the dessert and it is safe to say that her life has never been the same since.

Are there any Malaysian foods you’ve confused before?