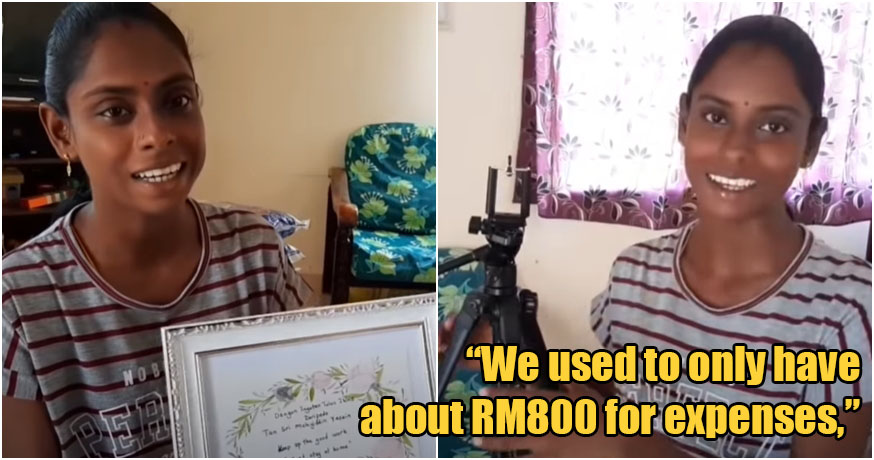 At this point, just about everyone who has been on social media in the past month will probably have come across the incredible story behind the Malaysian cooking sensation Sugu Pavithra, which was started by housewife Sugu Pavithra with the goal of sharing her simple yet delicious local recipes to the world.

Since her story broke cover just over two weeks ago, she has since become a social media star, gaining immense recognition for her achievements by Malaysians everywhere. Our Prime Minister has even gone to the extent of gifting her with more ingredients and tools for her trade, such as a tripod, a microwave oven, and a rice cooker to help her out on her endeavours!

Her husband only earns RM1,000

While we may all know her now for her humility and great recipes, the road to success for S. Pavithra and her husband, M. Sugu, did not come easily. In fact, when she first started her YouTube channel, part of it was due to her desire to help our her husband with their family’s expenses, as her husband was only paid around RM1,000 monthly in wages.

After deducting their commitments, their expendable income would only come in at a paltry RM800.

“When I first started, I just wanted to help out my husband, who works in an estate,”

On top of that, in her interview with BERNAMA, it was revealed that Pavithra started her cooking channel with only the most basic of cooking equipment that was available to her at home, which included a single wok, a handy spatula, a rice cooker, and two cooking pots. But in just four days of starting her cooking channel, she gained 5,000 subscribers and was offered to join YouTube as a partner! Woah!

Since then, the momentum has only gathered for Sugu Pavithra, with the channel now having grown from 116,000 subscribers to a whopping 534,000 subscribers as of today (18th May 2020)!

And through their filming endeavors, Pavithra has managed to collect a staggering USD 2,000 (RM8,700) paycheck last month too. Wow!

Now a bona-fide name in local social media, Pavithra adds that she plans to cook up a feast and distribute it to the workers who work at the same estate as her husband come this Hari Raya Aidilfitri. She also reminds her viewers that all dreams can come true, as long as one is willing to put the effort in to achieving them.

We wish the couple all the best on their road ahead, and hope to see more incredible content on Sugu Pavithra!