A male student was reported to have taken his own life after he could not answer his Additional Mathematics Paper 1 during the Sijil Pelajaran Menengah (SPM) examination.

The boy was a student from a secondary in Kuala Lumpur, SMK Raja Abdullah. Names were not mentioned by it is said that the boy was a young actor that starred in local Chinese language TV dramas.

The 17 year old was found by his parents in his bedroom with a necktie around clung tightly around his neck after his teacher reported him absent for his Add Maths Paper 2 that very afternoon. 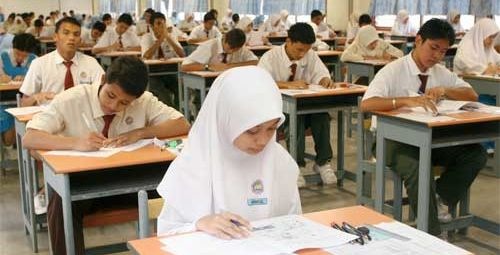 News Straits Times mentioned that the boy’s frustration of not being able to answer the questions is believe to have led to his own death.

Teachers described him as a bright student, but after the Add Maths Paper 1, he told his teachers he couldn’t solve the questions.

“He said he wanted to go home but the teacher advised him to stay. He didn’t listen and went home anyway,” said Sukri.

When he didn’t show up for his second Add Maths paper, concerned teachers contacted his parents asking about his whereabouts.

Not long after, they discovered his body in his bedroom in Taman Jinjang with a necktie tied to a window frame.

Authorities have ruled out foul play and the body was sent to Kuala Lumpur Hospital.

Student suicides in Malaysia are increasing over the years. Just last week, a university student from Sunway college committed suicide by jumping off the campus’ building on the forth floor.

The growing numbers may indicate the high pressures students are shouldering due to great expectations and standards society has on a person. Additionally, the increasing pressure families have over their children to do well in school as it’s common to think that good grades constituted to a bright future and good career.

It was noted in a previous study that Chinese topped the list in Malaysia for highest case of suicides.

Buying your very first property can be daunting as it’s probably the most important purchase you’ll make in your life!...

As Raya is steadily approaching, it’s no surprise that most Malaysians (especially those celebrating) are feeling a little down due...

Cadbury Reveals How You Should Keep Your Chocolate & Netizens Are Shook!

Everyone is SHOOK After Hearing How MasterChef Pronounces “Maggi”

WORK FROM HOME: Painting with Hana