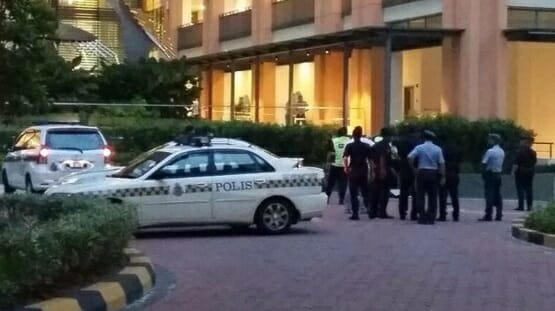 12 November – A student jumped off their campus building in Bandar Sunway in a suicide attempt and succeeded.

Some people on social media went into a frenzy wondering whether if the story was true or hoax. However, Sunway College’s office facbook page has confirmed on the incident. The university college released a short statement on the tragedy, confirming the death of a female student who fell to her death.

Currently the reason for her suicide still remains a mystery. Additionally, the Sunway post mentions that the authorities are currently conducting investigations and further statements will be released when more information is obtained. 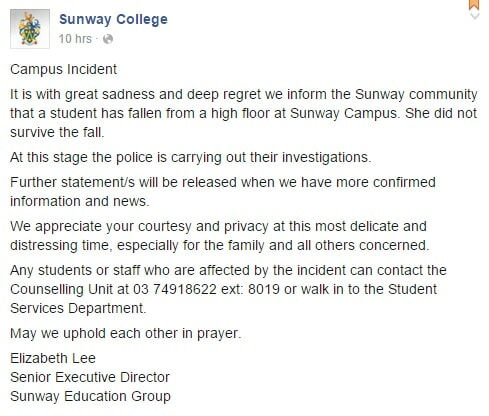 A student, Saadh who happened to have witness the scene was on the third floor when he saw an object falling in front of his eyes.

” By the looks of it, she was prepared, having put on black clothing and footwear […] And she never uttered a sound when falling, so you can imagine the dreadful state of mind she was in, being overwhelmed with unbearable emotional pain from the inner world and the need to escape the pain is the only driver of behaviour. It was chilling seeing her fall WITHOUT moving at all, motionless.” he writes.

The student further commented on the disrespectful act of students who started surrounding the corpse to take pictures of the body for social media posts.

Student suicides in Malaysia are on the rise over the years. Just last August, a university student from Taylor’s committed suicide by also jumping off the campus’ building.

Reasons for the suicide could be due to the higher expectation and standards society has on a person. Additionally, the increasing pressure families have over their children to do well in school as it’s common to think that good grades constituted to a bright future and good career.

It was noted in a previous study that Chinese topped the list in Malaysia for highest case of suicides. 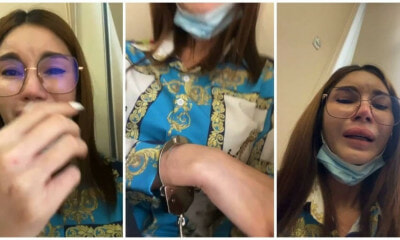