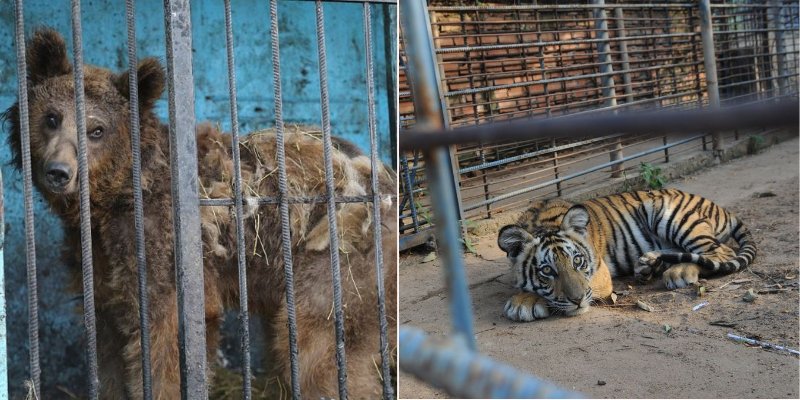 A couple of weeks ago, there were a few postings circulating through social media regarding how Singapore was making an appeal to suspend zoo culture.

Here’s one of the postings: 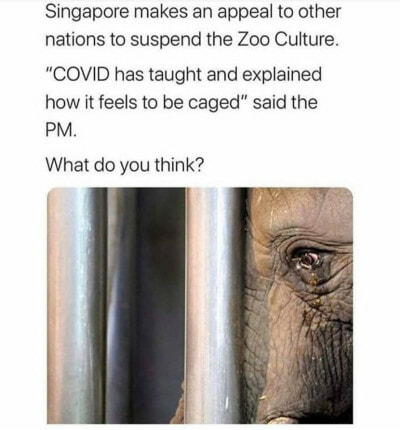 The posting added an apparent statement by the Singaporean prime minister, Lee Hsien Loong, which read, “Covid-19 has taught and explained how it feels to be caged”.

These postings were later exposed to be falsified for social media. And that made me sad.

Let me tell you why.

I believe that zoos are basically jails except for the fact that jails are meant to contain people who have committed crimes. Animals in zoo committed no crimes but yet they live their lives behind bars, for the human gaze and entertainment.

The false postings insinuated that we should abolish zoo culture because the Covid-19 virus forced us to stay within the confinements of our own home, and this compels us to consider how animals living in zoos have felt all their lives (and are still feeling) especially given that they also have people staring at them and taking pictures from the other side of the bars or glass panels. 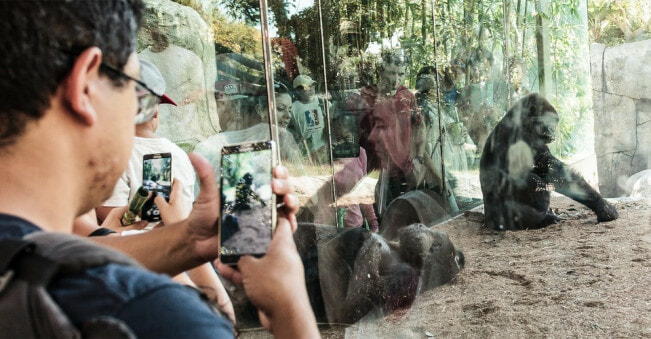 Some people also believe that most animals do not have a sense of imprisonment or freedom. Others on the other hand, fear for the safety of animals out in the wild due to poaching and hunting.

Though, it’s hard to comprehend that animals don’t at least share similar emotional traits as humans when you see animals suffering from zoochosis (yes, it’s a real thing).

Zoochosis is the term used to describe an animal’s mental behavior in captivity. This often times involves animals engaging in invariant, repetitive patterns with no apparent goal.

One example of this is the caged white tiger in China that walked in a non-stop circle that it etched a deep track in the ground.

An animal experiencing zoochosis would pace and walk in circles aimlessly.

By the way, this ^ apparently happened at Zoo Melaka.

According to BornFree, zoochosis can be triggered by various factors ranging from:

Space – cramped or very limited amount of room to wander and roam.
Social interactions – the interplay of an animal between its own species and others (including prey and predators).
Diet – the proper nutrition needed to prevent unwanted diseases and ailments that otherwise may not be a problem experienced by the species in their natural habitats.
Climate – the animal’s lack of choice towards an environment.
Presence of humans – the desensitisation of animals to human presence (and general lack of privacy). 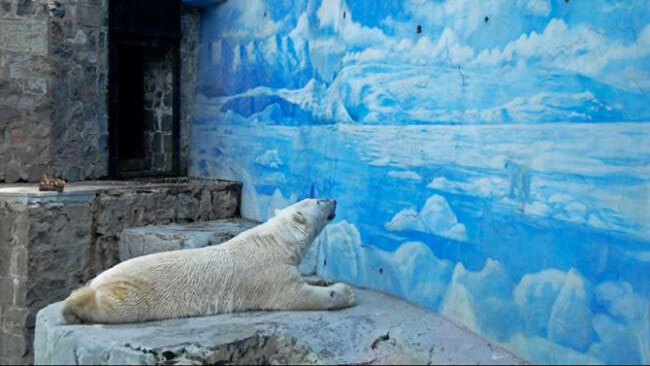 Other signs of zoochosis involve…

It’s safe to say that animals kept in zoos could potentially drive them nuts!

And if we were treated that way, we’d probably go nuts too.

Animals have evolved over millennia and their physical, physiological and behavioural traits are specifically adapted to their natural habitat, not zoos. 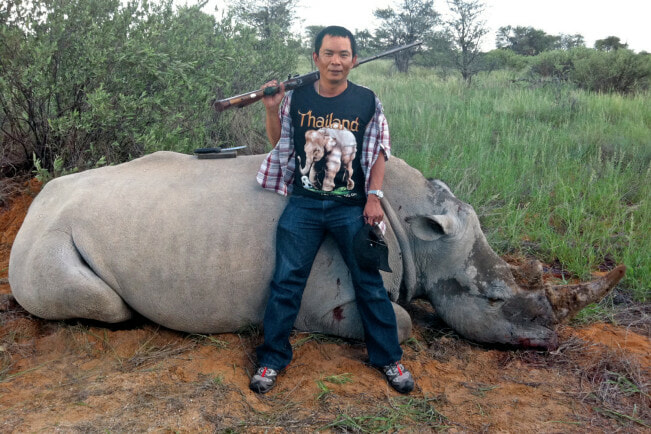 It is understandable to be fearful for these animals lives when they are in the wild due to poaching and hunting, but that’s why we need more extensive criminal punishments, laws and investigations into such activities as well as for wildlife trading and black markets. 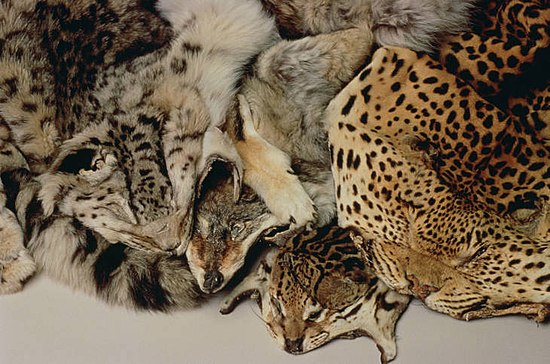 Zoos should be abolished for the sake of these animals’ well-being.

Instead, animal sanctuaries and reserves should be uplifted and more widely celebrated by the general public compared to zoos and at least at sanctuaries, the animals have the ability to roam freely in large spaces and live in groups instead of in isolation. 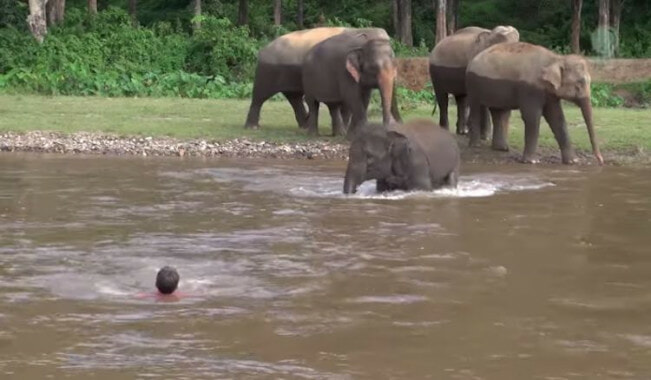 Sanctuaries also protect wild animals that are no longer capable of taking care of themselves outside of captivity as they’ve lost their ability to hunt for food or are more vulnerable than others to predators due to injuries or because of the effects of zoochosis.

But if they have healed from their wounds and are more than capable of fending for themselves, they deserve to be free. 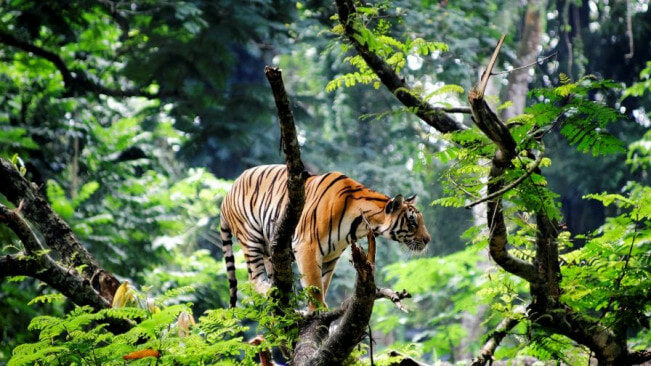 After all, zoos are also no longer doing well as they’ve significantly lost visitors over the years and are struggling to feed their animals who should be well taken care of.

Hence, why not close down zoos, send the animals to sanctuaries where they can rehabilitate in the efforts of placing them back into the wild? Instead of showing support for zoos for the sake of seeing animals, show support for sanctuaries who are capable of ethically caring for these animals and still actually visit the animals as sanctuaries allow visitors too.

We’d basically be trading this… 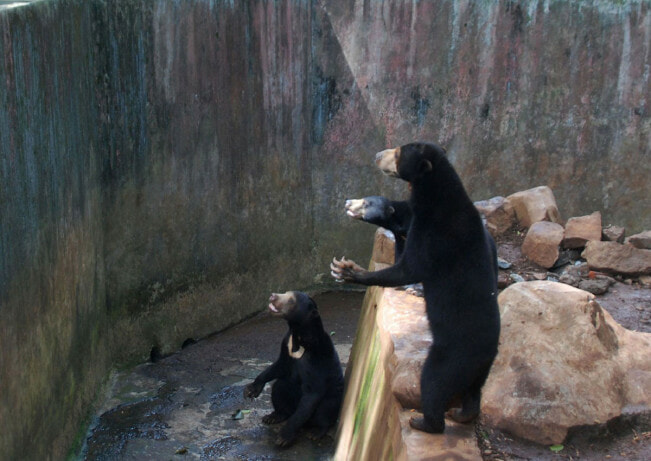 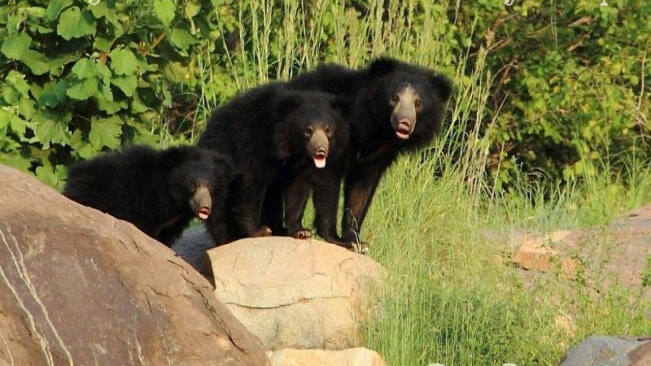 Doesn’t seem like so bad of a change or investment, right?

With that being said, I believe it’s about time we abolish zoo culture for good.

Don’t become captivated by captivity. There is no beauty in stolen freedom.