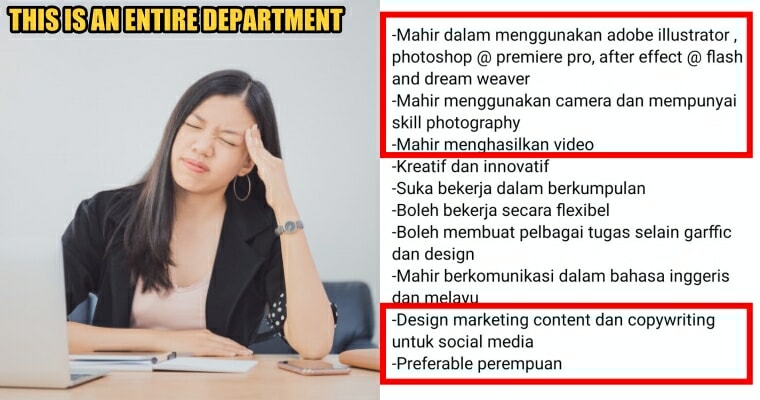 It’s not easy to land ourselves a job these days, especially when the cost of living has been increasing, but salaries remain unchanged for most fields. It’s also a common phenomenon when companies are cutting costs by hiring skilled individuals who can perform various tasks but are only paying them peanuts.

A job vacancy surfaced on the internet two days ago (19 December) and many netizens were shocked to find out that a company from Sri Damansara is paying only RM1,800 (maximum) for a Graphic Designer.

Now, we shouldn’t jump to the conclusion so quickly by judging that RM1,800 is far too little for a designer. But let’s take a look at the job scope that was posted on Facebook. 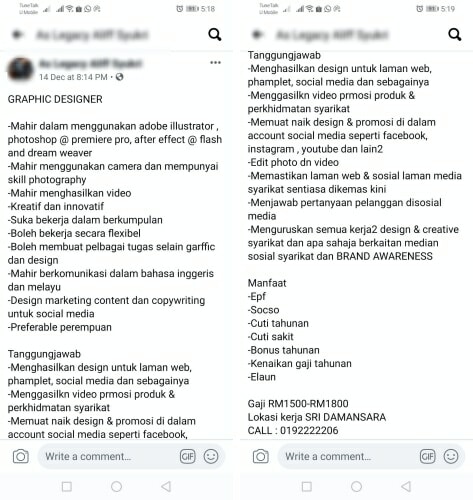 According to the vacancy, the graphic designer would need to be skilled in using Adobe Illustrator, Photoshop, Premiere Pro, After Effect, and Dream Weaver. OK, sounds pretty legit for a designer’s job scope. But! The company also requires the designer to be skilled in photography, video production, marketing content AND copywriting. WHOA.

That is still not all, the new employee will also need to keep their website and social media profiles neat and tidy “at all times”, and respond to customers’ inquiries on social media, on top of the gigantic list of job scopes of a graphic designer.

To put it in simpler words, this company intends to hire ONE person to do the job of (at least) THREE people. And to make it worse, the salary will only be between RM1,500 to RM1,800.

The long list of requirements ended with “Preferable perempuan“.

Netizens on Twitterjaya were angered when they came across this vacancy, and they commented on how absurd the requirements are.

“Why would a graphic designer be required to manage social media?”, Ahmad then listed the job positions that are NEEDED to perform all the tasks that were listed.

“What this company needs is an entire department, not one graphic designer.”

“There’re two pages of requirements but for a salary like that, might as well work at a speedmart.”

The response to this tweet was epic: “Speedmart would pay RM2,000 if you’re a degree holder.”

Yikes! This job vacancy sounds crazy to us. What do you think?

Also read: “The manager may touch you here and there” – M’sian Reveals How She was Offered Secretary Job 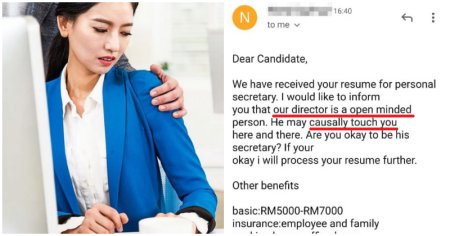