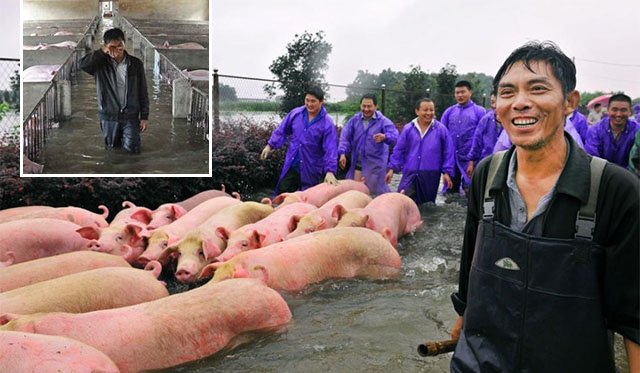 Earlier, the Internet was moved by the reports of thousands of poor pigs stranded inside a farm in China due to rising floodwaters along with their teary-eyed farmer who had to bid them farewell. However, just in the nick of time, help came in the form of a company who decided to help, saving 1000 pigs from their drowned fate.. However, there’s a twist. No Dobby, not today. You will never be free.

People’s Daily reports that only 1,000 of the lot were mature enough to be slaughtered, so they were the ones who were picked out to be “saved”. Originally, there was said to be around 6,000 poor pigs. The number was later corrected to 3,000 by the farm.

A rescue team under operation “Save the Bacon” was impeded by meter-deep floodwaters, thus the pigs had to be rescued one-by-one.

The Xishang Group, the company heading the rescue, said that the operation was quite expensive. Lu Weishi, the company director, told The Paper, “Financially, this is actually a loss for us. But social responsibilities are more important.”

Zhou Jun, vice general manager of Xishang Group, said that most of pigs looked healthy, though some of them were still piglets. Zhou added that the slaughtering was set to begin that evening.

It seems like the pigs just had their watery fate swapped for a butcher house. Just look at their naive little faces 🙁

Oh, the irony of the above picture. The farmer is happy because all his bacon is saved. The pigs are happy because they think they were saved from death. What a cruel world.