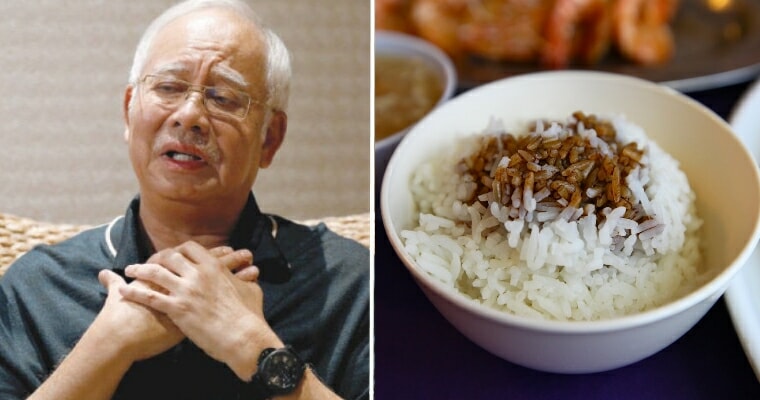 Remember how as students most of us would find the cheapest meals possible? Eating economy rice and Maggi and other variations of easy and cheap meals just to get through those assignment-filled days?

Yesterday, Berita Harian posted an exclusive detailing the plights of cash-strapped students in the University of Malaya (UM), describing how some students only eat once a day, while others fast regularly. Some students even depended only on a loaf of bread for two days.

If you found that to be sad, you may be like most people. If you have also been accused of embezzling millions from the country, you could also be Najib .

The ex-prime minister took to Facebook to voice his opinion on the article, lambasting the current Pakatan Harapan administration and citing their misuse of the country’s funds. 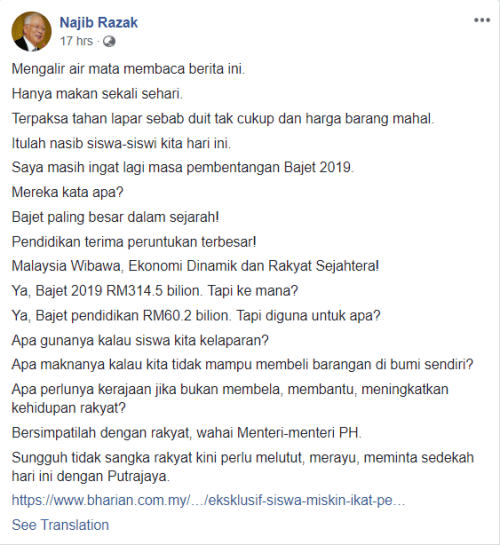 “I am tearing up just reading this news.
Only eating once a day, forced to go hungry because they don’t have enough money and the price of goods is high.
That’s the fate of our students today.”

“I still remember during the presentation of Budget 2019.
What were they saying? The biggest budget in history!
The education sector will get the biggest share!
Malaysia is a credible, dynamic economy and the people will prosper!
Yes, Budget 2019 had RM314.5 billion. But where is it?
Yes, the budget for the education sector had RM60.2 billion. But what is the money used for?
What’s the use if our students are starving?
What’s the meaning (of the Budget 2019) if we can’t afford to buy things in our own land?
What is the use of the government if not to defend, help, and improve the life of the people?
Please sympathise with the people, Ministers of PH.
I can’t believe that citizens need to kneel and beg so that they can ask for some charity from Putrajaya.” 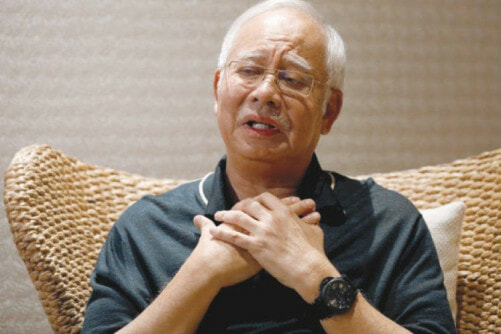 The irony of an accused kleptocrat criticising the government for misusing money wasn’t lost on netizens, and Najib was shown no mercy in the comments. Here are just some of the comments they posted on his status:

“Yes! Back in the time of Najib all students lived luxuriously, driving Ferraris and eating lobster.”

“Oh, you’ve just noticed? It’s been like this since your time, but you were blind to it. Only now when you’re the opposition then you see the hardship of the people. That’s why you fell from power.”

“Excuse me? 10 years ago, during my time we were starving. Life was hard for my parents also. Don’t blame PH for your political purposes. We are all hoping for a better nation and a better future. If you haven’t contributed to the country, please be quiet.”

“It’s been ongoing for a long time since your leadership. How rich coming from someone that eats quinoa.”

“You’re tearing up? You stole the people’s money, bought handbags and rings and now the students have to starve.”

Some netizens have also shared their experiences and how it’s quite normal for students to live thriftily, whilst others blamed poor financial management coupled with their spending on modern “needs”.

“Some of these kids take their PTPTN money to buy motorcycles and handphones, I saw many of them when I was studying. Their financial attitudes are the problem, not the money.”

“It was the same for me back in the old days. Economy rice and maggi were a student’s favourite meal. They rather spend the money for expensive phones, sneakers, and online shopping.”

“I remember when I was studying I would eat rice and anchovies. It’s not merely hardship, but rather a challenge to learn and succeed.”

“It’s normal. A student has no job, without work there’s no money. Let it be a bit difficult right now. If they never taste hardship, they have no self-awareness.”

With over 1,300 shares and 1,800 comments at the time of this writing, the conversation rages on. You can see the post for yourself and join in the discussion here.

What do you guys think about Najib’s statement? Let us know your thoughts in the comments!

Also read: Najib Goes to Toilet Without Informing Court, Judge Pauses Proceedings to Look For Him