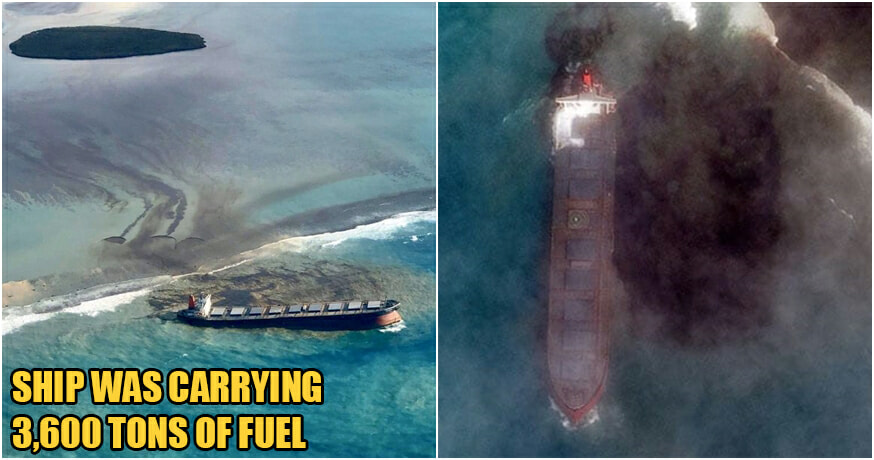 The island nation of Mauritius has officially declared a state of environmental emergency after a Japanese-owned ship ferrying over 3,600 tons of fuel that ran ashore started leaking its contents into their oceans. Prime Minister of Mauritius Pravind Jugnauth made the announcement on Friday (7th August 2020) after the fuel began spreading into parts of the ocean that have been described as being ‘very sensitive’, reports SBS News.

The ship, the MV Wakashio, was found on the shores of Pointe d’Esny, on the eastern part of Mauritius, sometime during the end of July. However, the fuel leak had only started recently after the hull of the ship started showing signs of cracks before dark slick began tainting the nation’s famously clear, crystalline waters.

Mr Jugnauth has since made an appeal to French President Emannuel Marcon for help, citing the fact that the small nation does not have the necessary resources to cull the escalating situation at hand.

“Our country does not have the skills and expertise to refloat stranded ships.” he wrote in his Twitter post addressed to the French President.

It is feared that an oil leak of such a massive scale could cause lasting impacts to the nation’s environment. Happy Khambule, Greenpeace Africa senior climate and energy campaign manager has pointed out that marine life living in the affected regions may risk drowning in the thick oil, reports CNN. This is especially alarming as the leak is occurring over protected coral reefs in Mauritius.

Absolutely shattered by the ecological crisis faced by Mauritius. These pictures of the oil spill, wrecking our most beautiful lagoons, were taken by my friend Eric Villars on his flight to Rodrigues this morning. #mauritius #oilspill #wakashio #bluebay #coralreefs #marinepark pic.twitter.com/DRTLthCZw1

Oil spills such as this one have been known to leave lingering damage to the environment, with senior scientist on the global marine team for the Nature Conservancy, Mike Beck, stating that it could last anywhere between two to five years if not more.

Marcon has since responded to the crisis and pledged to deploy teams and equipment from the neighbouring French island of Reunion to Mauritius.