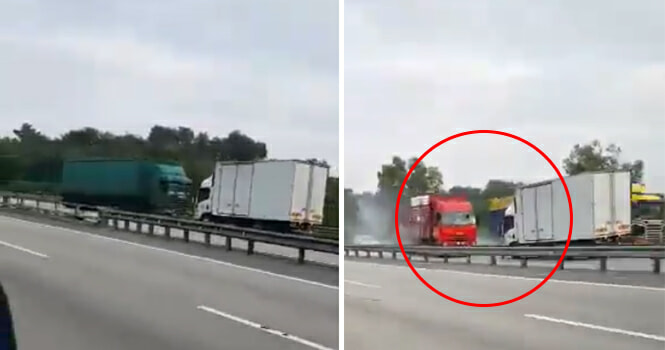 On Sunday (Oct 7), a lorry driver was caught on video driving against traffic on the North-South Expressway (NSE) at 9.15am for 3km after the Sungai Buaya toll before colliding with another lorry.

After investigating, Hulu Selangor district police chief Superintendent Lim Bak Pai said it was found that the 37-year-old man, who was a medicine supplier does not own a driving license on top of having a criminal record, 64 unpaid summonses, 36 arrest warrants against him and 15 cases that required him to be present in court. He was also once charged under Section 379 of the Penal Code for theft.

A 48-year-old man whose lorry collided with the suspect’s vehicle stated that he was driving from Ipoh to Kuala Lumpur when he saw the lorry moving towards him but his brakes failed on him, and therefore, he crashed into the suspect’s vehicle. Fortunately, no one was injured in the incident. Phew!

This asshole was driving in the middle lane facing oncoming traffic. What if he crashed head on (which he did) with innocent drivers and killed them? pic.twitter.com/YJ9TZUgC5H

“Urine test showed that he was negative for drugs but police also took the suspect to Kuala Kubu Hospital for a blood alcohol test. The sample will be sent to the Chemistry Department for a thorough examination,” he said in a statement today (8 October), according to The Star.

The case is being investigated under Section 42 (1) of the Road Transport Act 1987 for dangerous driving and section 366 of the Penal Code for executing an act that harms the life of others.

What do you guys think about this dangerous incident and the fact that someone with numerous road traffic offences – and sans a licence too – was allowed on the road, risking the lives of others? Tell us in the comments! 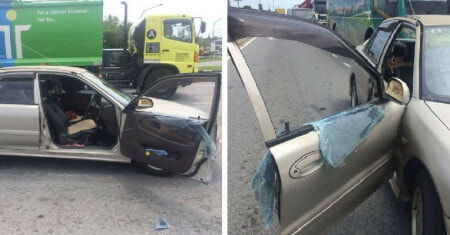