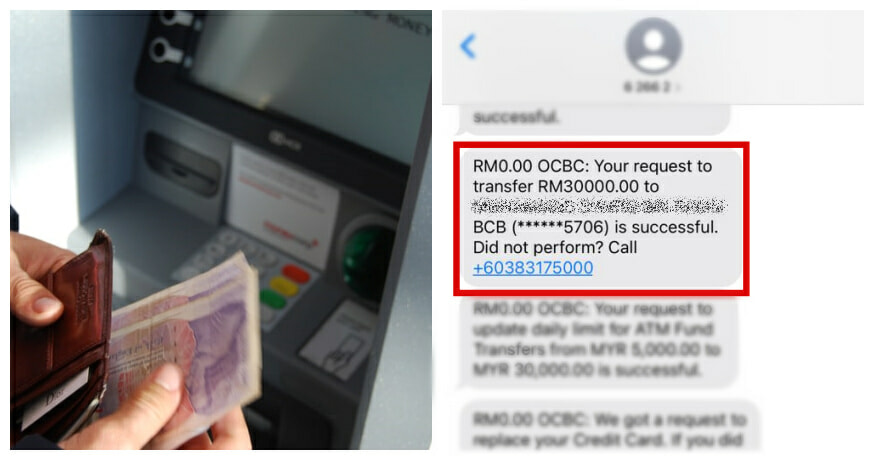 We often hear stories from victims of scam calls and hacked bank accounts, but what are the chances of you getting scammed by your very own bank?

Just yesterday, Jacqueson JL Cheok took to Facebook to share how he was hacked and scammed two weeks ago. On 28 October he received a call from AM Bank asking if he had made a payment on Lazada for the amount of RM3,633.53.

“I told them no and I don’t have this card. Please cancel it. They said okay and proceeded to provide me with my information such as full name, IC, home address and all I replied was “yes” as it’s all correct.”

“They then proceeded to say my card is cancelled and they have lodged a police report too. They even WhatsApp me the police report to my phone. The line was transferred to Bank Negara Malaysia to lodge for personal information leaked.”

He was then informed that this case would be brought to the high courts, before being directed to an officer called Inspector Tham Kok Khai who was said to be handling his case.

Throughout this ordeal, the person on the other line repeated various personal information of Jacqueson, including his Maybank and OCBC debit card numbers and a police report that he had lodged five years ago, to which he confirmed by saying “yes” to everything, without leaking any information on his own.

“Up until this point of time NO TAC SMS was sent to my phone. But I was receiving messages from both Maybank and OCBC bank in the same manner. I was shivering from head to toe, literally going through a panic attack and hyperventilating. All my life saving was flowing out of my account without my control.”

Jacqueson then immediately called both Maybank and OCBC Bank to figure out what was happening. Turns out, all his money was transferred out internally, meaning that the scammer had somehow managed to internally transfer all his money into his main account before instant transferring everything out.

Luckily for Jacqueson, Maybank was able to freeze all his accounts and the withdrawals, before returning all his money into his bank accounts two days later. But the same cannot be said for OCBC Bank.

“As for OCBC bank, when I got through the machine, the teller caller insisted multiple times whether I have shared my details or not. I kept saying No, No, NO! but still, she insisted the same question. Hence I replied, WILL YOU STOP THE TRANSACTION IF I SAY YES? THEN YES! STOP IT NOW! Only then she replied me, ‘We have stopped all transaction and frozen all your accounts however the first transaction of RM30k has crossed under instant transfer.'”

Two weeks later, he received a letter from OCBC Bank stating that because he had shared his internet banking credentials, OCBC Bank would be unable to recover the RM30K transferred out of his bank account. 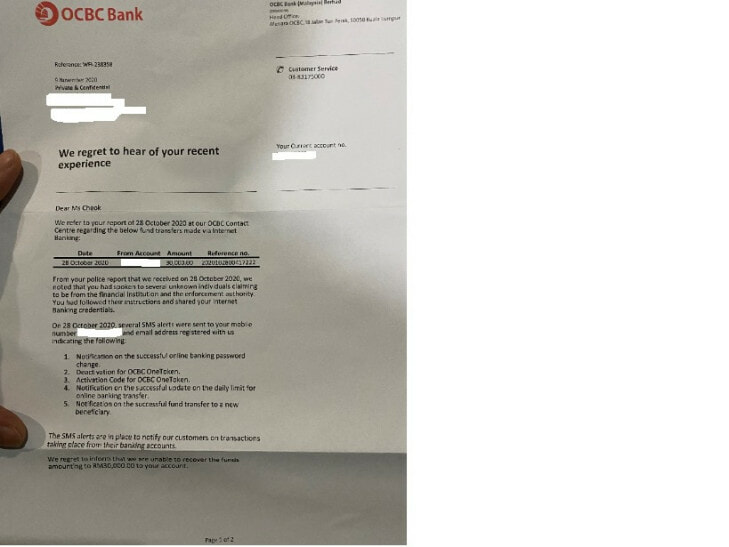 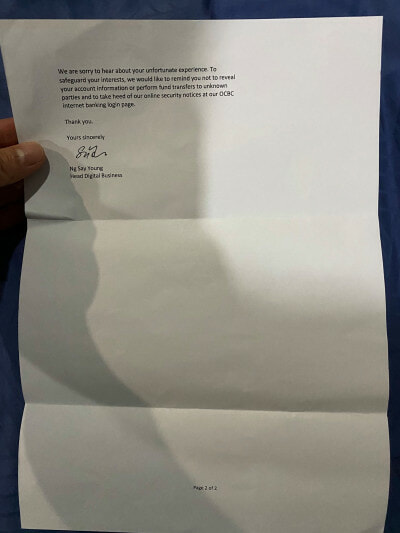 Needless to say, Jacuqueson was left feeling frustrated and distressed not only by the person who had hacked his bank account but by his bank as well.

“I am extremely disappointed and extremely distressed from this experience and worst of all, OCBC guaranteeing that my money that I place into their accounts is protected by PIDM. Well apparently, what is promised is not fulfil.”

“I just lost RM30k to a high-end scammer/hacker. At least Maybank had the guts to return me my money. OCBC your security is highly and extremely questionable.”

We hope somehow the bank will help Jacqueson and settle his problem. Always, always, ALWAYS remember, never share personal information over the phone or social media. If you are suspicious of a phone number of a bank account number, you can check it using the Semak Mule app here.

Also read: M’sians Beware: Scammers Are Posing As LHDNM To Get Your Personal Banking Information 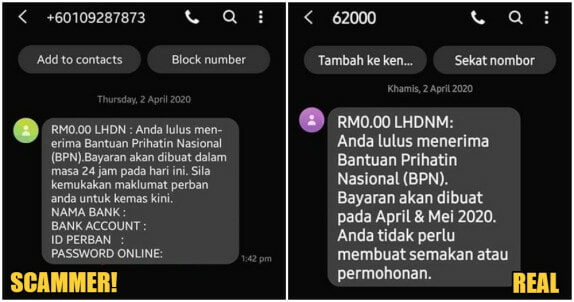