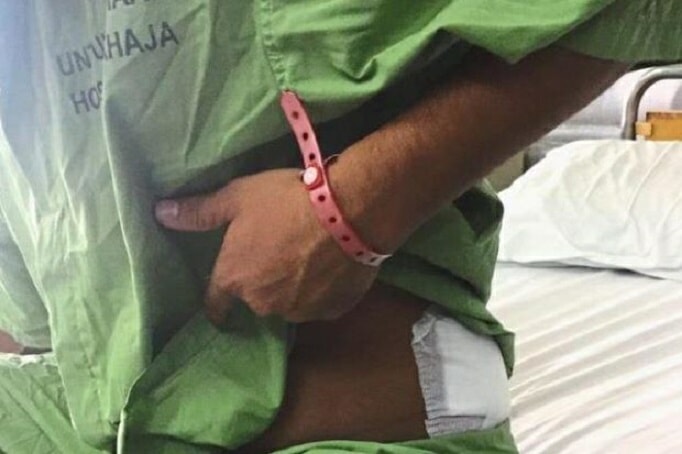 When most would have stood dumbfounded in shock upon seeing a gun, Tareem Islah Taraz performed an act of pure selflessness by rushing into the store of a petrol station when he saw a man pointing a gun at colleagues of his.

His first thought? The safety of his friends and the customers in the store despite knowing the risk of being shot.

“I tried to tackle him from behind but I was shot at while trying to do so.”

“The pain was excruciating but I knew I had to do something before my friends and customers were harmed.”

“I’m glad he’s been caught. I did what I thought was the right thing to do,” said the 23 year-old from his hospital bed at the Kuala Lumpur Hospital yesterday.

The scene unfolded when an armed man walked into a store at a petrol station in Jalan Genting Klang, Setapak, and demanded cash from the two workers stationed inside. Tareem witnessed it all from the petrol pump area, and immediately rushed inside the convenience store and ambushed the culprit from behind.

A scuffle ensued between Tareem and the culprit, and resulted in three shots being fired, including one that hit Tareem on the left side of his waist.

He is understandably a little traumatized by the incident: “I fear that they may come back for me. But my boss and friends have been very supportive. It’s not easy to find a good working environment with a good superior.”

But rest assured Tareem, for the 32 year-old unemployed man was arrested minutes after the scene with the help of passers-by said Wangsa Maju OCPD Supt Mohamad Roy Suhaimi Sarif.

He added that prior to the shooting, the gunman had grabbed a container containing RM350 after staff refused to oblige to his demands. Supt Mohamad Roy said the suspect claimed the gun was lent to him via a friend: “That led us to the arrest of another 32-year-old man near a 24-hour convenience shop in Setapak that same night.”