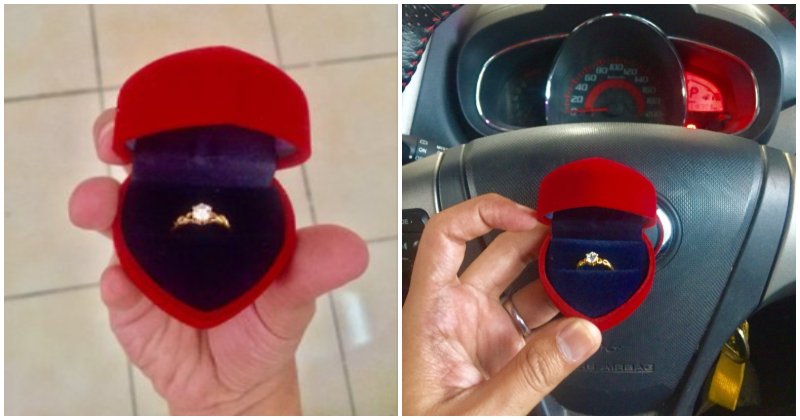 We were just saying how finding your true love or soulmate can be a rare occurrence, but in order to find ‘the one’, you’ll have to kiss a few toads.

A man from Kelantan thought that he found his significant other after dating her for 6 years, which led to him purchasing a pair of engagement rings with the idea of proposing to her. Little did he know that she was about to break his heart.

The man, Bangyeem (@Bangyeem), took to his Twitter to not only share his heartbreak, but also to offer the engagement rings FOR FREE to anyone lucky enough to receive them (we don’t actually know how he’s going to pick a person to give it to though), in a now-viral posting.

Bangyeem captioned his posting with, “So because I’m not getting engaged in October, as people said the marriage would not last, I’m giving away the engagement ring to anyone lucky enough.”

Based on the pictures in the posting, he has already given away one of the rings to his friend, which means another is still up for grabs, though it just doesn’t feel very honourable to just take someone else’s engagement ring, right?

So, netizens took to the comments to suggest ideas of what Bangyeem could do with the ring that doesn’t involve just giving it away.

This comment goes, “Just sell it back (to the store), keep the money for your future.”

This comment says, “Readjust the size and give it to your mother. Wouldn’t that be sweet?”

Bangyeem was also lucky enough to receive flirty engagement requests from the posting.

This comment reads, “Let’s just get engaged, the two of us.”

Upon further investigation, we found out the reason why Bangyeem’s proposal didn’t work out.

His posting has since garnered over 690 retweets.

We hope you find someone who’ll truly appreciate you, Bangyeem!