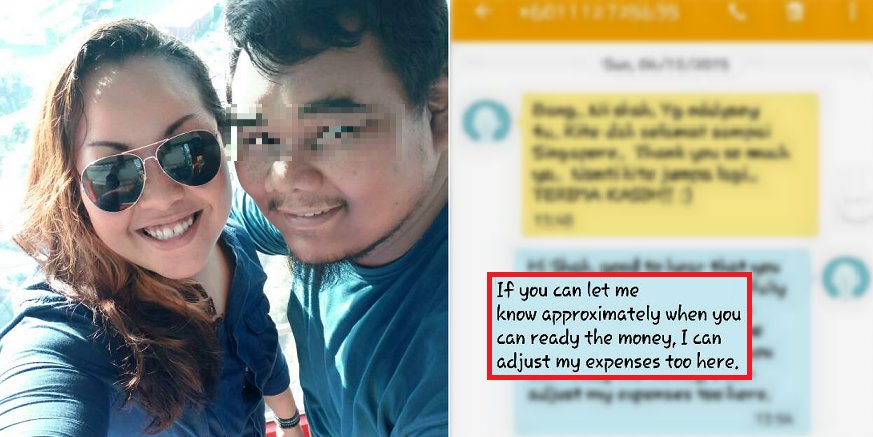 Malaysian Sharvin Kumar recently posted to Facebook to express his disappointment as he recalls the day he so kind-heartedly helped a couple who was stranded by the road.

Kumar who’s from Johor Bharu recalls how almost exactly last year, he saw a car parked by the road with its hood open and decided to help out.

“I saw a Honda Odyssey 2006 black or bronze not sure, registration number SGH 3105 L was parked by the roadside with the hood open near Petronas Jalan Bukit Chagar.

I stopped my car to help and I saw a Malay couple was in the car. The guy’s name was Mohd Sharel and the girl was Syazwani if I’m not mistaken.”

After speaking to them, the male stranger tells him that he works as a bouncer in Jurong, Singapore but their car broke down and are unable to return home.

“They said they just bought a new battery for the car but before going in SG, the car broke down. Even after trying to jump start several times.

“After several workshop guys came to see, they have mentioned to bring to workshop to diagnose the car.”

Kumar was nice to stay with the couple for over an hour, trying to come up with a way to help them on their way home. After seeking for help from mechanics, the couple finally decided on towing their car back to Singapore.

“He said he wants to tow the car back to SG since he bought this car from a used car dealer recently so they provide warranty but he has no money and no one is answering his call to help.

“I called a friend of mine who does towing services and asked the price to tow back to SG. It was RM750.”

The couple didn’t have any money and asked Kumar for help. But his good will was left betrayed.

“He asked if I could help him to pay first and then later after a week he will come back JB to pay me. Out of goodwill I paid but almost 1 year now and there’s no news.

“He is still using the same number, he answers but he acts as if he doesn’t know me.”

Kumar shares his story along with a picture of the couple urging people to be wary of the dishonest couple. 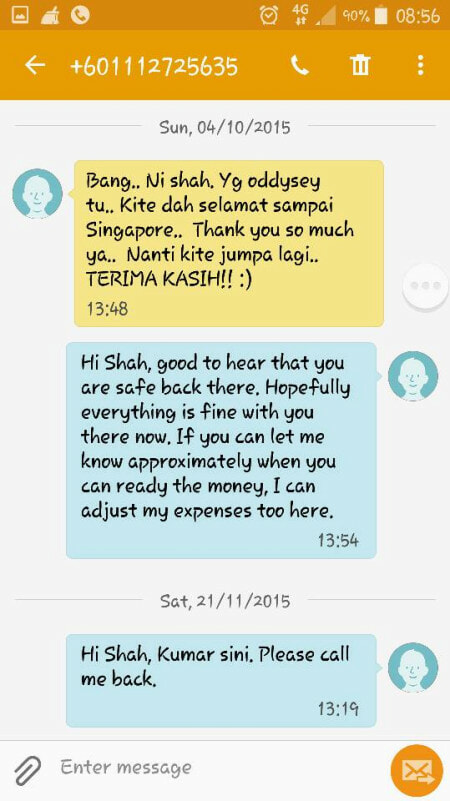 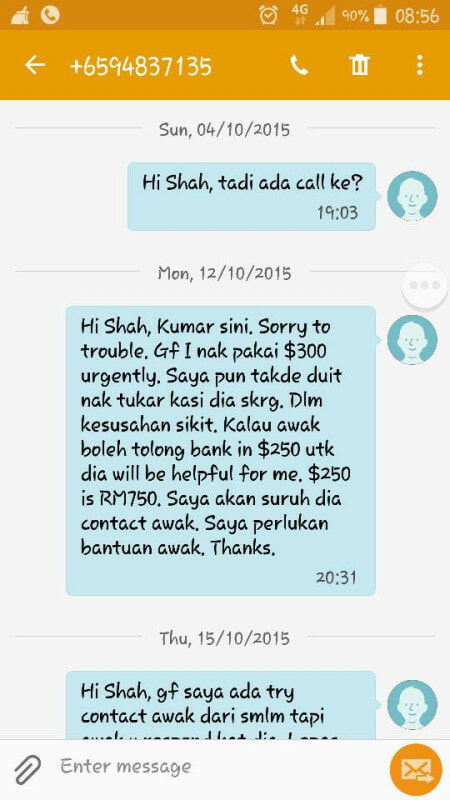 Netizens who read his story understandably shared their outrage for the couple who betrayed his trust.

“RM 750 is a very big sum to Malaysians. It is more than a half month pay for some of them over there. You two shouldn’t have done this kind of dishonorable thing to people. Shame on you.” one wrote.

“Disgusting…people there help u and u can totally ignore to return the favour..u shame the Singaporeans. If u still have some conscience please return the money…is his hard earned money..” another commented.