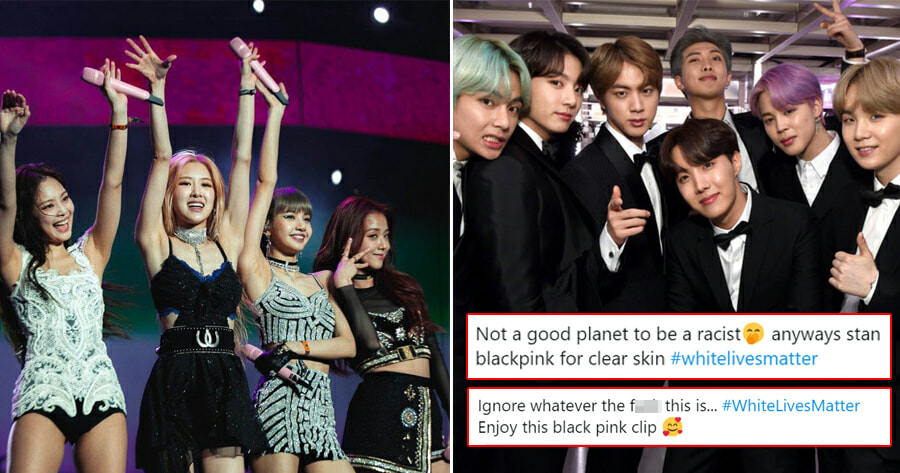 However, they’re not quite getting their way on social media as K-pop fans have hijacked their ‘movement’ and we’re living for it!

How have they hijacked it, you may ask?

Well, fans of K-pop groups like Blackpink, Monsta X, BTS and others have been using the #WhiteLivesMatter hashtag to drown out racist messages on Twitter by posting anti-racist messages along with photos and videos of their favourite k-pop groups, reported ABC News.

ANYWAYS, FUCK YOU RACISTS STREAM DAECHWITA FOR MY KING AND LEARN TO LOVE EVERYONE EQUALLY. YOUR LIFE WOULD BE SO MUCH EASIER IF YOU DO.#WhiteLivesMatter pic.twitter.com/vCgOoaPU5u

To all the racists people who opened this hashtag #WhiteLivesMatter pic.twitter.com/vherWo3ieI

Ignore whatever the fuck this is… #WhiteLivesMatter Enjoy this black pink clip 🥰 pic.twitter.com/BvzouQhiGh

Not a good planet to be a racist🤭 anyways stan blackpink for clear skin #whitelivesmatter pic.twitter.com/vHNZNMlsoA

“#WhiteLivesMatter LMAO I WAS READY TO INSULT THE S— OUT OF EVERYONE,” wrote another. “THEN I SAW THAT K-POP STANS ARE DESTROYING THE [hashtag], DAMN NEVER THOUGHT I’D BE THAT HAPPY SEEING K-POP FANCAM.”

“Imagine trying to trend #WhiteLivesMatter like a typical racist and Kpop fans said ‘Not on my watch b—-” another wrote.

Similarly, the #WhiteOutWednesday hashtag has also been bombarded by K-pop fans.

#whiteoutwednesday is this actually trending-
kpop stans unite to take out the trash 😌💅 pic.twitter.com/SYvqVdJaCF

wtf is this #whiteoutwednesday y’all whites were trynna do🤨🤨 pic.twitter.com/S2BHwUct9J

As of now, the #WhiteLivesMatter is still being flooded with K-pop clips and pictures and we have to say that these fans really mean business.