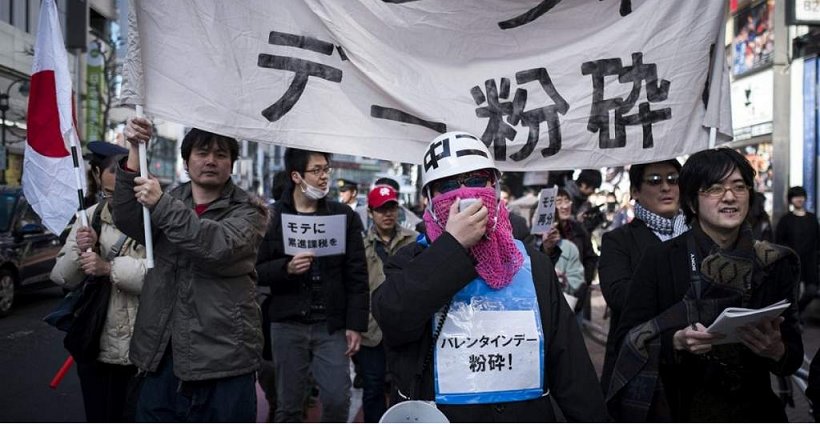 Valentine’s Day is celebrated all over the world and widely acknowledged as a day to commemorate your love with your significant other.

Nonetheless, a group of Marxist protesters from Japan known as ‘Kakuhido’ or ‘Revolutionary Alliance of Men’ that Women find Unattractive have been trying to put an end to this celebration of love. 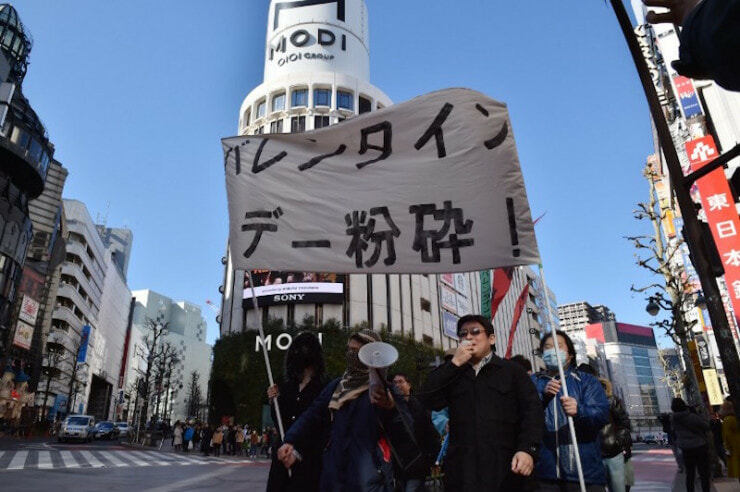 The grouchy group of spoilsports started a protest in the Shibuya district by holding up giant banners saying “Smash Valentine’s Day” and chanting phrases such as “public smooching is terrorism” as they deem Valentine’s day to be commercialism and capitalism.

The group of party poopers has more than 10 years of history, since being founded in 2006 by Katsuhiro Furusawa. He started Kakuhido after he was dumped by his girlfriend and took up reading the Communist Manifesto.

After reading it, he deduced that being scorned by the opposite sex was a class issue, and thus started his campaign against Valentine. Hmmm, sour grapes? 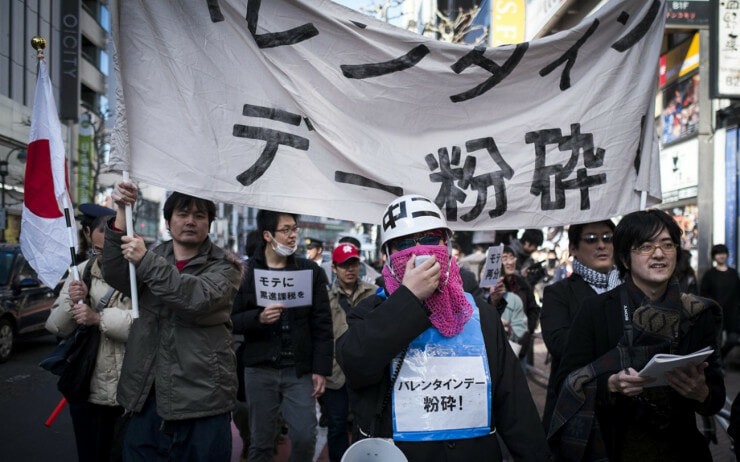 “Our aim is to crush this love capitalism. People like us who don’t seek value in love are being oppressed by society. It’s a conspiracy by people who think unattractive guys are inferior, or losers — like cuddling in public, it makes us feel bad. It’s unforgivable.”

Another one of their crusades also involves protesting against the “housewives who control Japan’s future” as Japanese husbands toil all day long at the office. On Valentine’s Day in Japan, it is a tradition for women to gift chocolates to the men in their lives, while their male counterparts will reciprocate on White Day, held a month later. White Day was a successful marketing campaign started back in 1980s by confectioners to draw in more sales.

33-year-old Akimoto says, “The tradition of giving chocolates means you’re always competing. “You’re judged by how many sweets you get. It’s a business strategy by the chocolate capitalists, it’s ridiculous. Religious overtones have been twisted and turned into a vehicle to make money.”

The killjoys find some joy in finally making some breakthrough after a decade of protests. “Recently you hear of more people spending Christmas alone or women growing tired of Valentine’s Day. We believe that through our fight, we’ve helped contribute to that social shift,” Akimoto said. 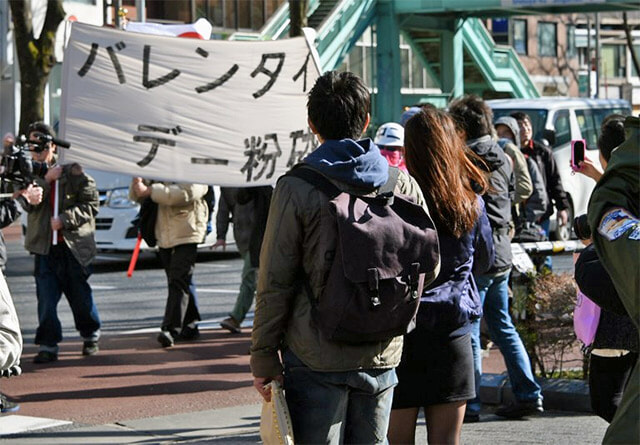 The group of wet blankets which is also anti-Christmas, anti-White Day, and planning to protest against Hallowen offers some advice to interested followers, “We’re saying you don’t have to enjoy Christmas or Valentine’s Day. Just spend the day doing normal things. Our enemy is formidable, but we are ready for a long, drawn-out war.”

These guys must be a real blast at gatherings!