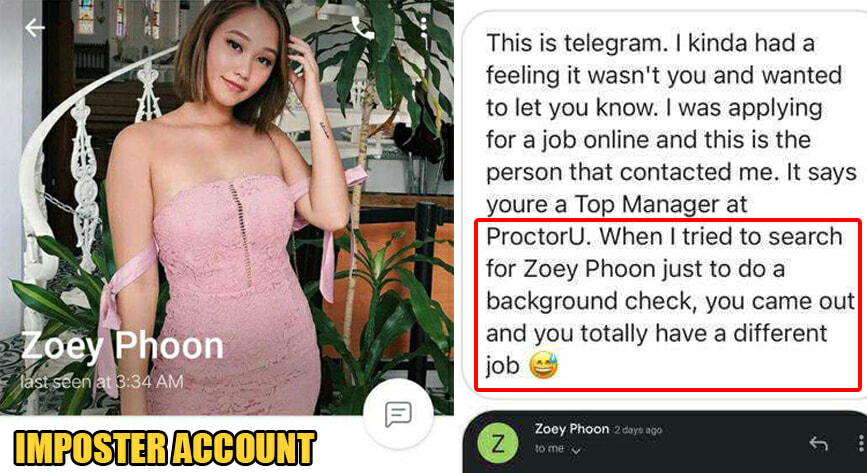 An anonymous individual has been impersonating a Malaysian social media influencer in order to scam job-seekers of their money. One victim was even scammed of 500 pounds (RM2,715) after being told to pay ‘HR fees’.

The influencer, Zoey Phoon, reached out to WORLD OF BUZZ in hopes of spreading awareness on this issue so that others don’t fall victim to it as well. Here’s how it happened.

Scammer posed as Zoey and as the manager of a company

Just a few days ago, the real Zoey had received a few messages on Instagram from several individuals asking her to reply to them on Telegram. But being inactive on Telegram and deleting the app awhile back, she didn’t think much of it until she continued receiving similar messages.

She received a screenshot of a Telegram account that had her name and photo but with several other incorrect personal details.

“I replied to the people who started sending me these screenshots and told them it wasn’t me. I told them I haven’t been using it and I’m studying in Bristol, not Birmingham, and I’m 22, not 27…and wtf is ProctorU?” she said.

One of the individuals who had informed her of the issue said that she had applied for a job on a website called onlinejobs.ph – a website for Filipinos to apply for jobs in other countries – and got an email from ‘Zoey Phoon’ who then asked to communicate on Telegram. 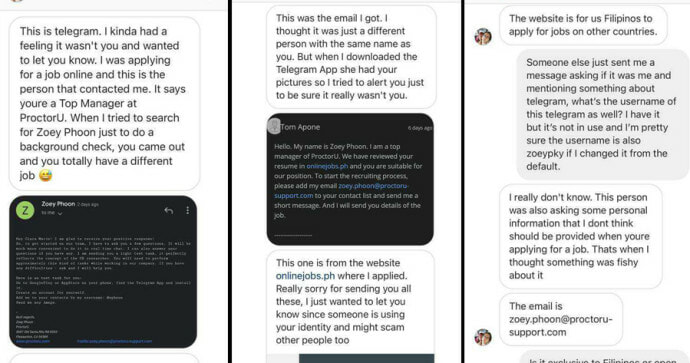 Conversation between the real zoey and a victim 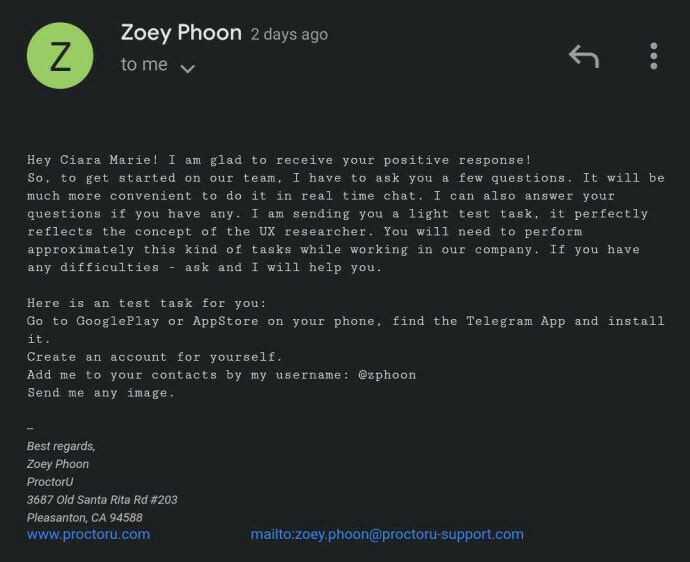 The email the victim received from the scammer

Zoey told WORLD OF BUZZ that she thinks these job-hunting websites are targeting unsuspecting victims and promising them jobs abroad or easy work-from-home jobs.

“And so they sign up and get an email from ‘me’ giving them instructions to use Telegram to communicate. The websites look very legit and professional,” she said.

“The use of Telegram was probably so they can disappear real quick after the scam.” 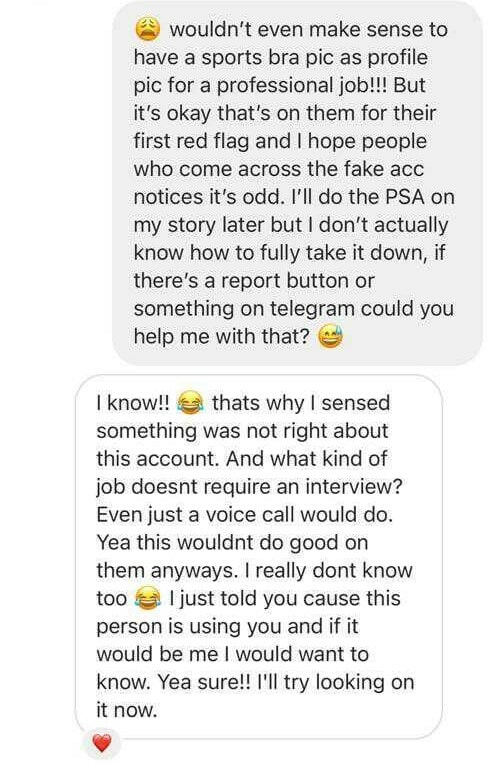 Not long after, a second individual reached out to the real Zoey after she made a PSA (public service announcement) on her Instagram account. He messaged her to clarify if she was the one communicating with him on Telegram and told her that he was facing the same situation. 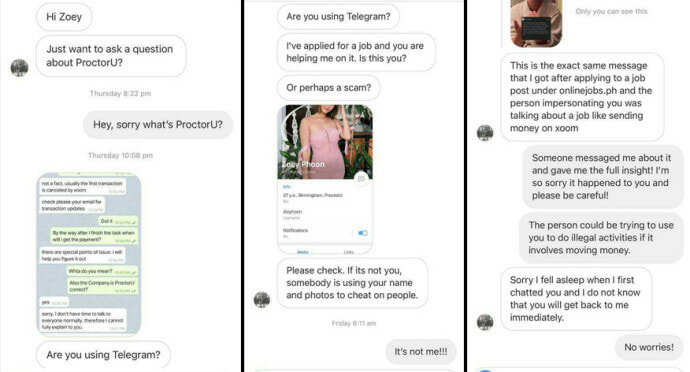 Conversation between the real zoey and the victim 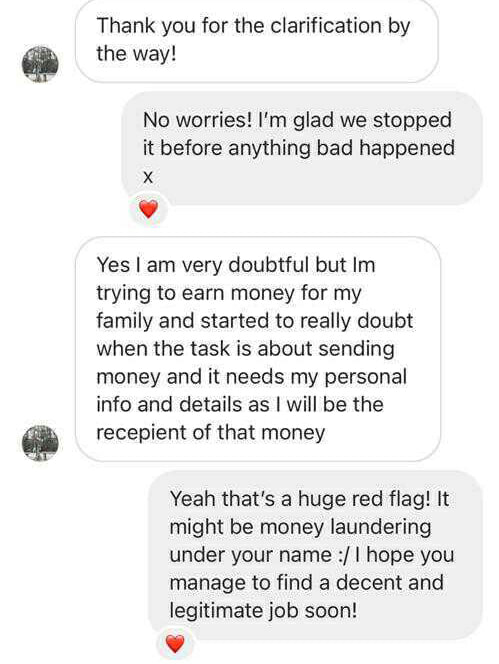 Conversation between the real zoey and a victim

He also sent a screenshot of the Telegram account with Zoey’s name and photo, along with several other screenshots of the conversation the victim had with the imposter.

In one of the conversations, the imposter had told the victim, “Sorry, I don’t have time to talk to everyone normally, therefore I cannot fully explain to you,” after the victims asked some questions about the job payment.

The scammer had also asked the victim to transfer money using Xoom, an electronic funds transfer service by PayPal. 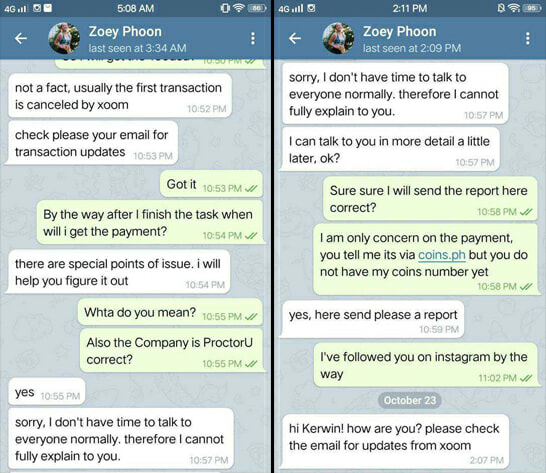 Conversation between the victim and the imposter 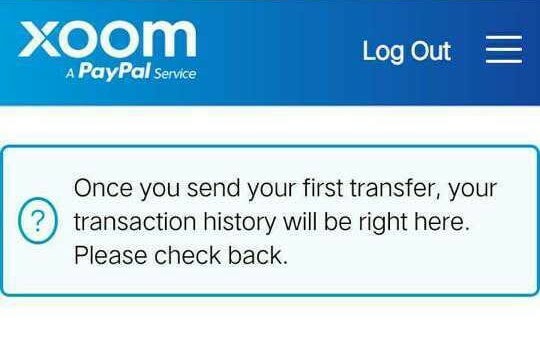 Scammer/imposter deletes all messages and disappears

After informing the real Zoey that she was being impersonated by the scammer, the victim called out the scammer who then tried to act confused by the victim’s messages. 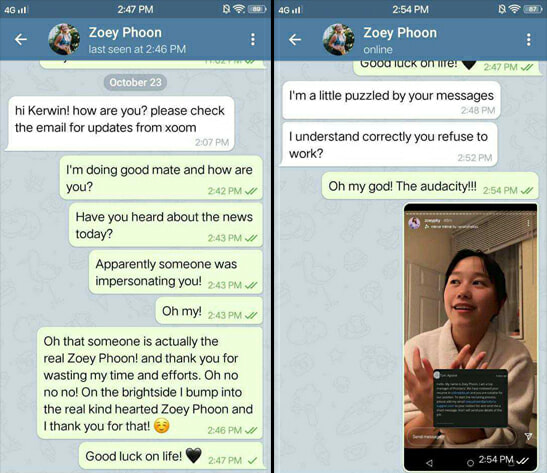 After being exposed, the scammer proceeded to delete all the messages from the conversations with the victims and went missing. This is possible as Telegram allows its users to erase messages without a trace with no given time limit. 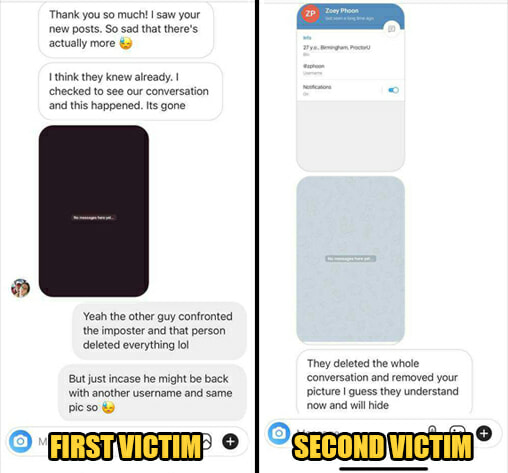 The third victim was scammed of RM2,715

The next day after receiving information that the scammer had deleted all the messages, Zoey was contacted by a third victim who is a student in the United Kingdom. The victim said that he had applied for a job via Telegram and was asked to pay 500 pounds (RM2,715) as an ‘administrative HR fee’ using PayPal.

The victim had, unfortunately, transferred the money, after which the scammer deleted the messages between them as well. 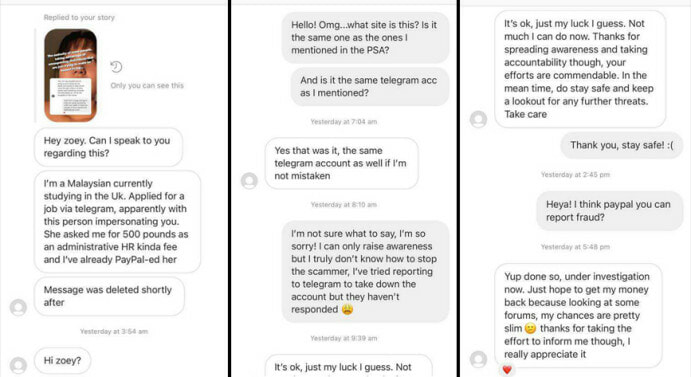 Conversation between the real zoey and the third victim

After the whole ordeal, Zoey told WORLD OF BUZZ that she has had people impersonate her on social media before but did not cause any harm.

“I have had people impersonate me on social media but it’s usually just annoying but does no harm,” she said.

“An easy report will do but this is extorting unsuspecting victims under my name and face around the world which is very upsetting for me and frustrating because I don’t know how to stop it.”

Hopefully, this story will create awareness on scams like this which can happen to anyone. If you’re applying for anything online and are required to provide personal details or transfer money in any way, please do some research on the person you are communicating with first before proceeding. 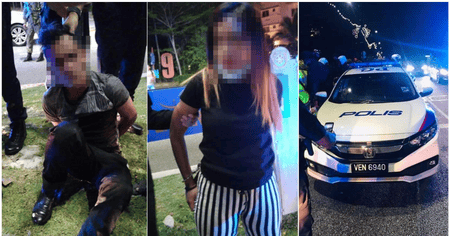