Former Prime Minister, Dr Mahathir Bin Mohamad, held a live press conference this evening at 4:30 pm to announce the formation of a new political party. However, Tun Mahathir also expressed a couple of views on what the party will seek to represent, as well as other important criteria like membership eligibility. Here’s everything he mentioned during the announcement: 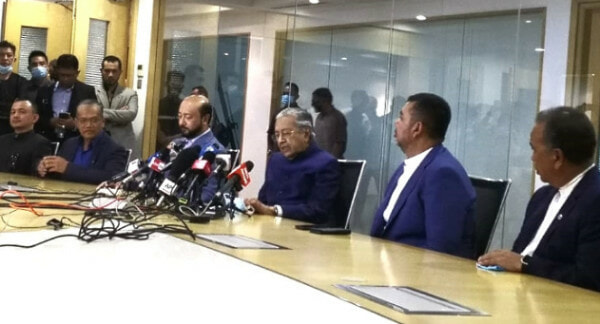 Mahathir announcing the formation of his new political party.

1. The party that is being formed is Parti Pribumi Bersatu Malaysia and will serve the purpose of overthrowing Najib Tun Razak’s kleptocratic government that was hijacked by the BERSATU president.

3. Members who were not hijacked still held on to the original fight and will not be nominated by members of PPBM that were hijacked in GE-15.

4. For us to continue our original fight, we have to form this new party that will be based on spirit and not money.

6. Amidst the madness of wanting to stay in power, their (other parties) fight is to safeguard the interests of the elite in order to ensure that support is not lost so they can remain in power.

7. This party will be inclusive and moderate and ensure other races that Malays are people who don’t betray, stay true to their promises, never reject a sincere and principled cooperative.

8. With this, we will also ensure that Malaysians of other races will also receive appropriate protection and treatment

9. The party also claims to reclaim the dignity of the people implicated in the treacherous nature of cheating, lying, corruption and greed caused by other Malay party leaders.

10. They (other party leaders) have made religion and the nation as a mode to gain support while their actions and deeds violate the teachings of religion and are contrary to the values of the nation.

11. We also want to restore the country’s honour as Harimau Asia.

12. The new party will not be tied to any mixed party-that is, Pakatan Harapan or Perikatan Nasional.

13. Our fight is still to eliminate corruption and kleptocracy

14. There is no guarantee that anyone will hold any particular position int the party or in the government.

15. Party members and officials must accept and practice the provisions in the Constitution and in accordance to the rules of the party.

16. A Disciplinary Committee will be set up to determine which laws and regulations are in force.

When one member of the media asked whether non-Malays or natives would be allowed to join the party, Tun M replied, “we will be very fair to all the other races but we feel there is some problem of the Malays that needs the attention of a Malay party.”