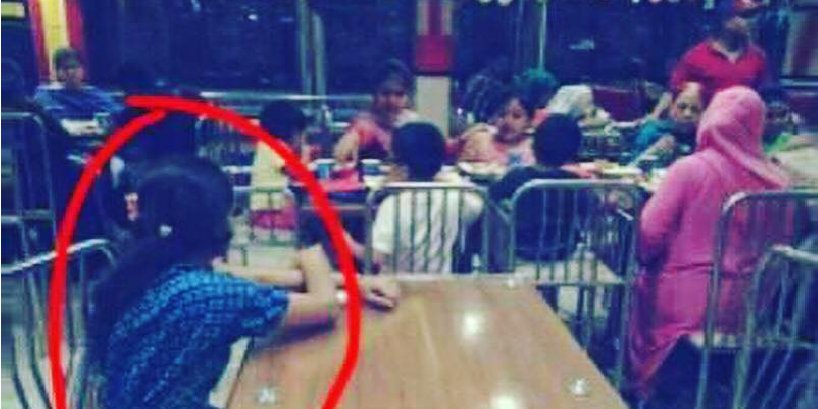 If you have ever grown up with a pembantu rumah or a babysitter, you can understand how loving they actually are towards you. Even though they are not our parents, they loved us like their own anyways.

So when this picture of a family having a feast in a restaurant but their maid sitting alone emerged, netizens just cannot fathom how they could do such a thing. 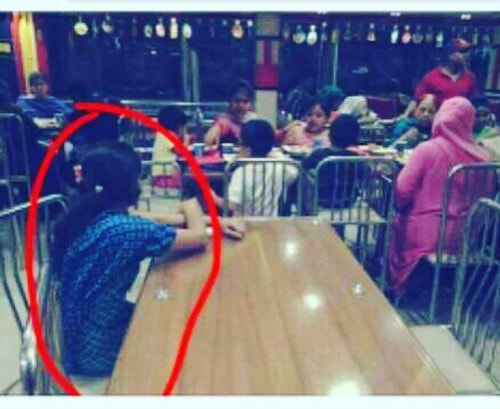 Highlighted in red is the domestic helper to the family sitting in front of her. From the picture, they are seen to be having a good time but they maid is hunched over there staring at them.

The picture was taken by Michael Fanny in Jakarta, Indonesia. In his post, he writes

“(A domestic) helper is part of your life. Reflect on your humanity. Imagine if you are in her position, no phone to play with, uninvited to eat. Eyes could only look.”

“Love and appreciate our (domestic) helpers, our drivers, our mechanics, our plumbers.”

“Life is not about profit and loss, it is not about ourselves. But by giving a bit of what we have, we are loving our god who we believe in.”

The photo and caption took the internet by storm with over 57,000 shares! Many people sympathized with the maid and agreed with Michael’s words.

“It’s sad that this kind of practice is still being followed by many.”

“Domestic helpers are humans too.”

“It is sad really if there are those who still think and behave like this.”

After the post went viral, Michael added an extra note at the end as he saw many people bashing on the family.

“Please do not judge the employer. We should take the positive values and throw away the negative values from this issue. We should be generous and not stingy among ourselves. Love your god and love everyone else, regardless of who they are.”

Unfortunately, this is not a rare case as we’ve often heard about families abusing their helpers and not treating them like family. Even though domestic helpers basically take care and tend to the family’s every whim!

So people, let’s all remember that just because someone is working for us or if their jobs aren’t as fabulous, it does not mean we can mistreat them. We are all humans after all, and everyone should be treated equally.