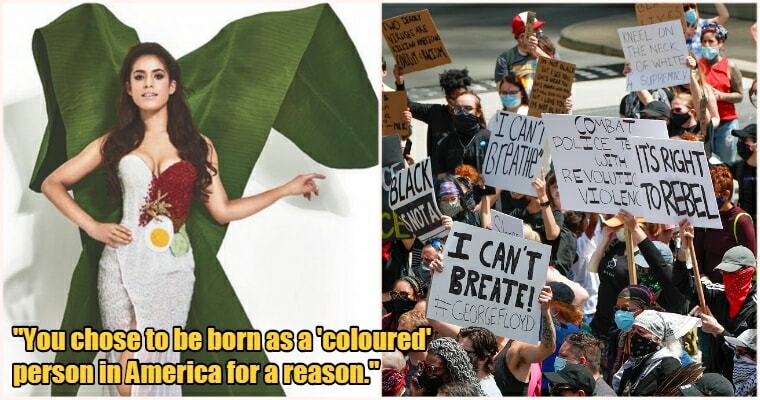 Even since George Floyd, an African American man, died after he was arrested and pinned to the ground by a police officer who had his knee to Floyd’s neck, riots and protests have erupted across the United States (and the UK, we last checked) as many took that as the last straw in the long line of police brutality cases towards African Americans.

But the protests in the US was not the only action taken by the people. Others all over the world took to social media to show their solidarity towards the #BlackLivesMatter movement, turning the movement into an international cause, and for good reason. But there are still others out there who don’t support how the movement is conveying their anger.

Malaysian comedian Dr Jason Leong took to his Facebook page to highlight a message written by the Miss Universe Malaysia 2017 title holder, Samantha Katie James, who spoke out on how African Americans should calm down and take police brutality as a life lesson.

Ladies and gentlemen, the most fucking stupid thing I've read in the past few days, and I've been reading Wan Fayshal's…

In her Instagram Stories, Samantha elaborated that the international support for the movement is uncalled for as it has nothing to do with people living outside of the United States and added that people should accept it as it is ‘inevitable’. 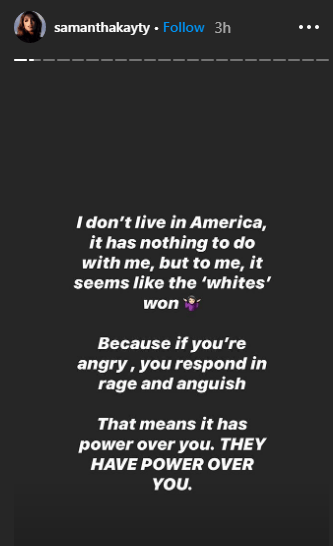 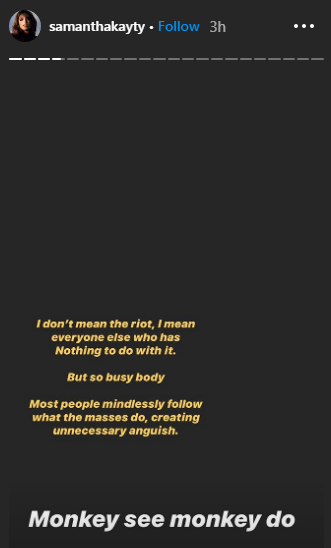 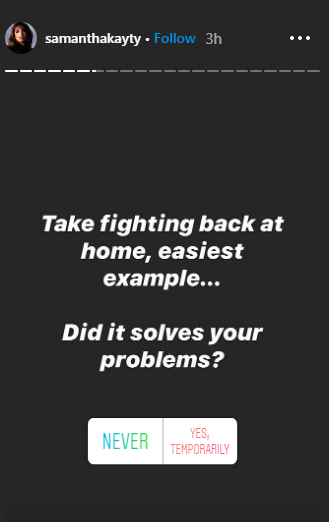 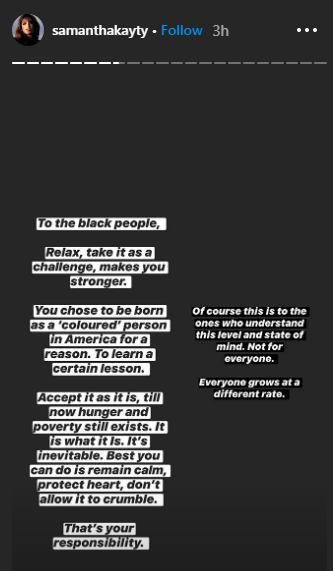 Her overall message basically means that non-Americans are only supporting the movement only because of the media portrayal of the incident and that just like poverty, racism is something that cannot be controlled, hence people should not get angry over it.

She also added that “You chose to be born as a ‘coloured’ person in America for a reason”.

Dr Jason Leong had something completely different to say.

“Ladies and gentlemen, the most f*ck*ng stupid thing I’ve read in the past few days. Our Miss Universe Malaysia 2017. What a f*ck*ng waste of space. So, to all the black people in America getting killed for literally sleeping and jogging, just relax! Take it as a challenge! If you die, just get reincarnated and try again. It’s like a video game! If you die, just restart the game,” he sarcastically put.

Others shared her Instagram Stories out of complete bewilderment of her statements. 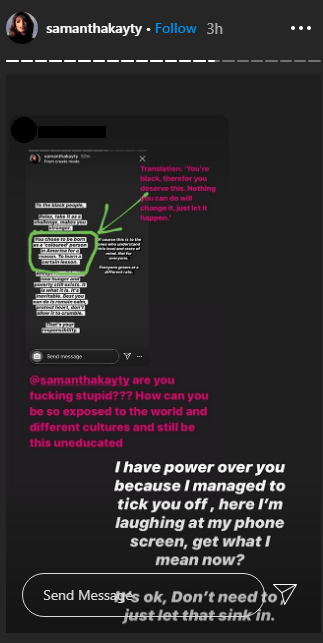 This netizen wrote, “How can you be so exposed to the world and different cultures and still be this uneducated?”

In one of the Instagram Stories, she continued by sharing her own experience with racism as a comparison, where she wrote about how she was told by her school headmistress to not bring western culture into the school because she is Malaysian Chinese-Brazilian. 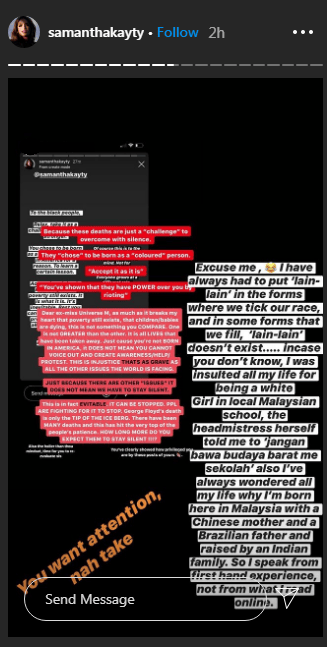 She wrote, “In case you don’t know, I was insulted all my life for being a white girl in a local Malaysian school, the headmistress herself told me ‘don’t bring western culture to the school’.

It’s truly sad that racism has always been common in Malaysia (and we’re not trying to downplay her experience here) but there is also a very big difference between being disheartened by racists remarks and being scared to walk down the street in front of your own home because a police officer might shoot and kill you. 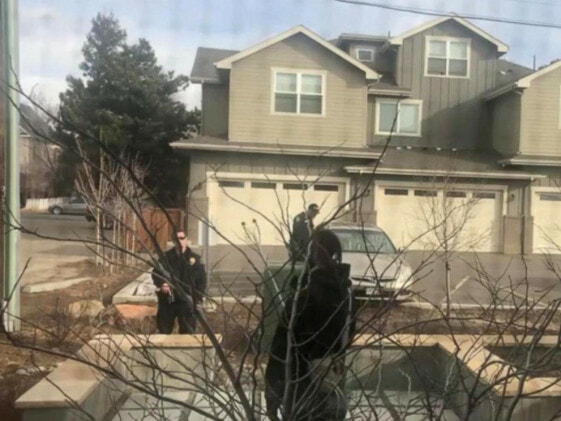 At one point, Samantha even mentioned that there’s no point in responding with rage because “It seems like the ‘whites’ won.”

But the Black Lives Matter movement (the rioting, the protests, the anger and the international support) has never been about a battle between African Americans and Caucasian Americans, but it’s more targeted towards the fact that police officers in the US, despite race or religion, have been unethically carrying out their jobs by racially profiling, wrongfully arresting and killing African American citizens for no justifiable reasons. 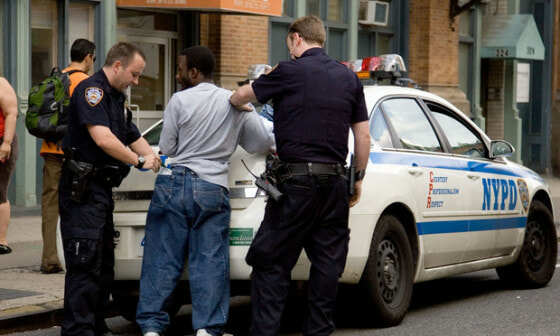 The people have a right to be angry because police officers are meant to serve and PROTECT the community, which means to ensure they have the RIGHT SUSPECT who is PROVEN GUILTY of a crime and act accordingly. Not shooting and asking questions later, after innocent people have died by their hands, especially after the person didn’t even resist the arrest and gave in to the police officer’s custody.

Also, the ‘whites’ didn’t win anything as they too are avid supporters of the movement as they also clearly see something wrong with policing in the United States. 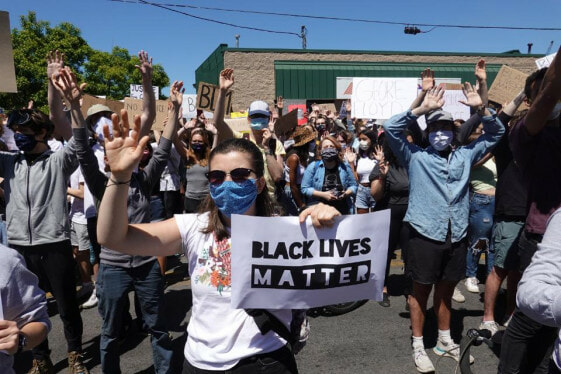 We understand that she may have written the postings with only good intentions and the need to spread love and goodness during such trying times, but it’s safe to say that her message is considerably flawed.

Plus issues like this, where innocent lives have been lost to injustice, deserve all the support they can get, even if it means the support comes from outsiders as well.

In the immortal words of the Noble Peace Prize winner, Martin Luther King, ‘A riot is the language of the unheard’ and the American activist, Rosa Parks, ‘It is better to protest than to accept injustice’.

We’ve reached out to Samantha for comments and still waiting for response. In the meantime, let’s not bash Samantha for her words (because cyberbullying is never the answer to anything), but instead, share why it is important that we all stand up to injustice.