The Finance Ministry said that the increase was due to the State of Emergency and the Covid-19 pandemic.

A recent circular by the Ministry of Finance(MOF) has caused concerns amongst Malaysians after it was revealed that the government has now amended the procedure for the granting of government projects to allow up to RM50,000 in direct tender. This was an increase of RM30,000 whereby only projects at RM20,000 and below were allowed to be given without going through an open tender process.

In the MOF circular letter dated 16 February 2021, the ministry has amended the direct appointment of G1 and G2 contractors for government projects from RM20,000 to RM50,000 from 16 February up until 1 August 2021, the same date the State of Emergency is due to be lifted. However, the appointment of contractors under this procedure allows for it to continue well after 1 August, given that it is a long-term project and signed within the time frame mentioned. 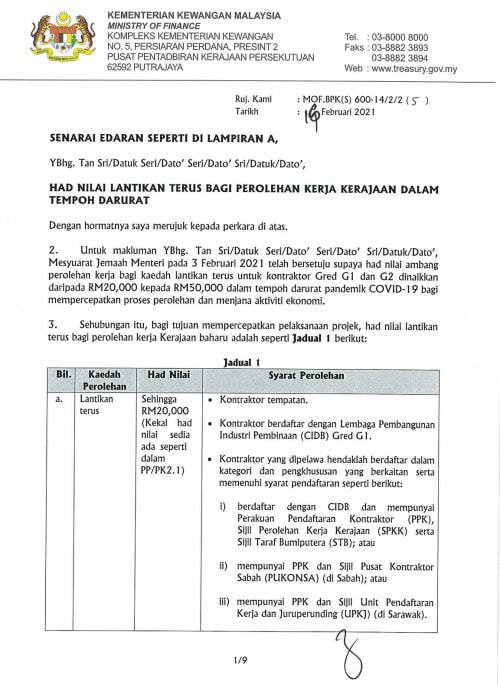 The circular also lists down the requirements for the contractor to be granted the direct tender project worth between RM20,000 to RM50,000, which you can can view here. MOF stressed that the amendment to this procedure was due to the State of Emergency as well as the Covid-19 pandemic whereby they needed to expedite the procurement process in order to revive the economy.

However, the sudden increase in direct tender procurement by MOF has raised some red flags amongst Malaysians given how this new procedure can be open to abuse of power. Moreover, given that this amendment was only through an obscure circular not found in the MOF official website or publicly published as a press statement also raises questions.

Many argued that the granting of projects through direct negotiation or direct tender risks the practice of nepotism and cronyism, particularly when there are no independent entity to govern these appointments. Furthermore, given the enforcement of the State of Emergency, Parliament will not convene until after 1 August, hence the list of direct appointments under this procedure could not be discussed and scrutinised in the Dewan Rakyat.

The MOF building in Putrajaya.

Nevertheless, MOF does have a sound logic behind the approval of this amendment given procurement process could take up a long time which would be detrimental to the rakyat during a time of need such as during this Covid-19 pandemic. Furthermore, the amended procedure by MOF did put in place certain requirements to avoid abuse of power, including:

What do you guys think about the amendment by MOF? Do you think it’s necessary or should be avoided at all cost? Share your thoughts with us in the comments. 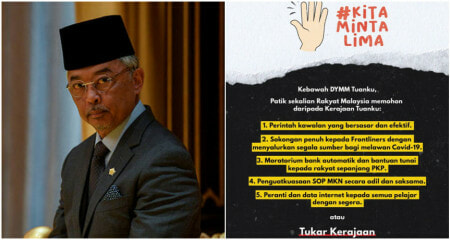