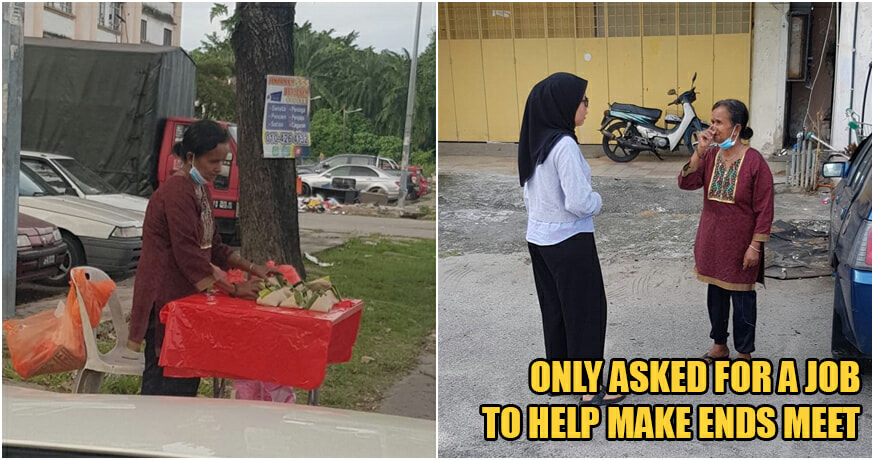 As the world enters a global recession, it is inevitable that many people will wind up facing the direct consequences of economic slowdown as industries grind to a halt and businesses struggle to stay afloat. Retrenchments are the new norm and it is estimated that as many as 826.1 thousand people have been unemployed by May 2020 as a result of Covid-19.

However, while cases of unemployment are pretty bad all around, there are still those in society who face even more dire circumstances due to the pandemic, driven to destitution and desperate measures to keep alive. Having little to no savings to fall back on, people like this auntie selling packets of nasi lemak for only RM1 to make ends meet are confronted with ever challenging odds.

Her story was recently shared over Twitter by netizen @RoobGanesan, who would often run into her setting up a humble little stall by the roadside selling packs of nasi lemak. Curious, he decided to stop along the street one day to pick some up for himself and members of his staff. Asking her how much a single packet would cost, the aunty told him: “RM1.”

“I bought 10 packets on the spot, with plans to distribute them to my staff. While chatting with her, I found out that she is also a cancer survivor and that her life had been severely impacted by the MCO period.” he writes.

Saddened by her plight, Mr Ganesan then took it upon himself to help the auntie find a new source of income and coincidentally, thought of a friend who had been planning to hire workers to help with peeling onions at an eatery. Introducing his friend to the aunty, he managed to secure a job for her.

“Thank you so much. Both of you are like angels sent down to help me.”

Mr Ganesan then goes on to remind that for many people living along the poverty line, they sometimes don’t seek to be offered handouts, but instead want to be granted the opportunity to earn a living on their own to ensure their own financial stability.

“Help doesn’t necessarily equate to money. Help can come from all sorts of avenues, as long as you are sincere about offering it.” he said.

His Tweet, which has since gone viral across social media, shows how a moment of kindness can truly change a person’s life for the better. Many netizens have rallied behind him in support, commending him for his empathy and compassion towards a complete stranger, while showing support for the aunty and her future endeavours.

Similarly, we would like to salute Mr Ganesan for being a shining example of what Malaysians should aspire to be, and wish the aunty nothing but the best for the future.