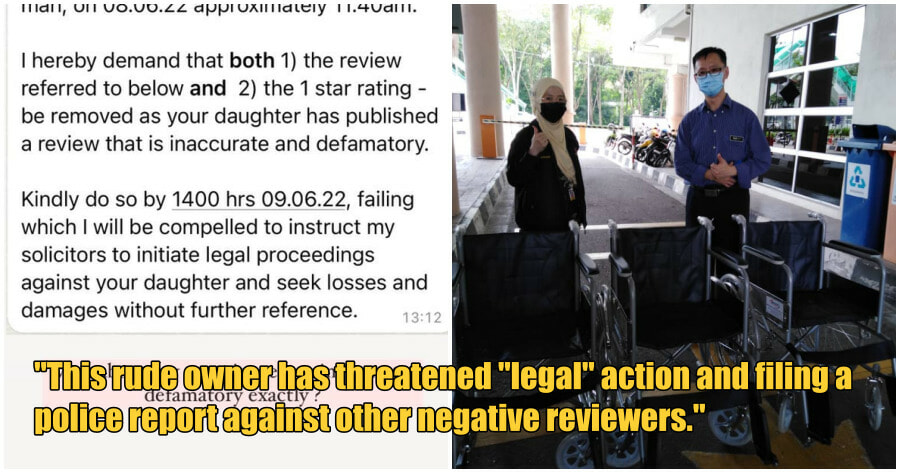 Imagine giving a 1-star review for a business on Google Maps, only to be threatened with police reports and legal action to take it down?

WORLD OF BUZZ has an exclusive story where Malaysians have been threatened with such action. Every single (negative) comment was met with threats of police reports, legal proceedings, and in some instances, brutal name-callings. What’s worse is that all these can be publicly viewed on the Google Maps review section.

(Update: 40 minutes after WOB reached the business owner for a statement, all negative responses by the owner have been amended or deleted).

It all began when Brandon Jack and Anita Loh’s father needed to have his wheelchair repaired. Anita Loh, her dad, and her dad’s driver all went to the shop Reliance Penang Wheelchair & Hospital Bed & Philips Respironics Everflo Oxygen Concentrator & Commode & Medical Supplies. 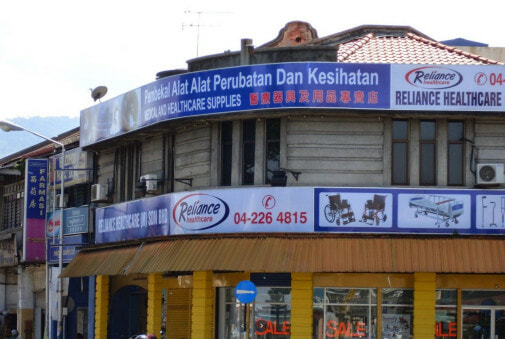 “Despite being called “Reliance,” the salesperson refused even to let us browse their goods and even attempt to repair the broken pedal of a miserable wheelchair just for the simple fact that it was (not) bought from them.”

“The Facebook page says they repair parts for the cheapest price, which is why we went there in the first place.” 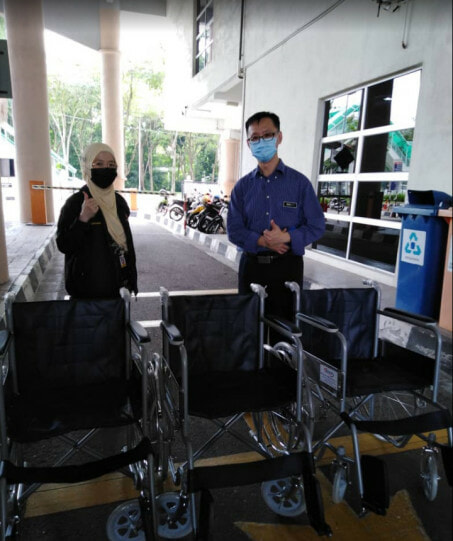 She describes what happened:

“Awful customer service, definitely could have handled things better. I had just walked into the store with my dad in the wheelchair earlier this afternoon, where instead of simply telling us they don’t carry spare parts of any other brand (which I’m assuming is the case – giving the benefit of the doubt here), the salesman kept repeating that they do not and will not repair any other wheelchair brands, even if they did have the parts.”

“For context, the wheelchair my dad used did not have any brand, and the part we were searching for was merely a footrest pedal. I don’t know if this is their company policy, but if it is, I find it very odd, to say the least.”

She continued by saying that:

This was Reliance’s WhatsApp response to the Google review: 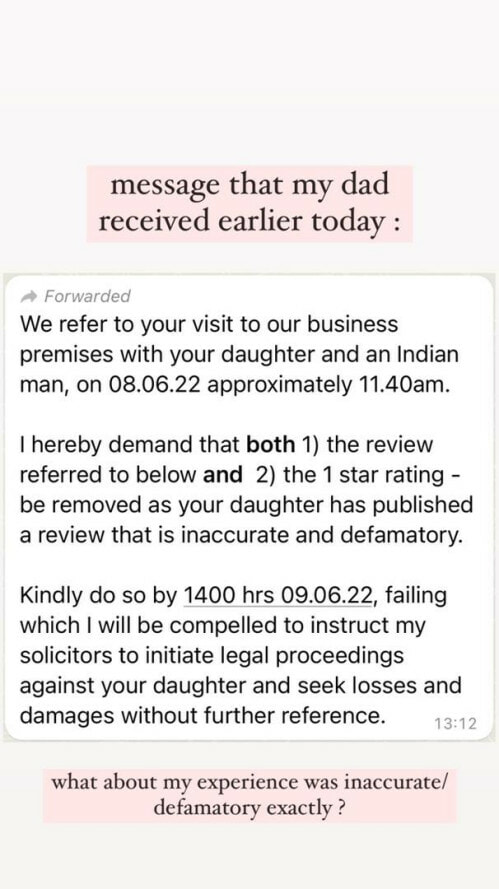 Brandon then went to give his own 1-star review, to which he was responded with the confirmation of a police report made by Reliance. 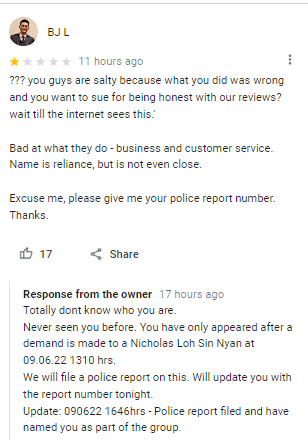 “We will file a police report on this. Will update you with the report number tonight. Update: 09/06/22 16:46hours – Police report filed and have named you as part of the group.”

Brandon stated that Reliance Penang Wheelchair had threatened every negative Google review with a police report or legal proceedings; however, other 5-star reviews were left untouched.

“This rude owner has threatened to take “legal” action and file a police report against other negative reviewers. The owner even mentioned in my (Google) review that they have already filed a report, from which I asked for the report number (just in case my lawyer needs it). They have publicly mentioned our and other customers’ full names on Google.”

“The threats are very disturbing, and I am pretty upset that humans can do things like this while operating a business with the name “Reliance” in it. I am truly ashamed for my father, whose full name is now also on the Google review (he has no idea this is happening, by the way).”

WOB checked and found 12 negative Google reviews from different people, going all the way back to 3 years ago, where they had all been affected with similar threats. 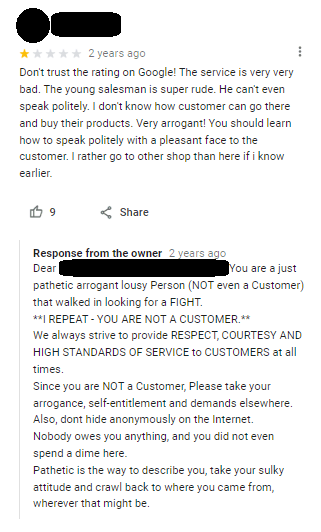 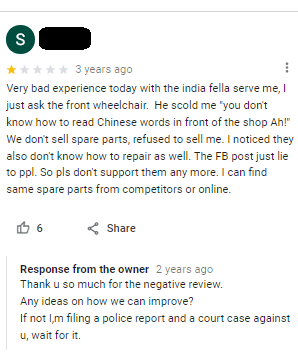 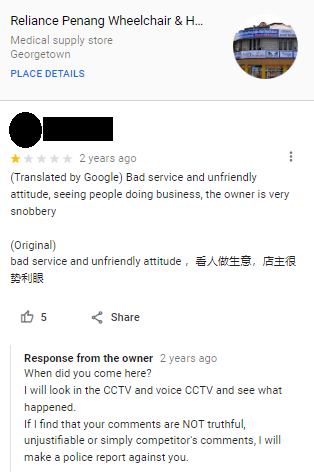 We reached out to the manager of Reliance Penang Wheelchair & Medical Supplies, Ram, for his version of the story.

“As for the wheelchair, they never said they wanted to repair it; they just asked for a location. Once they (Anita and her dad) were here, I told them that we can’t do the repairs and that we don’t have the parts for it, and I am not charging you for it. It’s as if you drive a Nissan vehicle but head to a Toyota service center for spare parts.”

“(I thought) we had wrapped it up peacefully; I don’t know why they ‘attacked’ after. The exchange was very brief; we did nothing to offend them. It’s the fact that when I asked to remove the comment, they decided to report to other news websites.”

However, one of the Malaysian reviewers also faced a similar issue where they brought in their wheelchair for repairs, only to be faced with the same threats, three years ago: 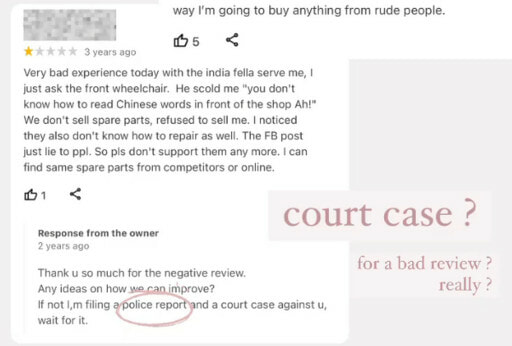 Ram also mentioned how some of the reviewers did not step foot into his shop and claimed to have CCTV footage proving so, yet they are giving bad reviews. In modern parlance, he was “review-bombed,” an Internet phenomenon where a number of people leave negative user reviews online.

“How can you attack people when you haven’t even come to the place? I asked them to take down the posting, and they refused. They then ask their friends to attack us (write bad reviews). So how do I defend myself? How else can I defend myself?

WORLD OF BUZZ reiterated that the reviewers were complaining about the customer service, with or without purchasing any goods. Ram stated that was only a recent case and that there are many more positive reviews. However, WOB brought up the fact that the harsh threats went back three years ago, which are all publicly viewable.

After a brief pause, Ram admitted they might have had faults for how they treated customers a few years back.

“For the ones before this, I accept, we might have had faults, but the recent allegations are unfair.”

“However, I have plenty of positive reviews. I supply for the whole of Penang; what about that?”

Update: 40 minutes after WOB contacted the business owner for their response, the owner edited all negative responses on the Google Business page. 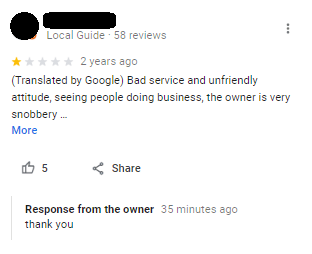 More than a century has passed since ‘the customer is always right’ mantra came into existence and became a rallying cry for customer empathy and love.

Despite the backlash, Reliance Penang Wheelchair & Medical Devices has gotten plenty of 5-star reviews from many happy paying customers, who have commended them for their service and for going the extra mile for what they need.

While the world may have changed with the advent of technology and social media, today, more than ever, businesses need to tread carefully. It doesn’t matter if the customer is right or wrong – they have the power to go viral, and it’s on the businesses to acknowledge their pain points, especially if it is on a very public platform such as Google Reviews!

Have you faced a similar situation where you faced what you would describe as ‘rude’ customer service and were served with a threat of a police report or legal notice? Do let us know! 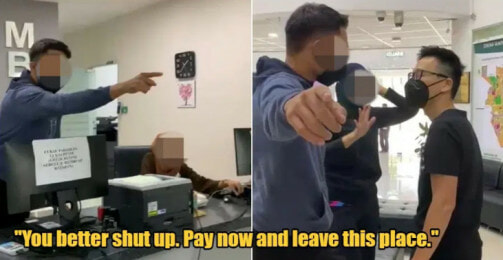