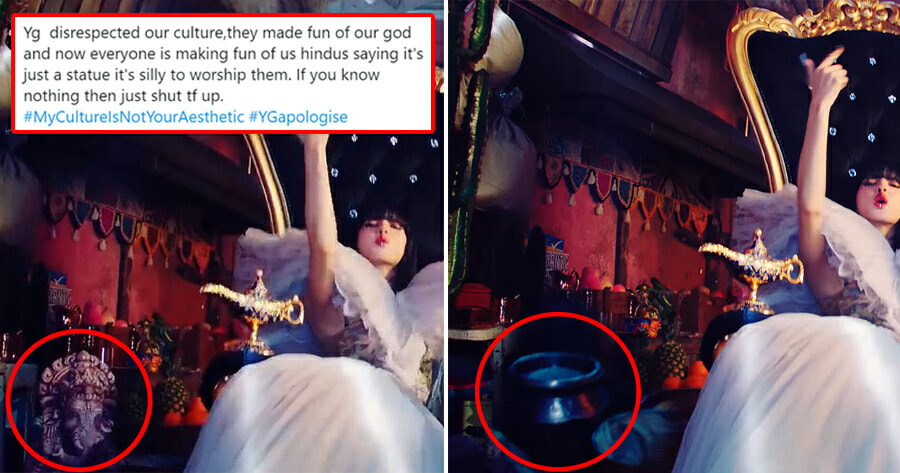 Blackpink has been the talk of the town ever since they released their latest hit single “How You Like That” with their music video being the fastest K-pop group music video to reach 200 million views. Uploaded on 26 June, the video has since garnered close to 240 million views and is still increasing at the time of writing.

However, the video has been receiving some backlash after fans noticed a scene in the video that featured a Hindu statue, Ganesha. The scene occurs at the 1:20 mark where the statue can be seen beside Blackpink group member, Lisa while she’s seated on a throne.

Many fans demanded that the statue be removed from the video with many expressing their dissatisfaction on Twitter with the hashtags #YGapologise, #BlackPinkApologise and #MyCultureIsNotYourAesthetic.

Blackpink label YG Entertainment has since removed the Ganesha statue from the music video, according to SCMP, and has replaced it with what looks like a cylindrical gas tank. However, many are demanding an apology from YG with some saying that just replacing the statue with another item is not enough.

“Quietly editing the video and acting like nothing happened just shows that you guys are cowards if you have the guts then send a public apology,” said one netizen.

Meanwhile, Blackpink fans, especially those who follow Hinduism, were disappointed that the Ganesha statue had been used in the video and accused YG of exploiting the religion and Indian culture.

Yg disrespected our culture,they made fun of our god and now everyone is making fun of us hindus saying it's just a statue it's silly to worship them. If you know nothing then just shut tf up. #MyCultureIsNotYourAesthetic #YGapologise pic.twitter.com/gf3ZyKBwFH

Ummmm…..YG we told you to apologize but you didn't. Now look a famous Indian news channel is writing an article about how you insulted our God. Just damm apologize already! #ygapologize #YGapologise #MyCultureIsNotYourAesthetic #Ganesha pic.twitter.com/j2D7oHy9fi

Actually I've never watched mv but saw this tweet. They are really disgusting. And still they are fighting with and not apologising#YGapologise #blackpinkapologize #MyCultureIsNotYourAesthetic

However, other netizens don’t seem to mind.

It's just a statue of an elephant why is everyone getting mad. Stop blaming lisa just because your boys songs flopped pic.twitter.com/Lc7lZEruM7 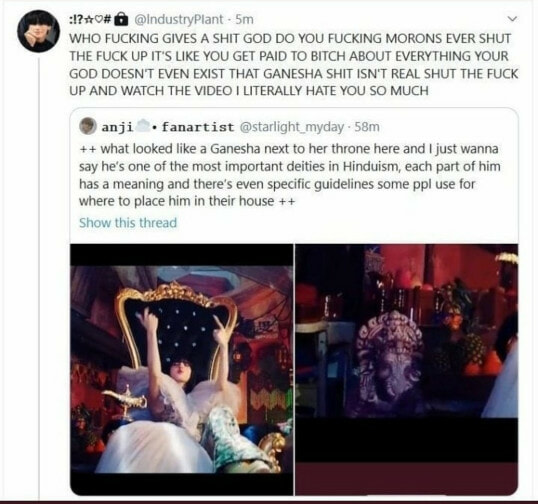 Meanwhile, others poked fun at the whole ordeal.

Blackpink is disrespecting mother nature by dancing on the floor where are the petitions??#BLACKPINK #YGapologise pic.twitter.com/LB8N3pMBa0

After criticism of the video escalated on social media, Blackpink fans in India released a statement on Twitter saying they did not approve of the “cultural degradation” and would complain to YG Entertainment.

We are aware of the issue in How You Like That MV.
We Belive that it's Offensive to usage of Lord Ganesha's Idol and we will try to contact YG Entertainment regarding it pic.twitter.com/UB2IC35XjM

Can you spot the ‘cylinder tank’?

Also read: K-Pop Fans Are Hijacking The #WhiteLivesMatter Hashtag So Racist People Are Drowned Out!