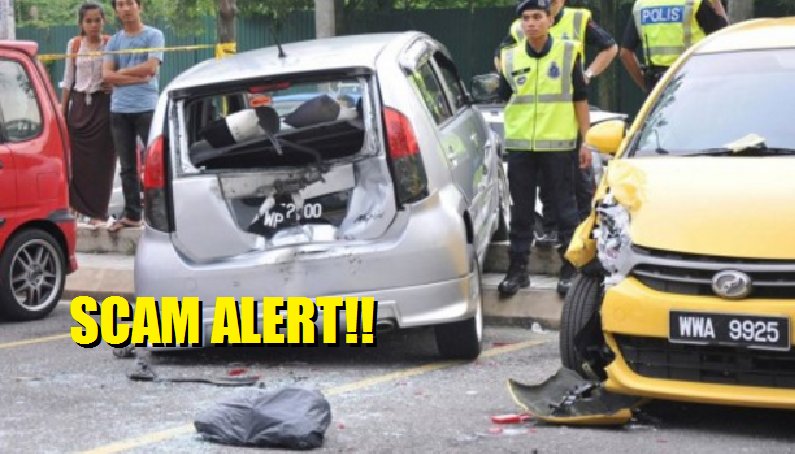 There has been complains of a scam in Malaysia that has been becoming more apparent recently. Facebook user Mikha shares his personal experience of a very unfortunate event that he believed was a scam.

Mikha was driving during a heavy drizzle and when he was approaching a turn, he only came to realize that there was a man at the corner waving a branch seemingly to warn vehicles to slow down.

“The road was slick with water. I rewound the past minute in my head. I was going at a steady 60kph or so and was beginning to slow down for the turn…when suddenly a man waving a big branch appeared in the middle of the right lane seemingly out of nowhere. Panic took over and slammed my foot on the brakes. That, and my attempt to quickly switch to the left lane, did the trick: my car went into a spin that ended as quickly as it began, leaving me facing the way I had come from.”

Dazed, Mikha thought it was his fault for not seeing the man sooner before he saw two other cars that experienced the same accident.

” A guy down the road shouted at me, not very rudely, to come over.

He took back his cellphone promptly. “Ok, you panggil sendiri.” Then he went back to waving stuff at cars.”

Taken aback, Mikha assessed the scene and realised these man deliberately stood at a cornering where people would not see them until pretty last minute, hence accidents would occur.

He writes, “It was a scam, sure as day. They were standing right where drivers would only see them as they made the turn.

I left my car where it was and flagged down a passing Malay couple. They very kindly gave me a lift to a petrol station further ahead, where I called my parents. By the time we drove back to my car, ANOTHER car had crashed.”

Mikha tells everyone he is fine, although his car did suffer a few injuries. However, his post aims to serve as a PSA (public service announcement) as to warn people of such a scam. Some who has read this post agree that this type of scam exist, a few commented that the cheaters would even go as far as to put oil on the roads.

The nerve of scammers these days are getting bolder, it’s appalling to realise that acts like these that risk the lives of others can be done.

Seriously. What is this world coming to?