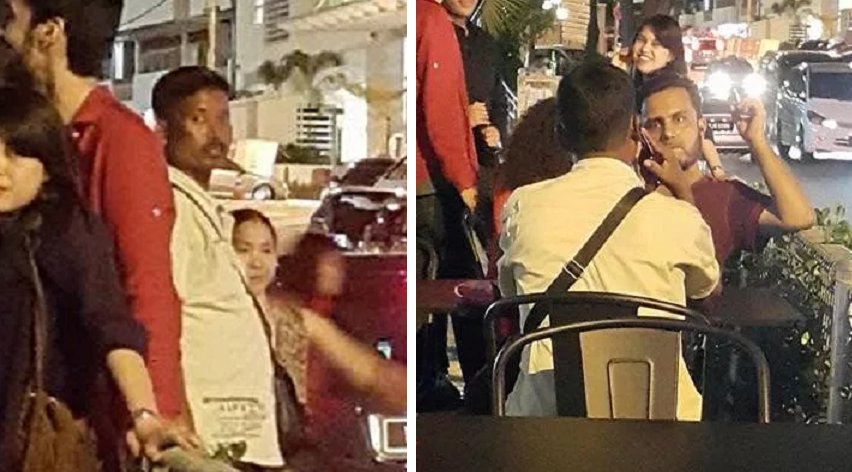 “A simple act as walking to KK Mart to buy a drink turned into a nightmare!” wrote fellow Malaysian Devi Sudarsani who recounted her ordeal of being stalked by 2 guys when she was out to KK Mart at night.

She was out on an errand to KK Mart to buy some drinks during the night when upon entering KK Mart, 2 guys followed her from behind.

“As I was walking around KK Mart to look for the fridge (coz I’m blind), I did not realise 2 guys were following until I found the fridge and turned around. Thinking it was them being creepy I brushed it off!”

She initially wasn’t suspicious of the two men, but as she walks to the counter, they too walked out without buying anything but simply stood outside and stared at her.

Sensing something amiss, she asked the KK Mart worker to accompany her back and even so, the men would not give up!

“As I was waiting to pay, they were outside watching me. I asked the staff who they were and they said “Tak tau kakak”
Feeling scared I asked the staff to follow me and the sweetheart said yes without hesitation (bless him). These assholes followed us the whole time even as we were crossing the street many times to lose them.”

Devi headed to Zion Club KL, where she met her manager Azizi. There, she pointed out the 2 men who had been following her. Azizi suggested her to sit outside and observe how they responded.

To their surprise, these two men also did likewise, and sat one table across from where Devi was seated, and kept staring at her. When waiters ushered them away for not ordering drinks, they had the audacity to continue the staring at the corner of the road! Serious creep game over there!

After that Zion Club’s security came by and she reported her ordeal to them. When the security team confronted the men, one of them left, leaving his companion behind. When asked why they kept on staring, the remaining guy denied it entirely and claimed they were being rude to him!

After three painful hours, Devi made a police report against them. But what happened next really took home the prize of the night.

Apparently, when there’s no “touching”, it can’t be reported as a case! Unless one is raped or molested, a case can be filed. Otherwise, expect the police officers to dismiss it as “nothing”.

Upset and frustrated, Devi could not do anything but warn others on social media.

“So only if I was “TOUCHED” will you take action?!!
I need to be raped or molested for my report to be valid?!” she exclaimed.

In Malaysia, there’s no specific law that criminalises stalking or harassment. And even if a police report was made, police officers can’t take any legal action towards the accused.

Upon knowing such a case, Malaysians were shocked that there were no specific law governing ‘stalking’ which enables officers to do something about it. We’re pretty sure that extent is already considered harassment.

Some netizens were furious and wondered if someone actually had to wait until something physical happened only report it. Where is the safety?

This sounds too much like a loophole that many potential criminals could exploit. Much like how Malaysia has no laws against “grooming”. Is such a case only the tip of the iceberg?