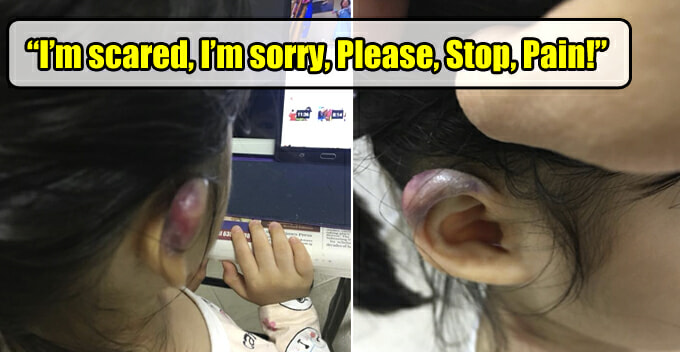 There’s a difference between punishment and child abuse, and this case is definitely the latter.

On March 10, a heartbroken mother named Claudia, took to Facebook to share how her 3-year-old daughter was abused by her kindergarten teacher until the toddler’s ear was severely bruised. Just look at these photos! 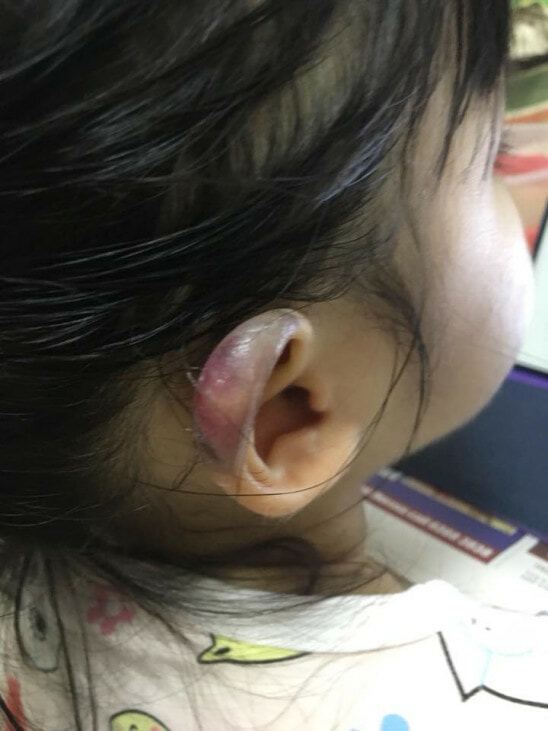 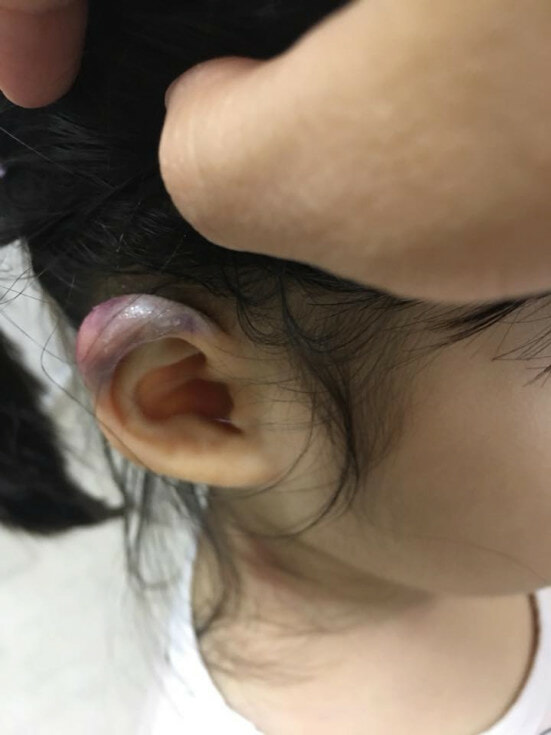 Based on the post, the father had picked the daughter up from the preschool on 14 February and right away, he noticed something was off.

“When they reached home, my hubby asked me to check what had happened to her ear and to my horror, her ear was badly bruised to such an extent that it was swelling badly. My heart bled and when I asked my daughter about what had happened, she lost control and just broke down in tears and cried.”

Claudia called the preschool and demanded an explanation, but none of the teachers could come up with one. “The form teacher said that it was a mystery,” she wrote.

She has also sent her daughter for an examination and the doctor was shocked to see the little girl’s injury.

“He diagnosed it as a form of traumatic bruising that was caused by the exertion of great intentional force, and not a result of insect bites or drug allergies.”

The mother soon lodged a police report and the daughter was only able to give her statement after she had calmed down. The 3-year-old then revealed to an office the exact teacher who had pinched and twisted her ear. Good job kid!

The next day, Claudia sent her daughter to KK Women’s and Children’s Hospital in Singapore for another diagnosis. The injury was classified as ‘non-accidental injury’ and most probably inflicted by the teacher.

Claudia went back to the preschool to seek assistance, but was told by the supervisor that all the child’s teachers are church-affiliated. “He (supervisor) fully believes and trusts that none of his teachers would abuse a child to such an extent,” she added.

“Ever since this incident, every night, my girl would wake up suddenly from her nightmares, crying out, ‘I’m scared, I’m sorry, please, stop, pain!’ She has been shouting out her form teacher’s name too.” 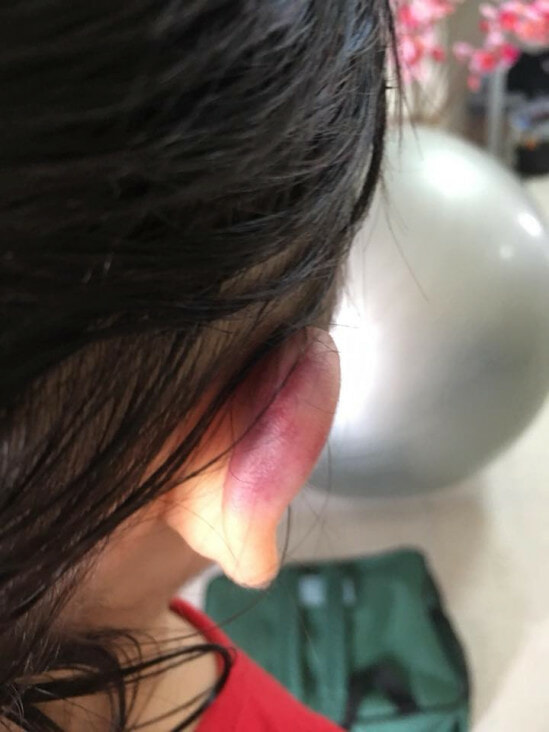 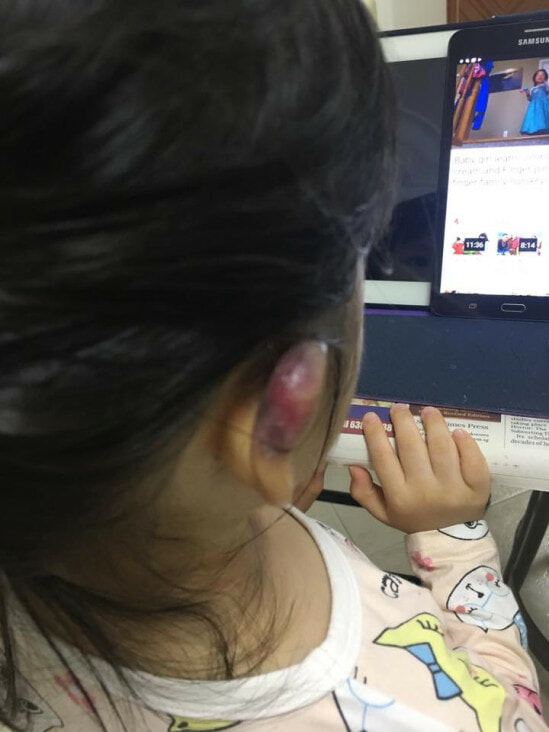 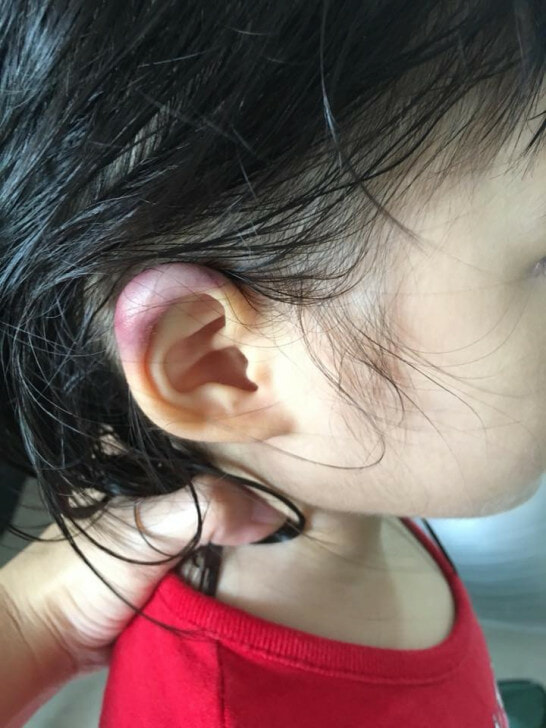 The mother is exasperated as the police investigation is progressing too slow and the preschool is shunning away all the responsibilities. Besides, she has also been denied access to all the CCTVs footages from both the school and the police.

“Back home, when I was reading story books to her, she would suddenly say that her teacher is ‘the evil wolf’ in the story of the Three Little Pigs and that she was the ‘wicked queen’ in Snow White, or that her soft toys would help protect her from her evil teacher. Even when she heard minor renovation noise from my neighbour’s flat, she would say that it was the sound of her teacher coming to pull her ear once again and she would break into tears!”

Claudia is so close to breaking down too as she’s coping with her husband’s acute stroke while having to seek justice for her daughter. As such, she posted her predicament on Facebook to seek advice from the public.

We at WORLD OF BUZZ sincerely hope that Claudia can stay strong and persevere during this trying time and that her little daughter can overcome the trauma soon. Don’t give up, Claudia!

Update: The preschool has conducted its own investigation based on the CCTV footage but denied that the 3-year-old girl suffered the severe bruise on its premises, according to the Straits Times.

Also read: 5yo Boy Brings His Bantal Busuk to Class, Gets Confiscated by Teacher 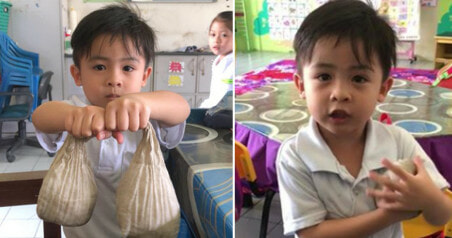