Zouk Singapore is known as one the hottest clubs in the country. DJs and even patrons come from all over the world to have a good time here, so imagine the uproar when someone faked as an international DJ in Zouk!

Clubbers who went to Zouk Singapore on September 10, 2016 thought that they were partying and taking pictures with DJ Marshmello, an internationally-known DJ.

But turns out, it was just an imposter in the world-class DJ’s signature outfit all along! 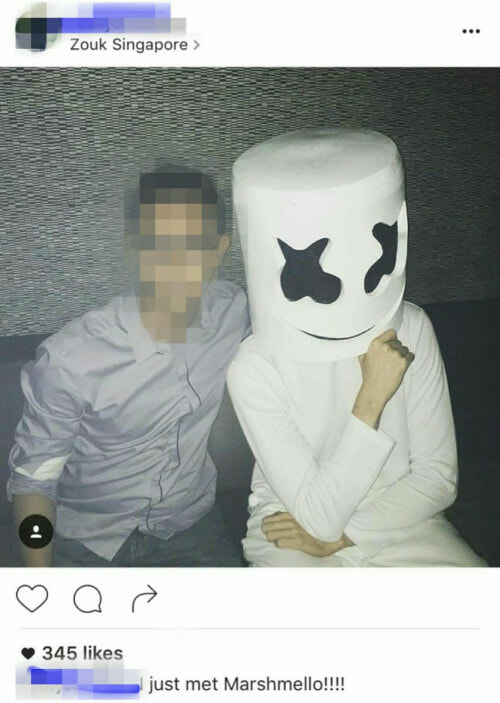 Zouk Singapore’s very own resident DJ Jade Rasif condemned the club in a tweet which was recently removed. DJ Rasif highlights the importance of integrity when dealing with such controversial situations, and even stated that Zouk Singapore lied to their customers.

He also furiously questioned how Zouk Singapore would allow a faker to perform at their console.

Although DJ Marshmello was in Singapore for the Ultra music festival, but according to DJ Rasif, the former did not attend the club at all.

After seeing the Singaporen DJ’s tweet, DJ Marshmello decided to re-tweet it and even added his own comment. He slammed the club and situation as “super whack”. 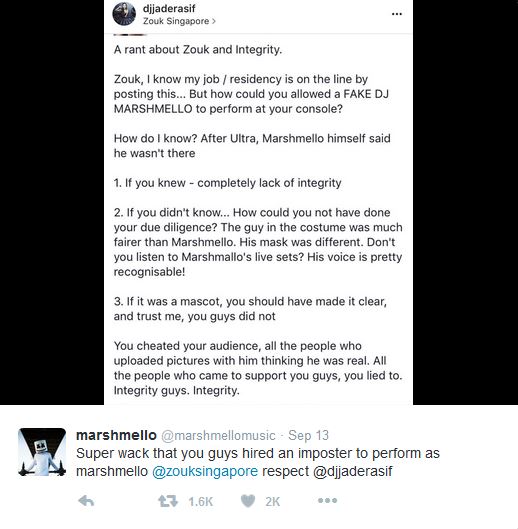 Since the two tweets went viral, Zouk Singapore has issued a statement mentioning that they did not hire the imposter and iterated that they would have made an announcement of hired DJs. 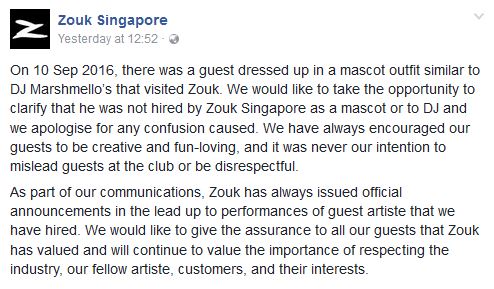 Fans of the club trashed the Facebook post with heated comments, especially when they allowed an imposter to actually play for the crowd.

“In the first place, if u even realized someone was “creative” enough to dress as Marshmello, u should have got the person to remove his outfit. I’m sure u guys noticed his outfit and the flock of people towards ‘him’ and yet do nothing about it.”

Some even joked about the situation.

“Didn’t know Marshmello was Asian. Look at his skin colour haha.” one wrote.

“So will Showtek be the real Showtek or doppelgangers next week?” another user commented.

This isn’t the first time someone pretended to be the world renown DJ.

Recently, Marshmello himself has been receiving a lot of heat as haters berated that the cause of this ‘Marshmello Imposter’ issue is his ‘stupid marshmallow hat’.

The DJ has yet to reveal his ‘true form’ to the public and unless he does so, we’ll probably see more than one.

Hey, at least with all these imposters, DJ Marshmello won’t feel so ‘Alone’ anymore amiright?