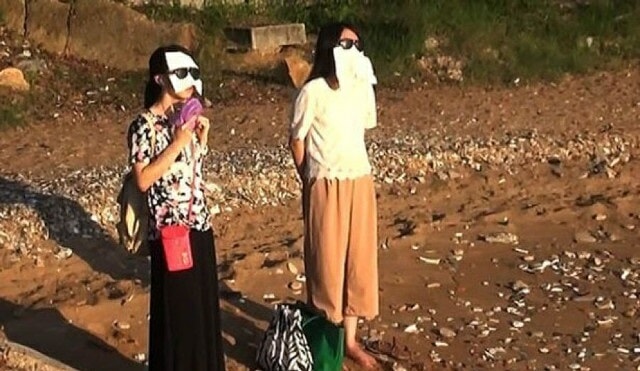 Recently in Hong Kong, a group of young women gathered at a spot in Sam Ka Village to stare into the sun for long periods of time in a bizarre attempt to lose weight.

Women in their twenties are spotted to have arrive at the village beach early morning and then again during the afternoon. According to observers, how the diet goes is that they take off their shoes, put on sunglasses, set an alarm on their phone and then simply begin staring right into the sun.

It was reported that the women believe that by looking into the sun they can lose weight by absorbing solar energy and substituting that for the actual calories they need to stay alive usually obtained by eating food. By staring into the sun for long enough, they believe, they will lose the need to eat.

“We practice sun-gazing as a substitute for eating,” one dieter told reporters. “Some of us who have already finished sun therapy now eat less than before, and others don’t even have to eat at all!”

It turns out the sun-gazing diet has been around for awhile, some even say its history as an ancient therapy traces back thousands of years.

According to The Independent, in the early 20th century the practice was popularized again by William Horatio Bates as a form of alternative therapy. However, the theory that looking at the sun can save you from the trouble of having to eat food is a new notion.

According to a 2011 documentary called “Eat The Sun,” beginner sun-gazers must stare at the sun for 10 seconds. After that they must increase that by 10 seconds each day until after nine months they are staring at the sun for 44 minutes each day.

Obviously, we were taught not to look into the sun since we were young because the blazing light will damage your eyes. Doctors warn that this idea of sun-gazing is harmful.