A pretty bizarre case has gone viral this week of a misadventure that left this woman with a bad taste in her mouth and a hard lesson on the importance of safe sex.

According to the Daily Mail, a 31-year-old woman was rushed to the hospital in Alicante, Spain. Doctors recognised her symptoms as anaphylactic shock, a serious allergic reaction that can be fatal if not handled correctly.

The woman had been reportedly performing oral sex on her partner when she suddenly struggled to breathe, began vomiting and started breaking out into hives, which we imagine ended that intimate encounter pretty quickly.

For illustration purposes only | source: giphy

When asked about her allergies, the woman informed the doctors that she was allergic to penicillin, a common group of antibiotics. Adding to the confusion, she also said she had not taken any medication or any unusual foods before the incident.

The woman’s account did show that she had swallowed (you know what) after sex; however, she hadn’t had any issues in past encounters so doctors ruled out allergy to semen, which is actually a thing.

In a strange twist, it turns out her 32-year-old partner had, in fact, recently taken amoxicillin, a form of penicillin, to treat an ear infection. The man had taken the drug four hours before the encounter.

The medics then suspected that her allergic reaction was caused by a “seminal transfer of amoxicillin”, in other words, penicillin from the penis.

While there have been past cases of allergic reactions from drugs transferred through kissing and sex, this unfortunate case of oral sex is believed to be the first of its kind and was duly published in the British Medical Journal Case Reports.

The lead author of the report, Dr Susana Almenara has urged everybody with known drug allergies to be aware of potential risks to avoid similar situations.

The woman was later given doses of adrenaline, steroids, and salbutamol. She could breathe freely after six hours and was fully recovered a week later.

Dr Susana and her colleagues had requested the woman to return to the hospital for further studies, but the woman did not attend any follow-up appointments. Granted, the woman was probably embarrassed and found the invitation hard to swallow.

Wrapping up the case, Dr Susana has recommended all lovers to “wrap up” as well, by using condoms before any recreational activities (including oral sex) for safety.

Well, you heard the doctor. Being considerate for the health of your partner and yourself is a form of sexy. So to all our readers, remember to be aware of your allergies and always put safety first! 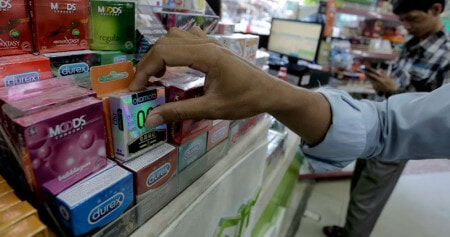