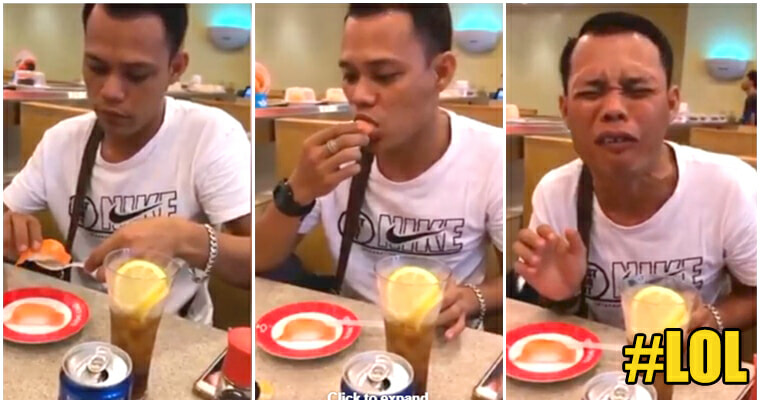 Let’s just be honest eh, eating raw food is something of an acquired taste. Not everyone’s a fan of sushi, and that’s okay! Still judging you though.

However, when this viral video came out on Facebook page BEST my, we couldn’t help but feel amused by this guy’s reaction towards raw salmon sushi.

Clearly, as a first-timer to sushi, this man obviously didn’t enjoy the experience. Probably he was challenged to consume the food, as you can hear whoever was recording behind the camera egging him to do it.

“If you make weird faces then you won’t get the money.”

“Just smile when you put it in your mouth.”

For a first-timer, we can consider this guy as pretty brave because he popped the whole thing into his mouth.

Which turned out badly, because he gagged right after, almost barfing out the raw delicacy.

Here, just look at this:

Could it be the fishy smell? The exotic texture? Well, whatever it was, everyone has their own tastes when it comes to food. And at least he was sporting enough to go through with the bet!

“Once upon a time… Hahahhaha.”

“That’s exactly how I was when I had it the first time… It’s totally fine afterwards.”

“First-timers will always experience this. Maybe after eating it two to three more times, he would be okay.”

Some think that people with pure local tongues should just stick with whatever they are used to.

“Why would you eat sushi when you are used to sambal belacan?”

In any case, he was brave enough to try. Eating food is an adventure on its own, isn’t it?

Also read: Study: Superbugs Found in Raw Seafood Could Cause Sushi Lovers to Be Antibiotic-Resistant 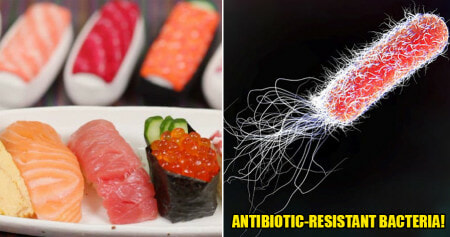