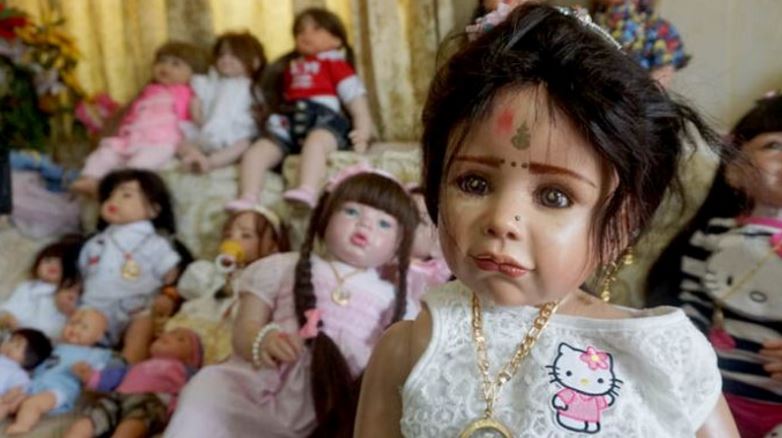 There’s a trend in Thailand where people will carry around their doll as if they were their own child. The owners would feed them and dress their haunted dolls up as belief that they will bring them wealth, blessing and even love.

If the sound of it doesn’t creep you, their life-like look will.

These are the Look Thep dolls, which translates to “Child God”. They were started by a lady known as Mama Ning over 3 years ago. Apparently she was inspired by the idea of making these dolls from the frustration of her disobedient son. So having an inanimate doll would be better company for her.

The Look Thep are soul-optional. If you’d like a soul to inhabit the factory-manufactured doll, a child’s spirit is invited to possess it.

However, the dolls recently gained popularity after a radio DJ, Bookkoh Thannatchayapan shared his astonishing story about his doll named “Wansai”.

He said on a TV show that, “The first day I got him, I took him out shopping for clothes in the baby section. Right after I paid for his clothes, I got a call that my canceled job was back on!”

After the unbelievable ordeal, Bookko asked Wansai for a bigger job and promised to buy it a gold necklace in return. And what do you know, Bookko got a call to audition for a great movie role.

“I feel like Wansai really exists,” Bookko said. “I love him as my child.”

Ermm I think I’ll pass on having my own possessed doll. It just reminds me of this guy right here. *shudders*