Living in the city or any urban area, I’m sure you’ll stumble into people who sell tissues, or knick knacks you’ll never find the use for. And this post is exactly about them. They aren’t really beggars. They don’t sit around waiting for money to be dropped into their cups.

They resell items they bought to make a profit;

or goods they personally handmade themselves;

or put out the effort by singing and playing music.

You feel bad for the person but then again, you don’t really want to spend your money on something worthless.

You may think that you’re rushing, or you tak sempat take out your spare change. So you tell yourself, “I’ll get the next one.”

that your small change will not make a difference either way so you continue on with your life when it probably means the world to them.

that you don’t even have enough money for yourself so why help others? and yet, you splurge on other unnecessary things like that RM50 outfit, RM20 brunch, and blow over RM100 on one night of partying.

You think.. that’s just how life is.

I remember feeling bad for an elderly woman and wanting to buy something from her to which my boyfriend stopped me.

He said, “these people are just a part of the scam. If you buy one from them means you’ll be supporting the illegal act.”

Then I thought to myself, “What if they weren’t part of a scam? What if they desperately needed my RM1 to buy bread for their starving bodies? How was I to know?”

I went on a trip to Bangkok a week later and one of those days, I was on one of their trains when an elderly man caught my eye. He wore a denim vest with hello kitty hairclips clipped on the inner side (where the buttons and button holes are). About 5 to 6 hairclips were stacked upon one another, filling up the whole inner part of his vest.

It was pretty interesting. To see a man who was probably 50 years old, carry around a bunch of girly hairclips on his clothing. It was also, somewhat sad.

Coincidentally he got off at the same station. He walked with a limp while bringing around his bag of what I suppose to be more Hello Kitty hairclips.

I said to myself, I am going to buy one from him and i did. When I was approaching him, he said “please buy from me. I’m hardworking.”

He sold it for 60 baht (about RM7), a little on the pricey side but it thought it was for a good cause and was willing to pay. He thanked me profusely then asked a little bit about where I was from.

I don’t know if he’s a scammer, or that he really needed the money for his supposedly sick mother, but I hoped that I at least helped a genuine person. If he was indeed lying, then that’s just too bad for me. 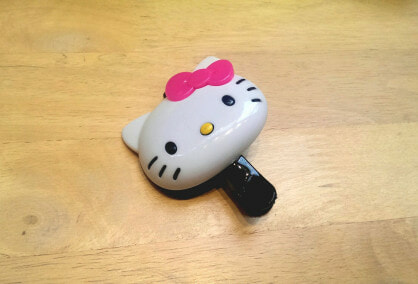 So, the question lies in all of us: to give or not to give?