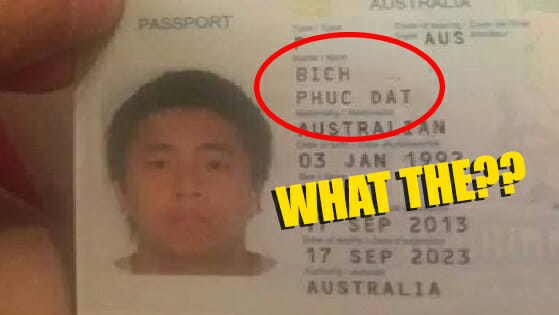 An Australian born Vietnamese has a rather tough life when his parents decided to give him the most epic name ever..

Phuc has brought his issue onto social media on a Facebook post which since gone viral because of his outrageous name. Some even thought he was trolling.

However what most people find funny is in fact a very frustrating case for the guy himself.

The 23 year old has lived his life in misery when he has to introduce himself to a stranger, always having to show his identity card just to prove that he wasn’t lying. Even then, people would accuse him of using a fake ID anyway.

He complaint how he is tired of having to explain himself every single time. Even Facebook has deleted his account multiple times thinking he was using a fake and thus obscene name.

“I find it highly irritating the fact that nobody seems to believe me when I say that my full legal name is how you see it. I’ve been accused of using a false and misleading name of which I find very offensive.

Is it because I’m Asian? Is it? Having my fb shut down multiple times and forced to change my name to my “real” name, so just to put it out there. My name.”

But no matter how you want to read his name, whether it’s:

It is still hilarious.

One would wonder what went through his parents heads when they had him named. #parentgoals

Our sympathy goes out to this brethren. May he continue his life in peace and serenity.