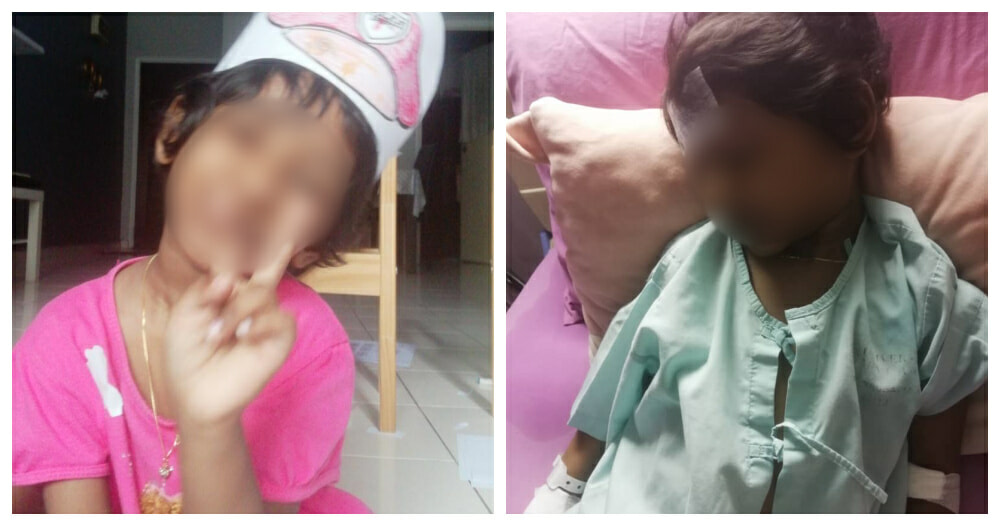 The family of three-year-old Shemeerna, who is diagnosed with Pre B Acute Lymphoblastic Leukaemia, is in desperate need of at least RM700,000 of funds to pay for her treatment.

Liberal Hearts Charity Association has reached out to WORLD OF BUZZ to share Shemeerna’s story in hopes that people will help contribute funds, as it has become an urgent matter.

Shemeerna was first diagnosed with the terminal disease at the age of 1 after finding out her white blood cells that were present in her bloodstream was higher than it had to be. She had undergone chemotherapy at University Malaya (PPUM) and since her case was rather serious, her mother had no choice but to quit her job in order to care for her little girl.

Thankfully, her mother who previously worked in an NGO managed to receive a substantial amount of money as a token of support and appreciation for her service over the years. This helped the family to cover some parts of the medical expenses at the time.

Over the years, Shemeerna underwent more chemotherapy but eventually, it came to the point where the cancer cells were still active. The doctors concluded that the chemotherapy had not worked effectively.

Still continuing to fight her battle with cancer, she underwent a bone marrow transplant (donated by her sister) in August 2020. She was admitted at the hospital for 90 days and was finally fit to go home in October 2020.

Struggling through a pandemic and facing a relapse

Although her family reached the point of low funds and income, as her father had lost his job when the pandemic hit and took up a job with LaLamove to make ends meet, they were still over the moon that they had their daughter around.

Until May 2021, when Shemeerna attended her appointment, the doctors identified that her white blood cells were once again not in a good state. They declared that she had relapsed. 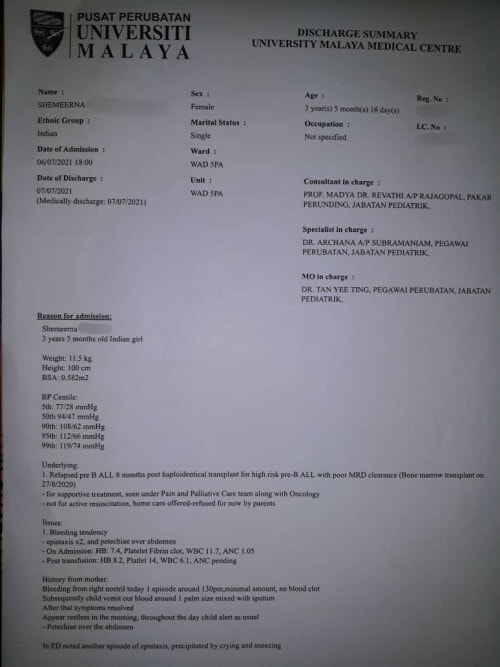 “The doctors in PPUM mentioned that there was not much hope for the child as she will not be able to undergo another phase of chemo as her body will not be able to endure it. They also mentioned that since she had also already gone through a transplant and yet her condition has not changed, they did not have any other option as the hospital only offers transplants as the highest medication for this disease,” Liberal Hearts told WORLD OF BUZZ.

Shemeerna’s condition worsened in June when she began developing excessive bleeding from her nose and ears. Now, the doctors have mentioned that she may only have 3 months to live.

The hopeful parents got a second opinion on 8 July from a doctor in the pediatric clinic at Subang Jaya Medical Centre (SJMC). Knowing chemotherapy would be too hard on the child and may worsen the situation, he suggested taking another medication. 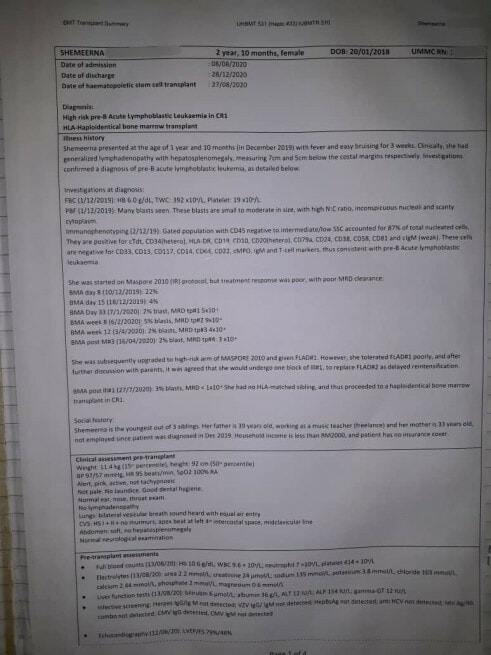 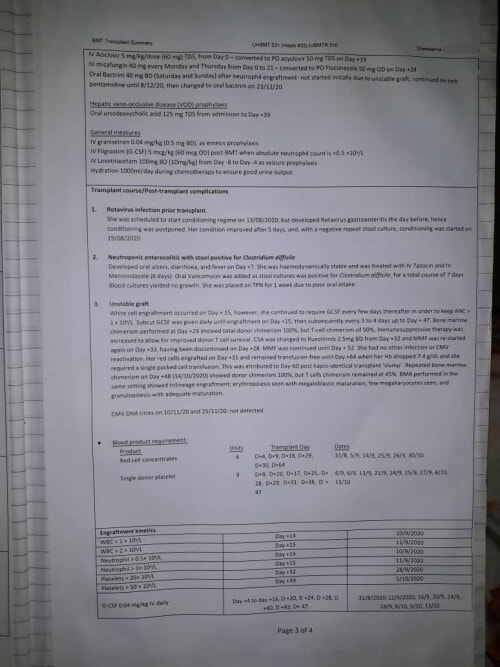 “This medication suggested by the doctor is immunotherapy (Blinacyto) which the child will have to consume for 28 days for 24 hours. The medication will be transfused into the child’s body and will have the ability to target cancer cells and eliminate them.

The doctor suggested this procedure as a substitute for chemo as this treatment would not destruct her other cells and only focus on the cancer cells,” Liberal Hearts told WORLD OF BUZZ. 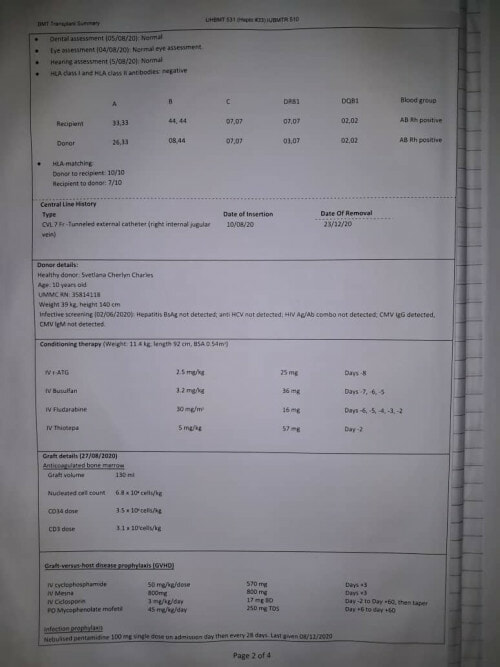 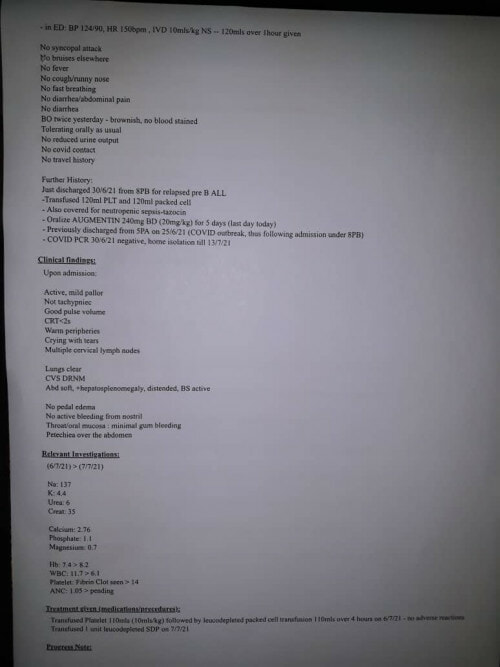 “At the moment the parents of the child are aware that the cost of her medication would reach a very high amount as it is a private medical center hence, they are now looking out for other government hospitals in order to receive the treatment at a cheaper rate.

They are worried and in distress as they do not have much time left. Right now they have confirmed the bone marrow test to be held tomorrow (10 July) with the support of some funds given by a relative,” they added.

According to the doctors, the total cost of the treatment would be over RM700,000 and may hit up to RM1 million!

Here’s how you can donate to Shemeerna

Liberal Hearts will be helping Shemeerna by raising funds with the help of the public so that this little girl has a fighting chance to live a full life.

Donations can be made to:

Once the donation has been made, please email the transaction slip to [email protected] 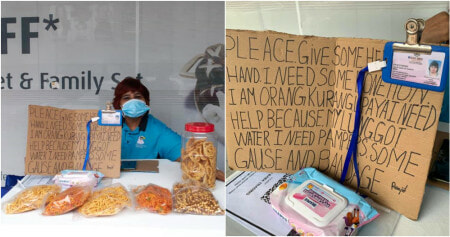