That is a godawful OUCH!

In a painful turn of events, two burglars found themselves very much the victims when they broke into the house of sex predator, Harry Harrington.

Harrington stands at a staggering 6 feet 7in and weighs over 300 pounds. So, that’s over 136 kg for those who baffle at the concept of pounds, like me. This man is ALL meat and muscles. True to his appearance, Harrington is often referred to as ‘The Wolfman’. 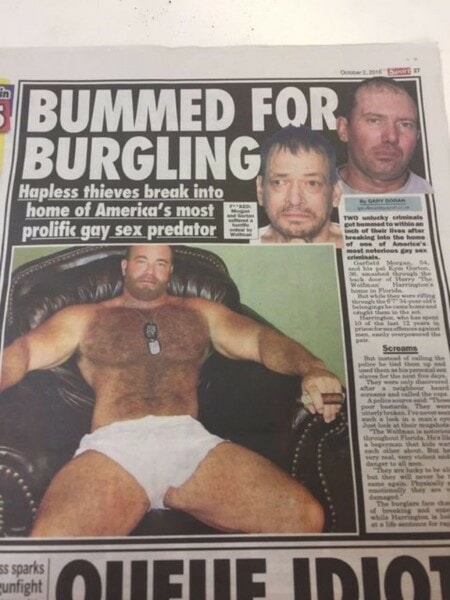 According to Thugify, Garfield Morgan, 54 and his partner in crime, Kim Gorton, 36 are professional thieves and have broken into hundreds of houses in the span of their career.

On one fateful night, Morgan and Gorton unknowingly broke into Harrington’s house thinking it’s going to be business as usual but they could not be any more wrong!

Towering over the men, Harrington easily overpowered them and bound them up. Jail time would have been a pleasure for Morgan and Gorton at this point.

Unfortunately for them, Harrington did not call the cops on them but instead started assaulting them. You see, Harrington is actually a notorious gay sex predator and has had served jail time for several sexual assaults. These men have just walked into a bear trap.

According to reports, Morgan and Gorton were both kept as sex slaves and were sodomized for 5 days straight by Harrington. It was only when a neighbour heard the cries of the men and called the police did the nightmare stop. We can only imagine the horror, the pain, the trauma…

“They broke in my front door, so I broke in their back doors!” Harrington reportedly told the cops when he was arrested.

Morgan and Gorton are currently facing charges for breaking and entering, while Harrington is being charged with the assault.

This extremely tantalising news has captured the attention of many, causing people to debate if the assault was deserved. Certain reports also stated that it was all a hoax. Regardless, this was too funny to not write about and also a perfect story to tell! Admit it, you guys totally thought the two men deserved it as well.