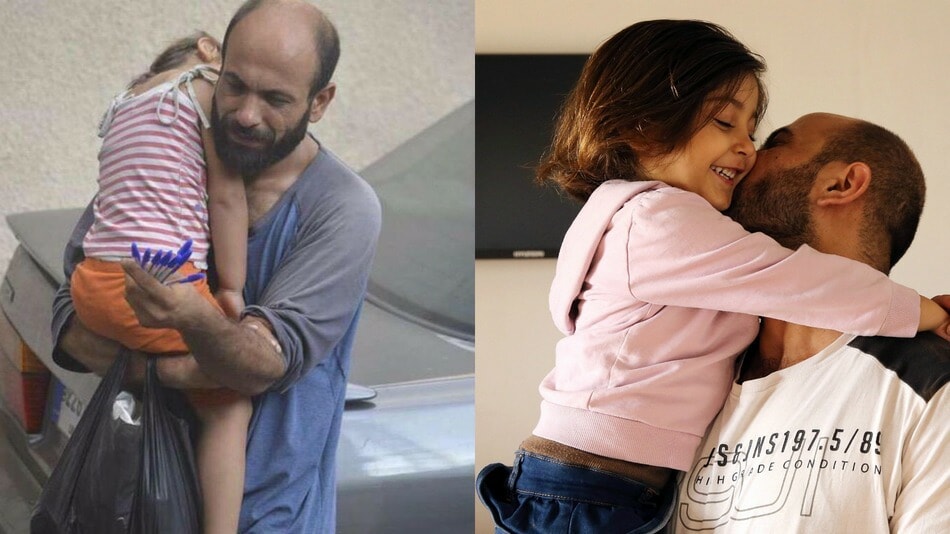 Abdul Halim al-Attar was a refugee from Syria who sold pens on the streets of Beirut to passing motorcyclist under the hot blazing Sun. The 33-year old who was carrying his daughter was photographed by a passerby and then it shared on twitter.

The photograph instantly went viral having touched people all across the world. One of those moved by his plight was an online journalist and web developer in Norway, Gissur Simonarson, who created a Twitter account under the name @buy_pens and an Indiegogo campaign to raise some money for al-Attar and his family. Although the fund goal was only set at $5,000, the campaign collected almost forty times more at $188,685 three months later. An additional $2,324 in donations came in after that.

Thanks to the kind hearted people from all over the world, al-Attar is now running three businesses in the city and employs 16 refugees to help with his business.

“Not only did my life change, but also the lives of my children and the lives of people in Syria whom I helped,” he said. He also told reporters that he gave away about $25,000 to friends and relatives in Syria.

Along the way, getting the funds to al-Attar has been a struggle. So far he has only received 40 percent of roughly $168,000. PayPal does not operate in Lebanon, so at the moment the cash is brought over to Lebanon bit-by-bit by a friend of the campaign who can make withdrawals in Dubai.

“Seeing that he opened a restaurant and his kids look well taken care of, I’m really happy. At the same time, I’m disheartened after seeing how difficult the disbursement has been, and complications with refugees not being able to open a bank account in Lebanon. I think that will be my last fundraiser.” Simonarson said in a phone interview from Oslo.

Despite his frustration and the uncertainty about when and whether he’ll receive the rest of his money, al-Attar feels grateful. He is breaking even with steady orders of fresh bread and shawarmas from nearby workers and families in the working class neighborhood of Ared Jaloul.

“I had to invest the money, otherwise it will be lost,” he said, bagging a roasted chicken sandwich.