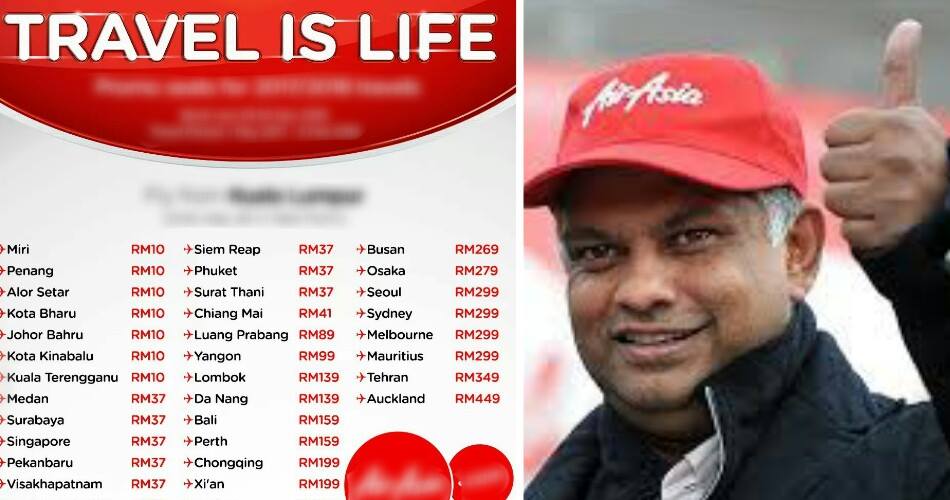 Good news to all wanderlusts! Local airlines are fighting to dominate the aviation market this year, and this means cheaper prices for all of us, The Star reported.

In 2016, airlines had a lot of profit even though they gave super low and discounted prices, and they were all competing tightly with each other too.

So for 2017, AirAsia, Malaysia Airlines and Malindo Air are expected to add 40 new aircraft to their current fleet, adding about 7,000 more seats!

AirAsia’s CEO, Tan Sri Tony Fernandes had hedged a massive amount of fuel required for 2017 at a super low price, so he was confident about this year’s profit.

“It is going to be a pretty good year especially with the weak ringgit (though) higher fuel prices.”

Meanwhile, Malaysia Airlines CEO Peter Bellew’s focus was set on what travellers wanted. He even planned to add 11 new destinations in China alone!

“A big focus for 2017 is fly to places where people want to go and where we can make money.”

“We will also take a hard look at the loss-making routes amid fuel prices rising and the weakening ringgit.”

But Malindo Air CEO Chandran Rama Muthy had a different goal in mind. He expected more passengers this year up to 10 million people.

So, Chandran plans on adding 10 new aircraft to the 42 that they already have. But they are looking at this globally!

“We may look into international expansion than expanding in the already crowded domestic space and this will be good for tourism and the country.”

Although adding 10 new airplanes sound amazing, AirAsia on the other hand will be adding 28 instead!

Due to the tough competition from last year, Bellew said that airfares will keep dropping especially in the later half of 2017 until 2018.

“Malaysia Airlines will avoid the worst of the fare cuts and there really can only be one winner in what I think will be the greatest battles in aviation history among low-cost airlines.”

Although times may seem tough for these airlines, it does seem to be pretty good for us Malaysians. Perhaps we can help these airlines by travelling more this year? 😉

I guess this is goodbye for now, Malaysia.