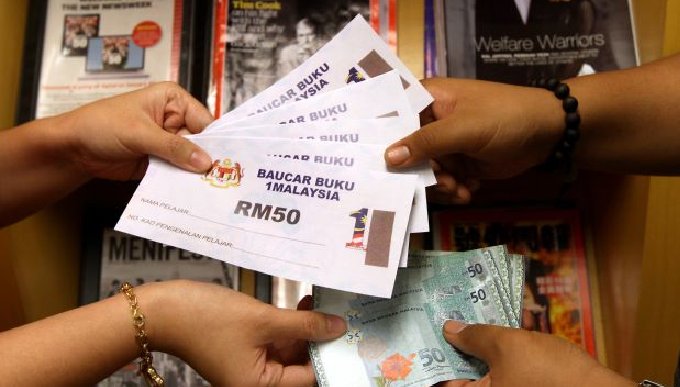 It’s not unlikely to hear that students who receive their 1Malaysia Book Vouchers (BB1M vouchers) are exchanging them for cash instead. One particular young male collected 120 vouchers each worth RM50 in an attempt to cheat the government’s money.

The 22 year old student set up an appointment with a man only known as Ah Chong around Shah Alam area. When the two met up, the student took out his stack of vouchers and wanted to hand it to him.

To his shock, two men wearing shirts with the word “Police” on them suddenly appeared with handcuffs. The policemen warned the student that he was breaking the law by cheating the system and subsequently confiscated his stack of vouchers before letting him go.

In a state of fear and worry, the student hurriedly left the scene. After he went home to calm his nerves, he thought more about what had just happened only to realise that they weren’t policemen at all and that he was cheated. He also strongly suspected that Ah Chong was most likely part of the scam.

The student went to file a police report on the incident.

Apparently he was not the only one fell victim to this new form of scam. Shah Alam OCPD Asst Comm Shafien Mamat said a syndicate had been luring unsuspecting undergraduates from public institutions to surrender their BB1M vouchers in exchange for money.

The plan is pretty ingenious because many people who try selling their vouchers are committing an offense so they are more unlikely to report the incident to authorities.

ACP Shafien suspects Ah Chong to be the mastermind and police forces are still on the hunt for him.

“We believe this syndicate has been active since early this year. Its modus operandi is to offer cash for the vouchers, followed by a meeting at a location.

“Then, the bogus policemen would appear and seize the vouchers, making the victims believe their story,” he said to The Star.

The BB1M program was initiated by the government in an attempt to aid students in buying the tools needed for their education. These vouchers may be used in most bookstores for books, calculators, pens and so on. However, some abused the system by selling their vouchers for cash.

It’s known that the standard exchange rate would be a RM50 difference for profit for the bookstores, such as RM250 vouchers will be sold for RM200 cash. It is reported by The Star that some rates range between RM190 to RM230 cash.