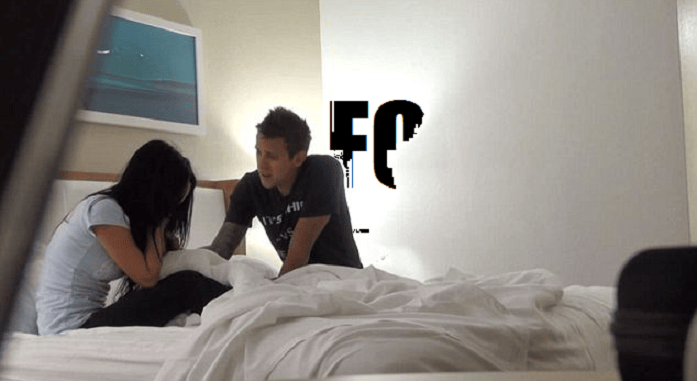 We’ve trawled through many bad reviews and heard whispers of Airbnb horror stories, but this one is a rarity: an Airbnb host left a bad review after accusing a young woman for sleeping with her boyfriend!

Get your little paws nice and cosy for this juicy story which recently happened to a Singaporean.

A woman and her friend, Alice* decided to go on a quick getaway at an unnamed location. Alice had been backpacking solo across the region and invited the woman along. Taking it as a good idea, she booked her flights and found both of them an affordable place to stay on the vacation rental site, Airbnb.

And the guesthouse was described as a “gem of a find”:

“It was located near the city centre, looked spacious and comfortable, and renting a room cost less than $15 a night I contacted the host, Gen* and managed to secure my booking for two nights.”

When they touched down and arrived at the guesthouse, Gen was nowhere to be seen but instead, a Caucasian man showed up and introduced himself as Antonio* which is the owner of the property. Apparently, he ran a tour agency from the first floor of the building, so the woman simply assumed that Gen in the Airbnb profile picture was one of his staff.

Antonio, well – he was described by the woman as “warm and friendly” person who would kindly recommended places of interest and good restaurants for dining. Overall, “We had a great time”.

On the third and final day of the short getaway, the woman said goodbye to her friend, Alice, who had decided to head straight to her next destination whilst she herself wanted to spend a day at the spa.

The woman returned home to Singapore, and resumed life as per usual. However, one day out of the blue popped up an Airbnb review from no-one other than Gen herself. And the review she left was jaw dropping:

“She came to our home. She booked two nights, but stayed an extra night in my boyfriend’s bedroom and slept with my boyfriend while I wasn’t there.”

To add salt to the wound, the false review is publicly visible on her profile!

The review didn’t make any sense to the woman, and she furiously replied: “Look, I don’t know who you are but I definitely did not sleep with anyone’s boyfriend. I stayed in the city for exactly two nights and came home to Singapore. I am furious that you would say slander me in this way!”

Gen’s reply was quick and it began with:

“I am so sorry if you’re the one who left after two days,”

This was when it dawned on the woman that perhaps the mysterious boyfriend-snatcher-cum-lover could perhaps be her friend Alice. She looked back on the trip and remembered that Alice had spent a good hour speaking with Antonio at the front desk. Alice had said she needed to ask for directions to her destination, and tried to whisk her away saying that she should head back to the room first.

Gen continued, “Your friend was the one who stayed. I don’t live in the city – I only visit about once a month.” She found out about the suspicious affair through neighbours, “They told me my boyfriend took a customer around the city and had dinner with her.

“It all sounded very strange to me, so I checked with the staff about your booking and found that you had only reserved two nights at our guesthouse. We had no available room for a third night.”

In the end, Antonio had taken Alice for a tour of the city and ended it with dinner. After, they returned to the guesthouse and shared a bottle of wine. “He confessed to all of these things and to letting her sleep in our bedroom but denied having sex,”, Gen explains.

“I feel so tired. You cannot imagine how heartbroken I am. Maybe they really did not have sex, but your friend is single and can do whatever she wants. We had planned to get married but I’ve called it off and ended our relationship.” Gen profusely apologized for the trouble she had caused and promised to write to Airbnb in order to remove the review.

…Woah. Most Airbnb horror stories revolve around the guesthouse or the host, but stories like this about a guest-from-hell? The girl has no taste to come into someone else’s home and bat her eyelashes around, but then again, Gen had just dodged a bullet from a man with a straying heart.