Helping others is truly a great thing. What better way to help people than to do charity work right?

Well, one guy proudly boasted about the charity work he did in conjunction with his birthday. In his Facebook post, he shared a picture and a description of his sense of achievement.

“This birthday I wanted to do something different. I decided to give rather than to receive. It may just be a small giving & to only one family but what a wonderful feeling it was having to see joy & happiness coming from them!”

“We can’t help & save everybody but we can make a difference in somebody’s life! It only takes a spark to start the fire burning!” 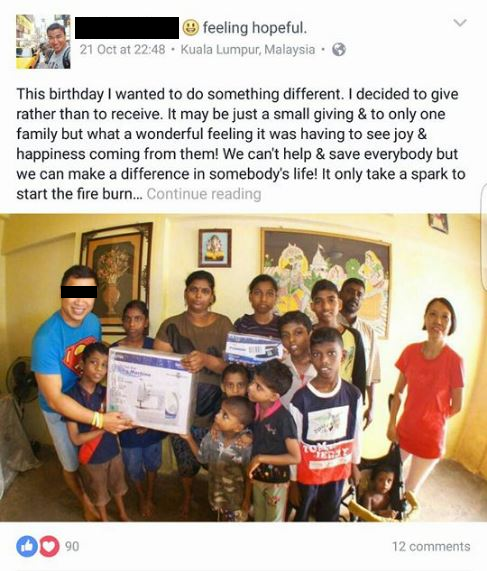 The man who’s in blue is apparently a motivational coach and his picture received about 90 likes from his friends. However, it turns out that the guy wasn’t even a donor!

Some of the people in his network who knew the true story behind this picture mentioned that he actually DIDN’T do anything at all… well except help drive the vehicle.

Apparently, this guy only helped Kechara good-doers by driving them to the family’s home. For those who has never heard of Kechara, they are a well-known international charity organization. Not only do they do charity for the poor and needy, they also do so for animals.

Anyway, what’s infuriating is that he did not donate any of those goods to the family as he daringly implied. 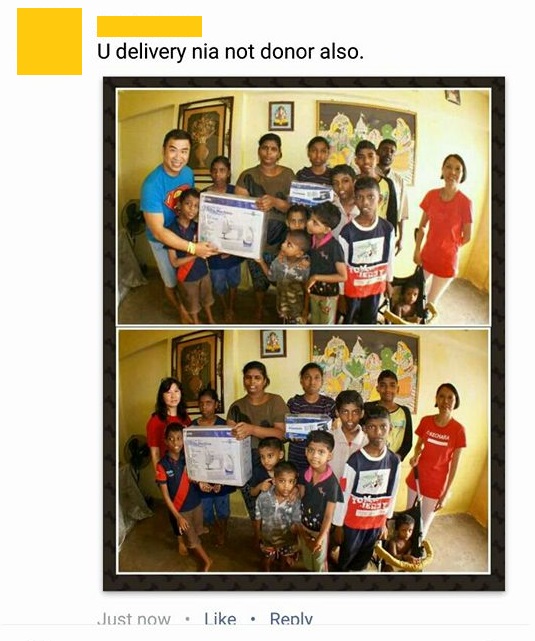 An exasperated Madhu Sevan shared the story of the man’s deceit on his Facebook.

“If you can see the lady on the extreme right..she was actually wearing a Kechara t-shirt..but he already edited the baju making it look like a plain red t-shirt.”

So, not only did he lie about doing charity, he tried to steal Kechara’s good deed and claim it for himself.

According to other netizens, the fraudulent man would remove anyone’s comment regarding his big fat lie within seconds! Not only that, he will even block those commenters for good measure.

Netizens who came across this issue were enraged that this man could make up such a blatant lie.

“It is not charity when you want fame and use other people’s kind heart. Karma will come around anyway. Happy birthday since you were the angel according to your post.”

“Omg what a low esteem guy he is. Idiot. Earn your credits, not snatch them. People like that are image spoilers for others. Moron.“

“Use people fame as your own ….tak malu…phuiiii..“

Well, if he had wanted to become famous by doing honest charity, then he should probably followed in the footsteps of Mr. Kuan Chee Heng.

Read More: This Malaysian Man Isn’t Rich But His Big Heart Is Something EVERY Malaysian Should Also Have